Before the One Map Policy (OMP), Ministries, Institutions and Regional Governments (Pemda) in Indonesia collect data, maps and geospatial information individually. This resulted in the worsening overlapping land use issue, exacerbating land conflicts in the country.

President Joko Widodo accelerated the implementation of OMP through Presidential Regulation No. 9/2016, enabling the OMP geoportal to be launched in 2018. In addition to basic maps, the geoportal stores thematic maps from different government agencies that are expected to help resolve land conflicts.

President Jokowi quipped that many fears the implementation of OMP. How does that "fear" manifest in reality? Here are three examples of land conflicts in Riau, the province with the highest rate of land conflicts in Indonesia (42 cases out of 410 cases or 807,177.6 Ha).

Out of the targeted 85 thematic maps, 83 have been compiled and integrated by OMP. One of the remaining ones is the village boundaries map. President Jokowi has highlighted the urgency for Regional Heads to determine village boundaries. Many of them remain undetermined due to the existence of natural resources, scattered small-scale agricultural lands/plantations and the misinformed custom to use customary land as village boundary marker.

Take Rokan Hulu Regency, territorial conflict has arisen due to a community palm oil plantation that is located within a Protected Forest Area. Conflict resolution efforts have been made through the implementation of Social Forestry (Perhutanan Sosial/PS) in several villages, which provides land management license that allows people to continue the cultivation of land within a Forest Area under the sustainable forest management system. However, land boundaries were not agreed with the neighboring villages prior to the implementation of Social Forestry. Some Social Forestry licenses even cover lands that are located in another village.

According to findings in a Forest Management Unit (Kesatuan Pengelolaan Hutan/KPH) at the border of Kampar and Rokan Hulu Regencies, a community palm oil plantation has encroached more than 80 percent of a protected forest. The forest area has been considered a "no-man's land" for years due to the KPH’s lack of action. Since the establishment of KPH in Riau, progress has been slow compared to other provinces. Most KPHs in Riau were not even institutionalized until the end of 2017. 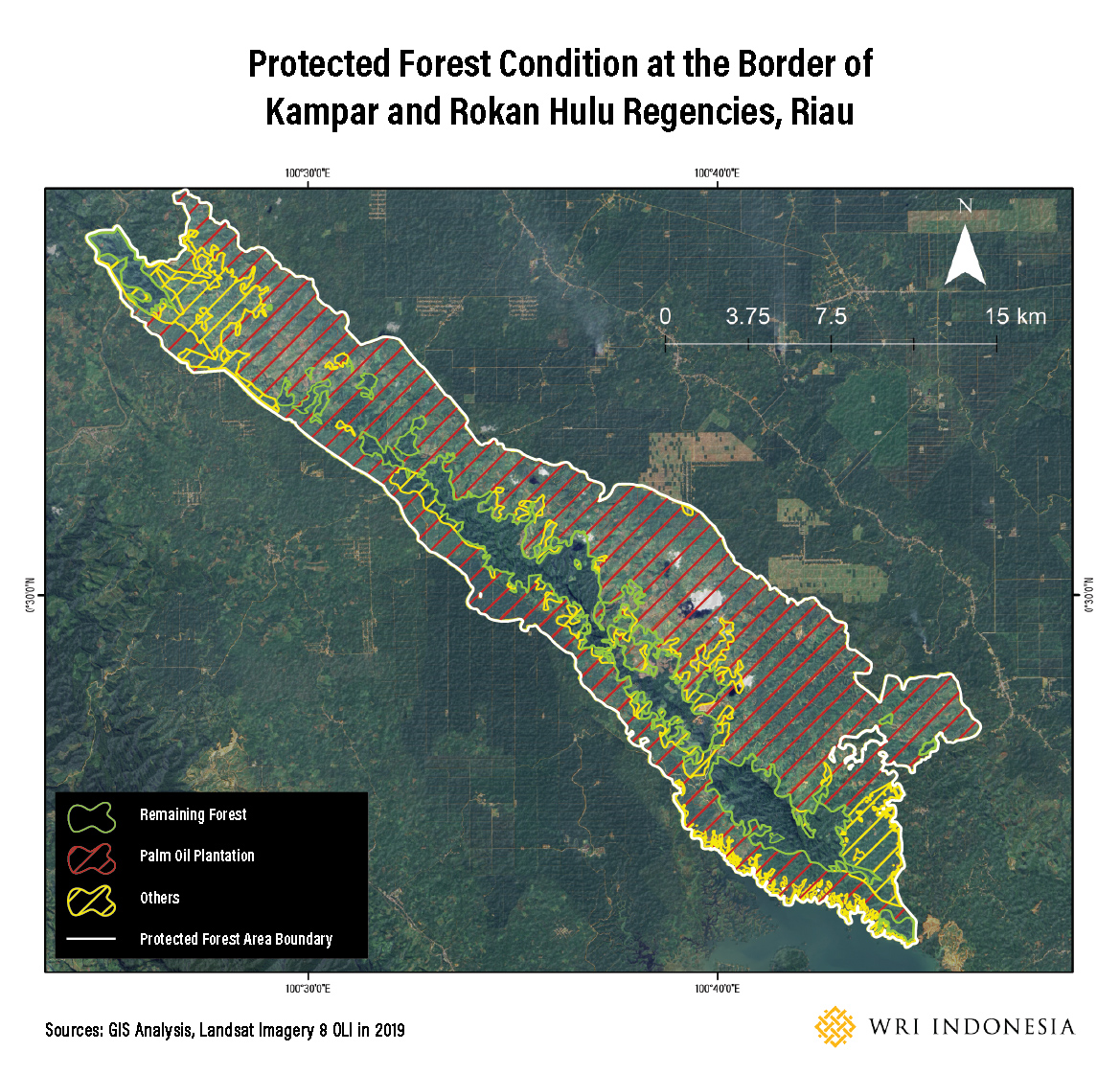 This is just one example of conflicts relating to palm oil plantations within a forest area in Indonesia. As a forest management unit, KPH has a vital role in ending conflicts in forest areas. However, only 12 out of 37 KPHs in Riau have completed their Long Term Forest Management Plan (Rencana Pengelolaan Hutan Jangka Panjang/RPHJP) today, making it difficult to plan budget and conflict resolution.

In Kampar Regency, 7 Customary Law Communities (MHA) have been fighting for recognition of their territories for 10 years without any result. Several factors come into play, including the presence of Customary Area in a Conservation Forest or in a palm oil plantation with Land-cultivation Permit (HGU). 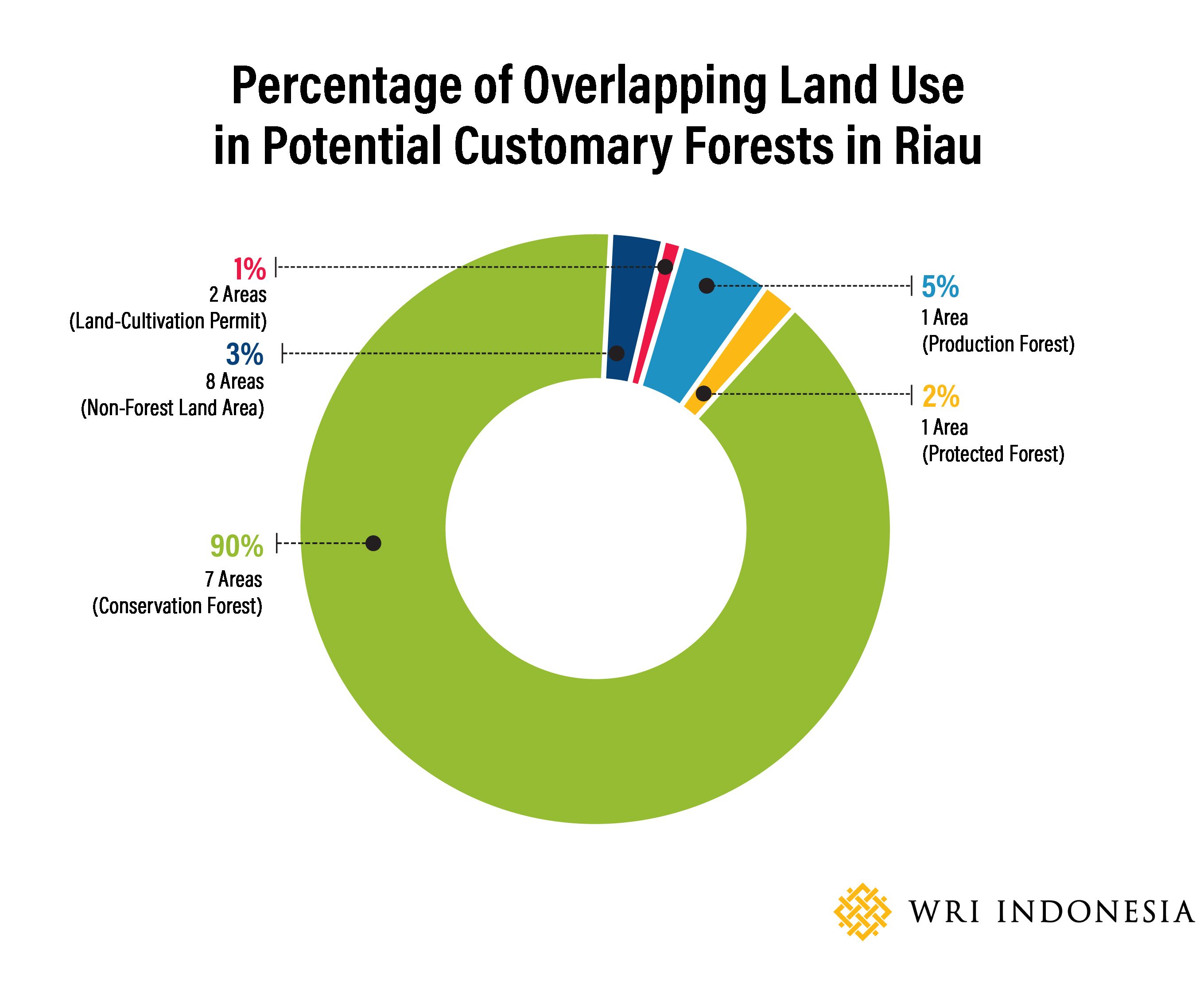 How Can the OMP resolve land conflicts?

Based on such cases, which also occur in other provinces, maps for Village Boundaries, Community Plantations, Customary Area Potentials and Social Forestry are crucial for the implementation of the OMP. Unfortunately, the last 3 maps mentioned are not priority thematic maps of the OMP today. As a matter of fact, no map in the OMP geoportal is currently accessible by the public. Public access is an absolute necessity if the government wishes to use the maps to help resolve land conflicts.

2. Optimizing the Role of Regional Governments as Spatial Data Managers

As the executive of the OMP, the Geospatial Information Agency (Badan Informasi Geospasial/BIG) has highlighted the vital role of regional governments as a network node in the OMP implementation. Riau Government, for instance, has issued Gubernatorial Regulation (Pergub) No. 5/2019 concerning One Data One Map, geospatial information management unit and a geoportal that is connected to the national government. However, the cases in Riau prove that regional governments have to be involved locally, for example as a mediator between 2 villages in territorial disputes.

The Working Group on Forest Land-Tenure (WG Tenure) and Customary Forest established by the Social Forestry Acceleration Working Group (Pokja PPS) in South Sumatra and the Natural Resource Conflict Management Team in Musi Banyuasin Regency are great examples of how conflict resolution is reached through institutional approach. The two teams consist of representatives from various agencies, such as Provincial or Regency Governments, OMP and non-governmental organizations. Meanwhile, the role of the Pokja PPS has been intensified in Riau based on the amendment to a Governor’s Decree.

Inadequate human resources is one of the reasons for the slow OMP progress. Technical mapping skills are generally only possessed by regional government officers in certain institutions, such as Environment and Forestry Office, Regional Development Planning Board and Public Works and Public Housing Office. Students in local universities can contribute to this initiative through trainings, researches and engagement activities. For example, Riau University, the BIG and Siak Government called on the participants of Students Community Service to carry out participatory village mapping in one of its sub-districts. At the end, the students successfully pushed for boundaries to be agreed on in 7 out of the 13 segments in the village.

The locals are the ones who truly understand the potential of the area where they live as they are directly involved in its management. The BIG facilitates local-community-based participatory mapping through the PetaKita apps. This apps, however, needs to be developed further to cover areas that have no Internet access. Next, the Regional Government can use the output of participatory mapping as needed for the OMP.

The completion of the OMP geoportal and its maps is commendable, but these data are only valuable if they can be used to resolve land conflicts. Ultimately, without adequate efforts, land conflicts will not be resolved or even continue to get worse.