Floods in Indonesia make the news almost weekly in print and electronic media. Just in the first four months of 2019, several flash floods gushed into provinces all over Indonesia, such as the floods and landslides in South Sulawesi, Papua and most recently in Bengkulu.

According to the analysis of Aqueduct Global Flood Analyzer, Indonesia, with 640,000 people, is the world’s 6th largest population to be affected by flood every year. The Indonesian National Agency for Disaster Management (BNPB) data shows that flood occurs 464 times annually in Indonesia, making it the most frequent natural disaster nationally. Flood followed by landslide is the 6th most frequent disaster in Indonesia at 32 occurrences each year. Three most highlighted causes of flood and landslide are tree cover loss, extreme weather and watershed topography.

Tree cover plays an essential role in maintaining the hydrological balance of a watershed, enabling the soil to constantly absorb water. The high level of organic substances keeps the soil porous while the presence of roots eases water absorption into the ground. Diminishing tree cover will disrupt the local hydrologic balance. This will lessen the absorption of rainfall into the ground, trapping the water on the surface. For example, the analysis of Global Forest Watch (GFW) indicates the loss of 887 hectares of tree cover on Cyclops Mountains, Papua, between 2001 and 2018, resulting in the flooding of Waibu, Sentani and East Sentani Districts.

The GFW study also suggests that within the same period, the Jeneberang (South Sulawesi Province) and Bengkulu (Bengkulu Province) watersheds lost 1,990 hectares and 11,400 hectares of tree covers, respectively. Rampant forest encroachment and illegal mining have damaged watershed upriver, raising the risks of flood and landslide. It must be pointed out that that the tree cover loss is just one of the causes of flood and landslide. Other factors come into play, such as extreme weather and the local topography.

High intensity of rainfall (generally more than 100 mm per day) for long stretches of time often contributes to flooding in Indonesia. Daily rainfalls of 248.5 mm, 110-197 mm and 182-289 mm were recorded in Jayapura Regency in Papua, South Sulawesi and Bengkulu, respectively, when floods and landslides hit those regions.

The cause of extreme weathers in South Sulawesi and Bengkulu was Madden-Julian Oscillation, a natural phenomenon that increases the volume of moist air that causes high rainfall in most of Indonesia. In the meantime, convergence and increasing clouds due to the low air pressure in the north of Papua are suspected to be the cause of intense rainfall in Papua.

Flood is also affected by the local topography or angle slope. For example, in Jayapura Regency, a large part of the slopes on the Cyclops Mountains is very steep (>40%), significantly contributing to flash floods in the area. The steeper a slope is, the faster the water flow will be, and the more damaging a flash flood will be. 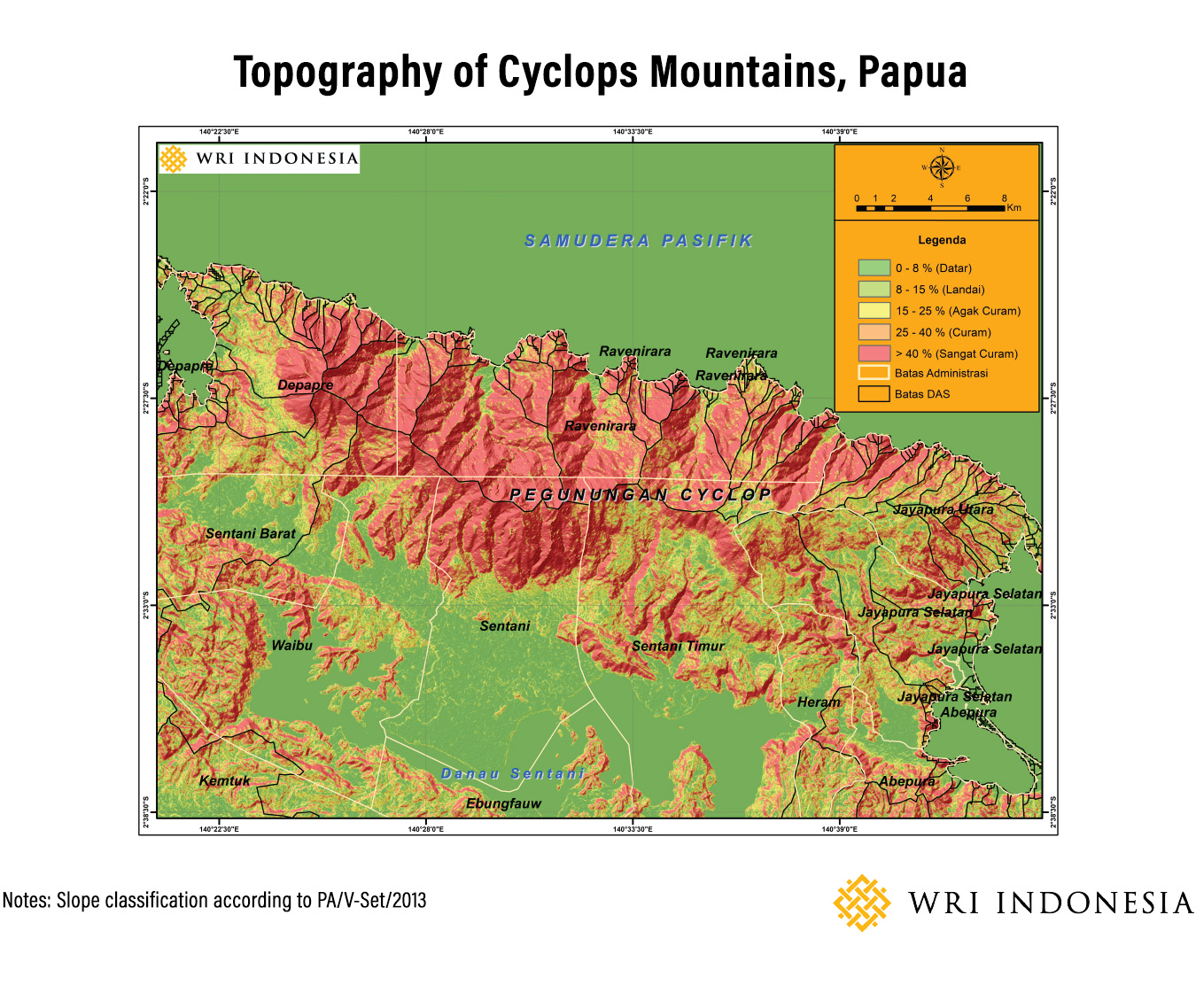 When a topography is dominated by very steep slopes, natural dykes will be formed. They form when slides intrude the gap between two hills. This will block water flow up to a certain volume. When a natural dyke can no longer hold the water, the water will be released, carrying the materials in its path, such as soil, trees and rocks.

The local topography must have also been the cause of the flooding in South Sulawesi and Bengkulu, but because the angles of the slopes in both watersheds are mostly flat (0-8%) to steep (25-40%), it must have had lesser effect than that of the topography in Cyclops Mountains, where the slopes are mostly very steep (>40%). 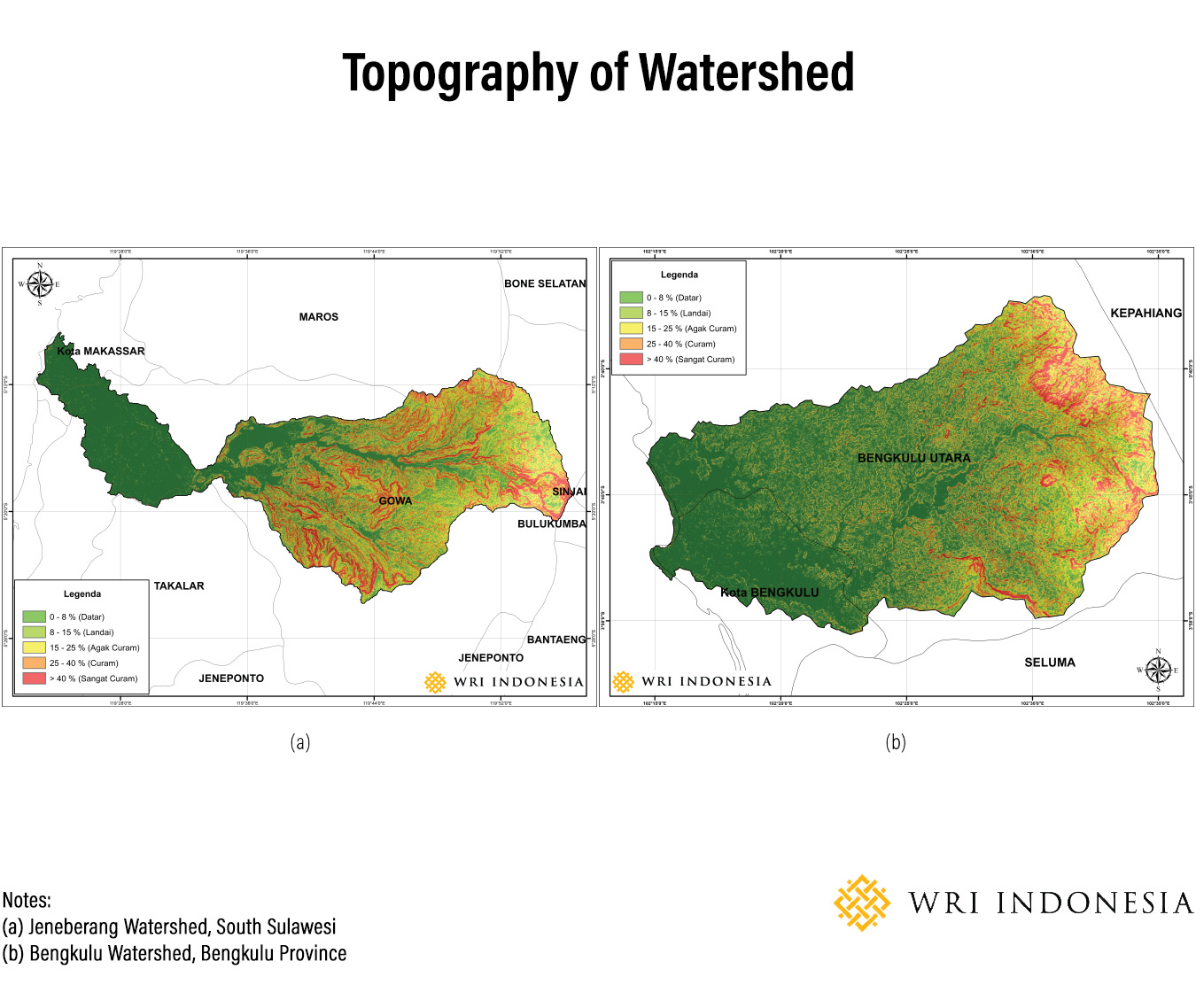 Mitigation and Adaptation Efforts against Flood

Several efforts can be made to minimize the risks of flood and landslide. These include maintaining and expanding tree cover in watersheds so that the function of forests as effective water storage can be restored. We also need to monitor the threats of logging activities from forest encroachment and mining in watershed areas. Platforms such as Global Forest Watch monitor weekly tree cover loss, which can be instrumental in promptly identifying deforestation so mitigation efforts can be implemented by the authorities. Critical forest and land rehabilitation as part of flood mitigation has also been a priority of the government.

We also need to manage risks of flood and landslide from inevitable natural conditions. One adaptation effort is the development of early flood warning system. The prototype is currently being developed by the government, academics and private sector. Examples are Jakarta’s Flood Early Warning System and PetaBencana.id.

The Geospatial Information Agency (BIG), Meteorological, Climatological and Geophysical Agency (BMKG) and the Ministry of Public Works and Housing (PUPR) have also developed a map of flood-prone areas in 2017, although it only covered several regencies/cities in Java. The BNPB, BIG, BMKG, PUPR and regional governments need to regularly update the maps of areas that are prone to flood and landslide and prepare comprehensive adaptation strategies that suit the different local conditions.

For instance, the BNPB and BIG can draw watershed maps of flood risks to be updated with each rainfall data input from the BMKG. Thus, when the intensity of rainfall exceeds the flood risk threshold, the BNPB and regional government can give early warning to the residents faster to prevent casualties.