As the human tragedy of the COVID-19 pandemic worsens, global restrictions to stop the spread of the virus — including stay-at-home orders, business closures and travel prohibitions — may contribute to the worst economic downturn since the Great Depression. The virus has already made an indelible impact on the energy sector: Global energy use is predicted to fall 6% over the course of 2020; the renewable energy industry has not been spared.

According to Wood Mackenzie estimates, 2020 global solar and energy storage installations are expected to drop nearly 20% compared to pre-COVID-19 projections; wind turbine installations are expected to decline by 4.9 gigawatts (GW), a 6% decrease. Declining renewable energy installations and energy efficiency measures led to 106,000 lost jobs in March alone in the United States, compared to 51,000 drilling and refining jobs lost over the same time period. Analysis shows that 15% of the country’s total clean energy workforce1 could be lost over the coming months — more than a half-million jobs.

As governments around the world ramp up stimulus packages to create jobs and reflate their economies, two things are clear: 1) We should invest in things that strengthen the health and well-being of our citizens; and 2) We must look at reducing economic and infrastructure vulnerability. Propping up old, polluting industries is not a solution.

Renewable energy, on the other hand, reduces air pollution, making people less vulnerable to disease. About 4.2 million deaths every year are linked to air pollution and exposure, while a recent Harvard analysis showed that people living in contaminated cities were more likely to die of COVID-19. It can help avoid greenhouse gas emissions and protect communities from dangerous effects of climate change. Renewable energy is the cheapest source of new power generation for more than two-thirds of the world and has no fuel costs. It can reduce the economic burden of energy bills by eliminating fuel charges — especially when coupled with energy-efficiency upgrades in our homes and businesses.

Now more than ever, it’s vital that countries put renewable energy and other low-carbon technologies at the fore to build back better after COVID-19, creating new jobs and rebooting their economies.

Prior to the coronavirus outbreak, the world was on a trajectory to shift investment from polluting fossil fuels toward renewable energy: Bloomberg New Energy Finance (BNEF) estimated last year that between now and 2050, 77% of investments in new power generation will be in renewables. It’s important that governments and investors treat COVID-19 not as a signal to slow down, but to speed up. New research shows that 75% of Americans are in favor of prioritizing the clean energy industry over the fossil fuel industry in stimulus packages, while 67% support providing financial assistance to renewable energy companies to address the economic crisis.

Here are three reasons why stimulus packages must include renewable energy investments:

1. Clean energy yields an economic return 3 to 8 times higher than the initial investment.

The International Renewable Energy Agency’s (IRENA) new 2020 Global Renewables Outlook assesses the socioeconomic impact of several scenarios. The “Transforming Energy Scenario” —an ambitious-yet-realistic energy transformation that would limit global temperature rise to well below 2 degrees C (3.6 degrees F)— would cost $19 trillion more than a business-as-usual approach, but would bring benefits worth $50-142 trillion by 2050, growing the world’s GDP by 2.4%. To go one step further, IRENA’s “Deeper Decarbonization Perspective” — which outlines a net-zero-emissions world by 2050-2060 — would cost anywhere between $35-45 trillion, but yield $62-169 trillion in cumulative savings when considering avoided health and social costs from reduced air pollution. 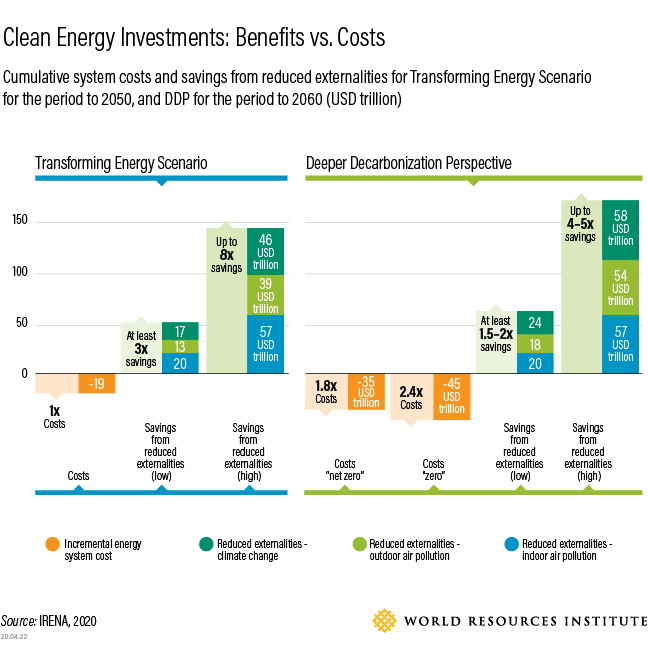 2. The instability of fossil fuel prices presents a global opportunity to accelerate the shift to clean energy.

The fossil fuel industry is among the hardest hit by the coronavirus crisis, with leading oil, gas and petrochemical companies losing an average of 45% of their total market value. Since the start of the year, we have seen the sharpest drop in oil demand in a quarter of a century. The price of crude oil in the United States turned negative for the first time in history.

While lockdown orders have certainly exacerbated the fossil fuel industry’s challenges, this structural collapse was a long time coming. Over the past decade, the fossil fuel industry has spent more money on stock buybacks and dividends than it has brought in in revenue, making energy the worst-performing since 2009 of the 11 sectors in the S&P500. Additionally, some of the world’s largest financial institutions continue to rapidly divest from fossil fuels, recognizing the growing financial risks of carbon-intensive investments. According to the Center for International Environmental Law, this means that “in the medium term, the prospect of a full recovery for many of these revenue streams is, at best, uncertain, and, in many cases, unlikely.” 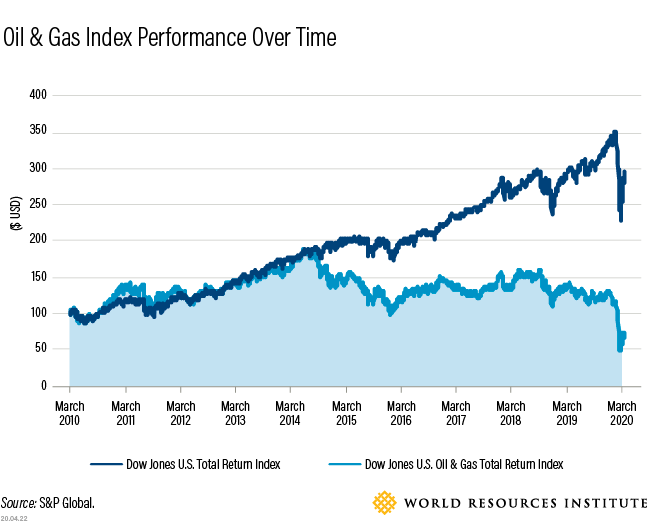 Research shows that the world needs to halve energy-related carbon dioxide emissions by 2030, halve them again by 2040, and then aim for net-zero emissions by 2050 — with substantial reductions beyond — in order to prevent the worst effects of climate change. For economies to build back better and more sustainably, we must start by severing our reliance on fossil fuels.

Doing this will require eliminating the more than $5.2 trillion in annual subsidies, tax breaks and uncharged external impacts (such as on air pollution and climate) of fossil fuel production and use. It also means addressing industry and transportation — two of the most polluting sectors today, responsible for more than half of all global greenhouse gas emissions.

To decarbonize industry, we must promote industrial energy diversification into low-carbon technologies such as concentrated solar thermal for hot water, hydrogen or ammonia. Further, to transition the transportation sector away from fossil fuels, we must bolster bus and vehicle electrification efforts and the capacity to charge them with 100% renewable electricity, while also supporting new forms of urban mobility and transit systems. In the wake of COVID-19, global sales of electric vehicles are expected to plunge by more than 40% in 2020. Electric vehicle and bus incentives, along with grid and charging infrastructure, will be needed to put electrification targets back on track.

3. Ambitious investment in renewable energy and energy efficiency could lead to 63 million new jobs by 2050.

Today, more than 11 million people work in the renewable energy sector globally, while 3.3 million people work in the energy efficiency industry across the United States and Europe alone. According to the International Energy Agency, most energy-efficiency jobs directly create local employment opportunities within small- and medium-sized businesses.

Under IRENA’s “Transforming Energy Scenario,” the number of renewable energy jobs worldwide could more than triple, reaching 42 million jobs by 2050, while energy-efficiency jobs would grow six-fold, employing more than 21 million more people over the next 30 years. The job total rises to 100 million when considering the impact on the overall energy sector, including transition-related jobs such as infrastructure and grid flexibility, in addition to conventional technologies including fossil fuels and nuclear energy. By contrast, the fossil fuel industry is expected to lose more than 6 million jobs over the same time period, compared to today’s employment levels. 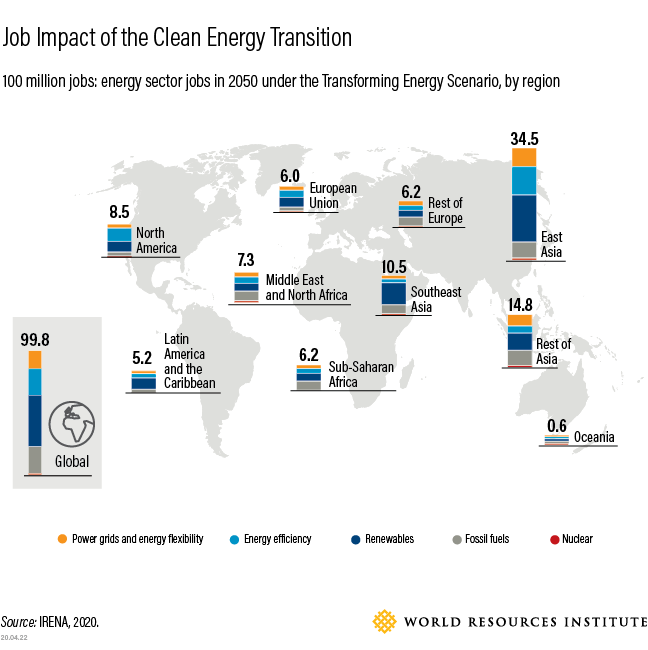 But it’s not enough to just invest in renewable energy. While millions of jobs will be created as we transition towards cleaner forms of energy, the job security of those in fossil fuel industries will be simultaneously put at risk. Starting now, governments must proactively plan for “just transition” strategies for affected workers and diversify economic activities in affected communities. It is essential that we give fossil fuel workers the opportunities to continue working by implementing re-training and educational programs, including for new jobs in renewable energy or energy efficiency. Some of the skill sets amongst these industries already overlap. Workers in the oil and gas industry are particularly well-positioned to make the transition to work in the offshore wind industry, for example, as these sectors share both technologies and supply chain elements.

A Low-Carbon World After COVID-19

The decisions world leaders make today will affect the world long after the coronavirus crisis recedes. They are faced with a choice: Reopen economies powered by the failing fuel sources of the past, or jump-start their paths toward a clean, secure and prosperous future. Governments who embrace renewable energy and energy efficiency will not just inject cash into their economies; they will protect their citizens’ health and welfare in a stable, sustainable and resilient world.