Around 98 percent of forest and peatland fire in Indonesia is manmade, either intentionally or due to negligence. An example is improper peatland management, such as land clearing for farms and plantations. Such land clearing is usually followed by burning, while dry peatland is highly susceptible to fire.

In 2019, forest and land fire destroyed at least 1.6 million hectare of land in Indonesia, including 500 thousand hectare of peatland. From January to December 2019, there were 55,006 fire alerts across seven priority provinces for peat restoration. It reached its peak in September.

To prevent and mitigate fire, the government has issued Law Number 32 of 2009 on Environmental Protection and Management prohibiting the use of fire for land clearing. The law prescribes that land burning is punishable by 3-10 years of imprisonment and Rp3-10 billion in fines. However, burning continues to be a popular method for land clearing today among individuals as well as corporations. Many choose that method for land clearing because it’s easier and cheaper, and it’s presumed to improve the fertility of the soil. When in fact, burning is bad for peatlands.

These are four reasons why burning for land clearing is bad for peatlands’ biophysical condition:

1. Damaging to the peatland’s fertility

Peatland is known for its high acidity. Many think that burning peatland will reduce the acidity of the soil when in fact, peatland’s acidity will return several years after the burning because the ash from the fire will be carried away by seeping rainfall or surface runoff. In addition, burning peatland reduces the nutrients required for plants to live on a peatland. These nutrients include nitrogen, which is needed in large amount and is key to plant growth.

2. Damaging to the soil’s capacity to store water

The surface layer of peatland will dry, making it susceptible to fire, when the drainage is too deep. When a peatland is dry, it will lose its ability to keep or store water (irreversible drying). This condition will also occur when peatland is exposed to a temperature of 80 degrees Celsius or over, and a burned peatland can reach a temperature of 1,000 degrees Celsius. Rising temperature of the surface layer of peatland will result in the increase of hydrophobic components, leading to the peatland losing its capacity to store water. When exposed to intense fire, peatland will lose almost a quarter of its capacity to store water. As a result, the peatland’s natural vegetation will be dehydrated during the dry season.

3. The loss of carbon storage in large amount

Peatlands only account for 3 percent of land in the world, but they store up to 550 gigaton of carbon or equal to 30 percent of the world’s soil carbon. Indonesia’s peatlands store up to 57 gigaton of carbon or 20 times more than mineral soil. Forest and land fires in 2019 released 109 million ton carbon dioxide equivalent, 82.7 million ton of which was generated by below ground peatland emission. This will worsen the impacts of climate crisis that we have begun to experience today.

Peatland burning can accelerate land subsidence. Burned peatland is usually lower in height than the unburned peatland around it. This creates a space for water to accumulate during the rainy season, flooding the land. When the land reaches the drainability limit, a condition where drainage is no longer possible, the land will be permanently flooded.

In addition to accelerating subsidence, continuous land clearing by burning will cut away the organic layer and destroy the peatland. 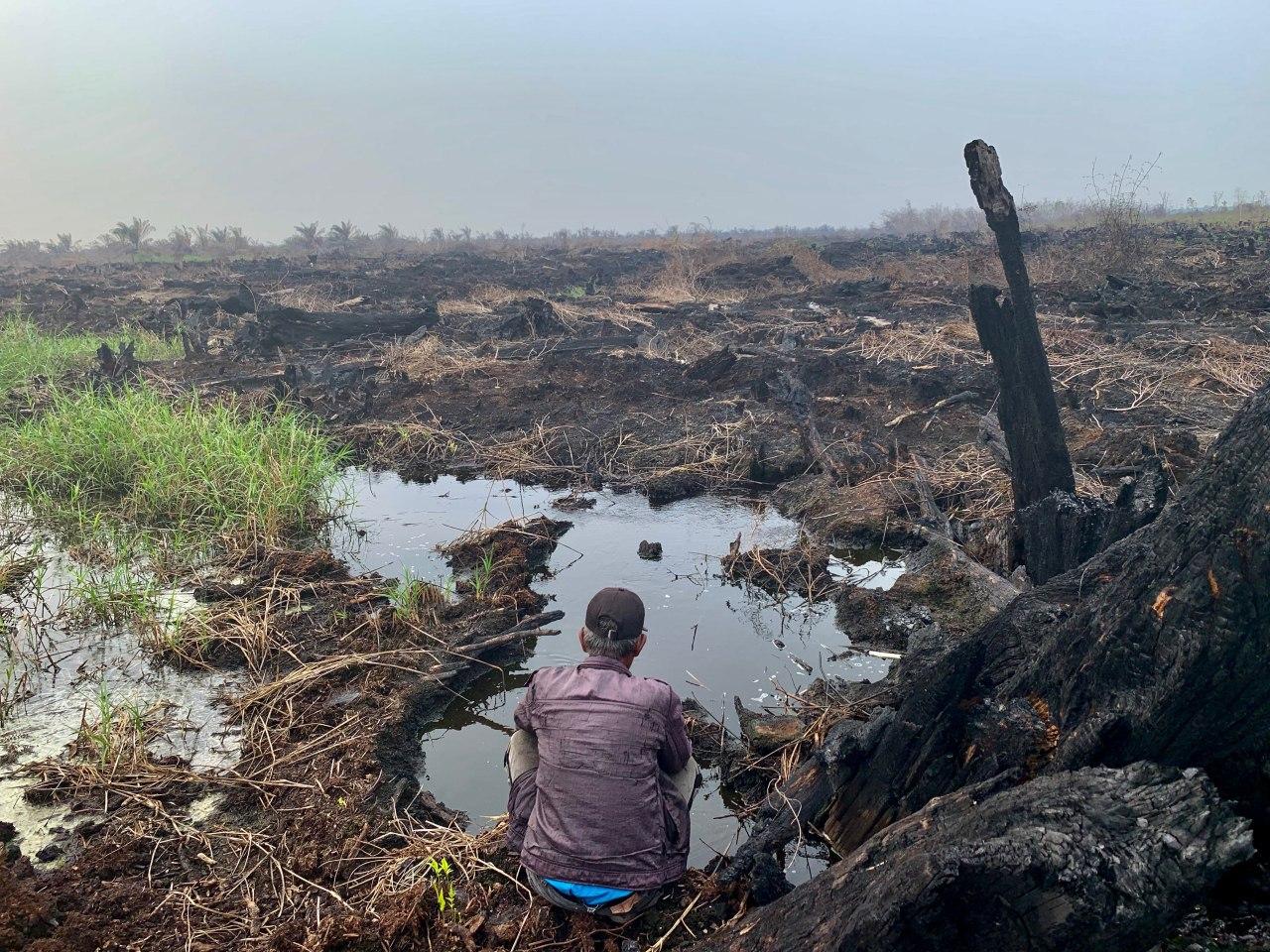 Community awareness that there are other means to clear peatland clearing than burning is extremely low. In addition to the fact that burning is the easier, cheaper and faster option for land clearing, there is the assumption that previously burned land can be sold at more than seven times higher prices. Because of these factors, peatland burning remains rampant.

There are many success stories of people managing their peatlands without burning in Indonesia. Land clearing can be done manually by uprooting the trees, leveling the soil and then plowing the land. To maintain soil fertility, composts and natural fertilizers are great alternatives.

To support peatland sustainability, peatland friendly practices must be used, which includes keeping peat wet. Choosing vegetation that is adaptable and tolerant to acid and flooding in peatlands is one of the many land management options that don’t involve burning. A possible vegetation is swamp rice, which can be cultivated in light peatlands. Picking vegetation that is tolerant to flooding also has the added benefit of indirectly supporting peatland rewetting.