Indonesia committed to reduce its emissions 29 percent below business-as-usual projections by 2030—41 percent if it receives international aid. While the country’s 34 provinces will be largely responsible for delivering these reductions, we know surprisingly little about them or their emissions sources.

There’s scant accessible information about climate actions and emissions data at Indonesia’s subnational level. Even when this data is available, it is often provided in a format that prevents it from being further analyzed. That makes it difficult to understand how provinces should be taking action to reduce their emissions, or hold them accountable for doing so.

As part of Indonesia’s 2011 National Action Plan to Reduce Greenhouse Gas emissions, each province needed to submit a local climate action plan, known as the Regional Action Plan of Greenhouse Gas Emissions, or RAD-GRK. The RAD-GRKs are crucial to our understanding on the scale of each province’s emissions. Using publicly available data, we can now learn about the top absolute emitters, per capita emitters, as well as intensity emitters in Indonesia as of 2010. 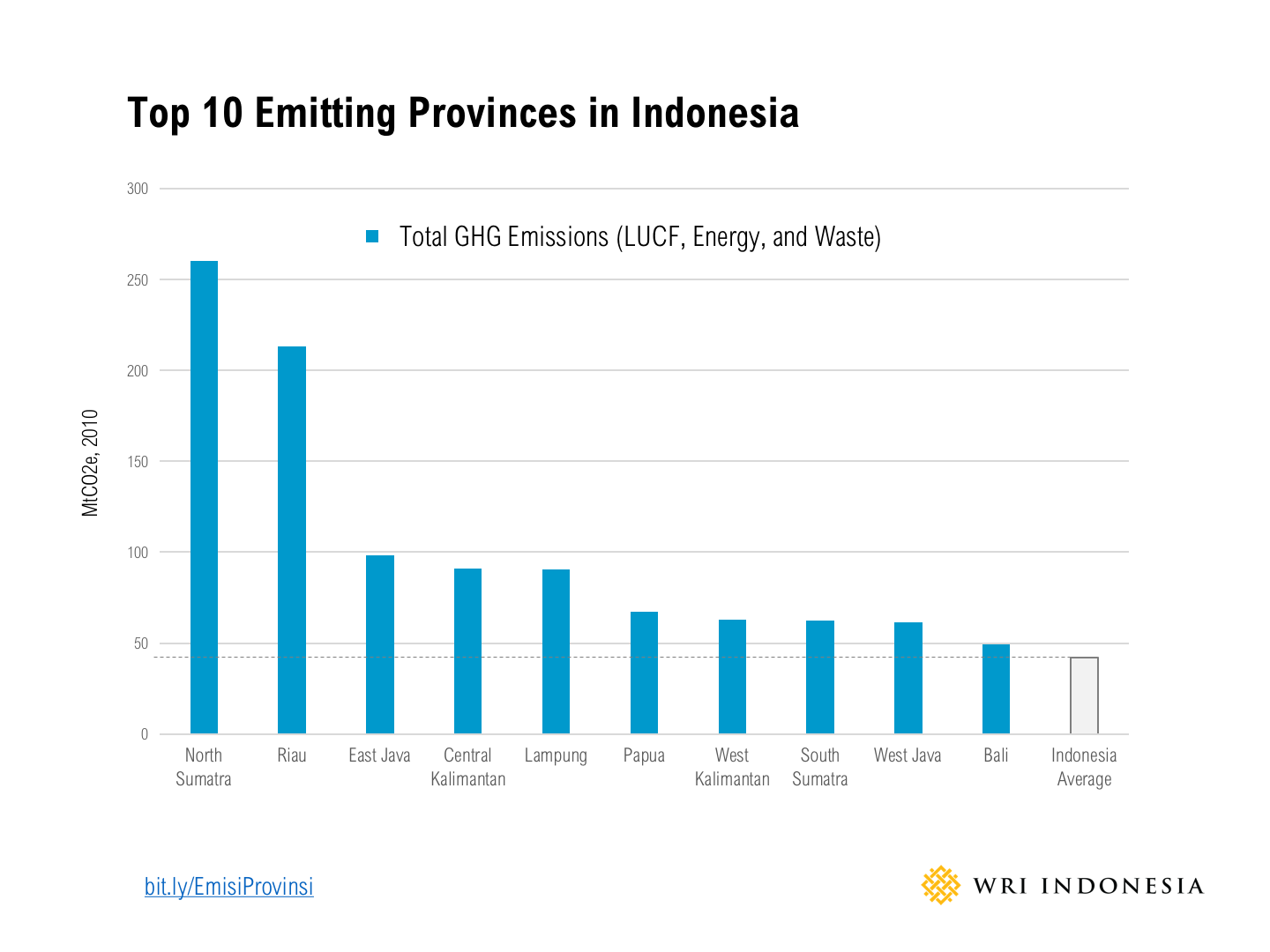 According to official data provided by the Indonesian government, North Sumatra surpassed all the other provinces as the highest-emitting province in 2010. This is likely due to the massive deforestation that has been taking place in North Sumatra’s Leuser Ecosystem for almost two decades, but particularly spiked during the 2008-2013 period. Riau, East Java, Central Kalimantan and Lampung immediately follow, with the primary source of emissions ranging from agriculture and forestry, energy, transportation, industry and waste.

However, Central Kalimantan quickly overtakes the list when you look at per capita emissions and emissions intensity, which is a measure of a province’s emissions based on population and provincial GDP. 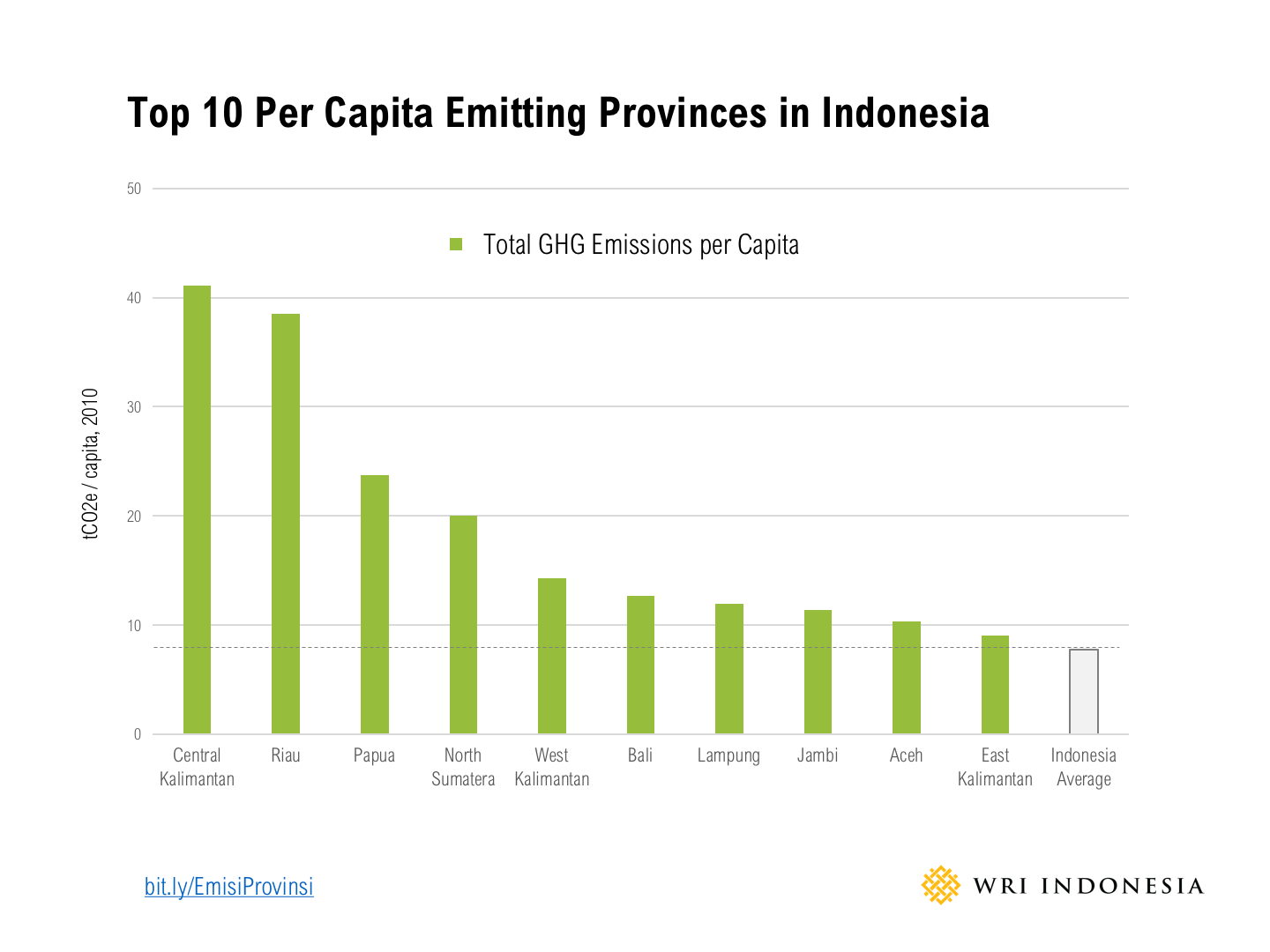 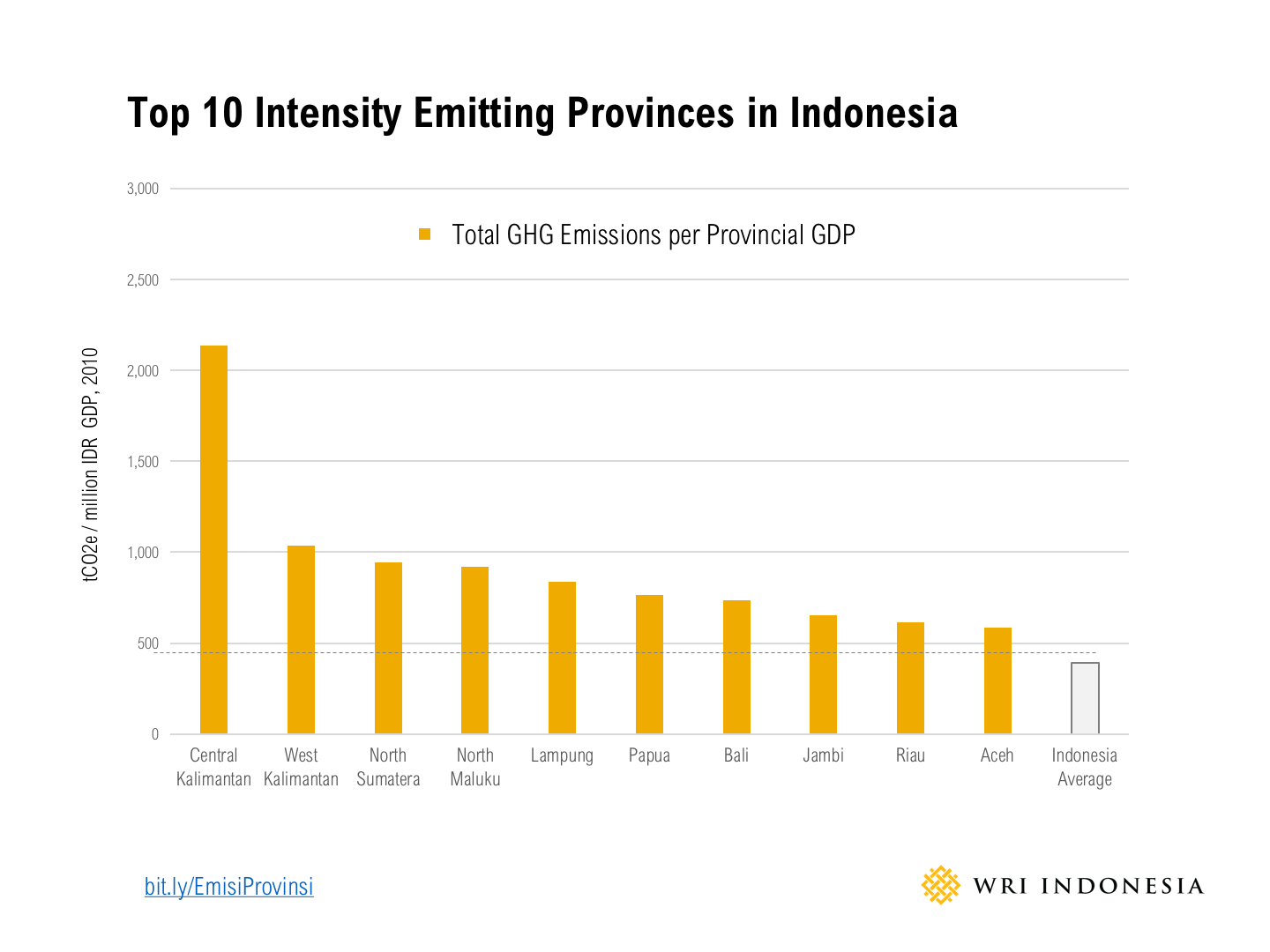 2. What are the sources of provinces’ emissions?

Each province in Indonesia has unique landforms and economic activities, so emissions sources differ by region. Most provinces’ emissions come from land use change and forestry (LUCF)—as does the nation’s overall emissions—but CAIT Indonesia shows that energy-based emissions dominate in at least 10 provinces, including East Java, West Java, Central Java, South Sulawesi, Banten, DI Yogyakarta, Riau Islands, North Sulawesi, Maluku and the capital province, DKI Jakarta. Understanding this can help local governments come up with the most efficient approaches to reducing emissions, as well as help non-state actors in supporting this process. 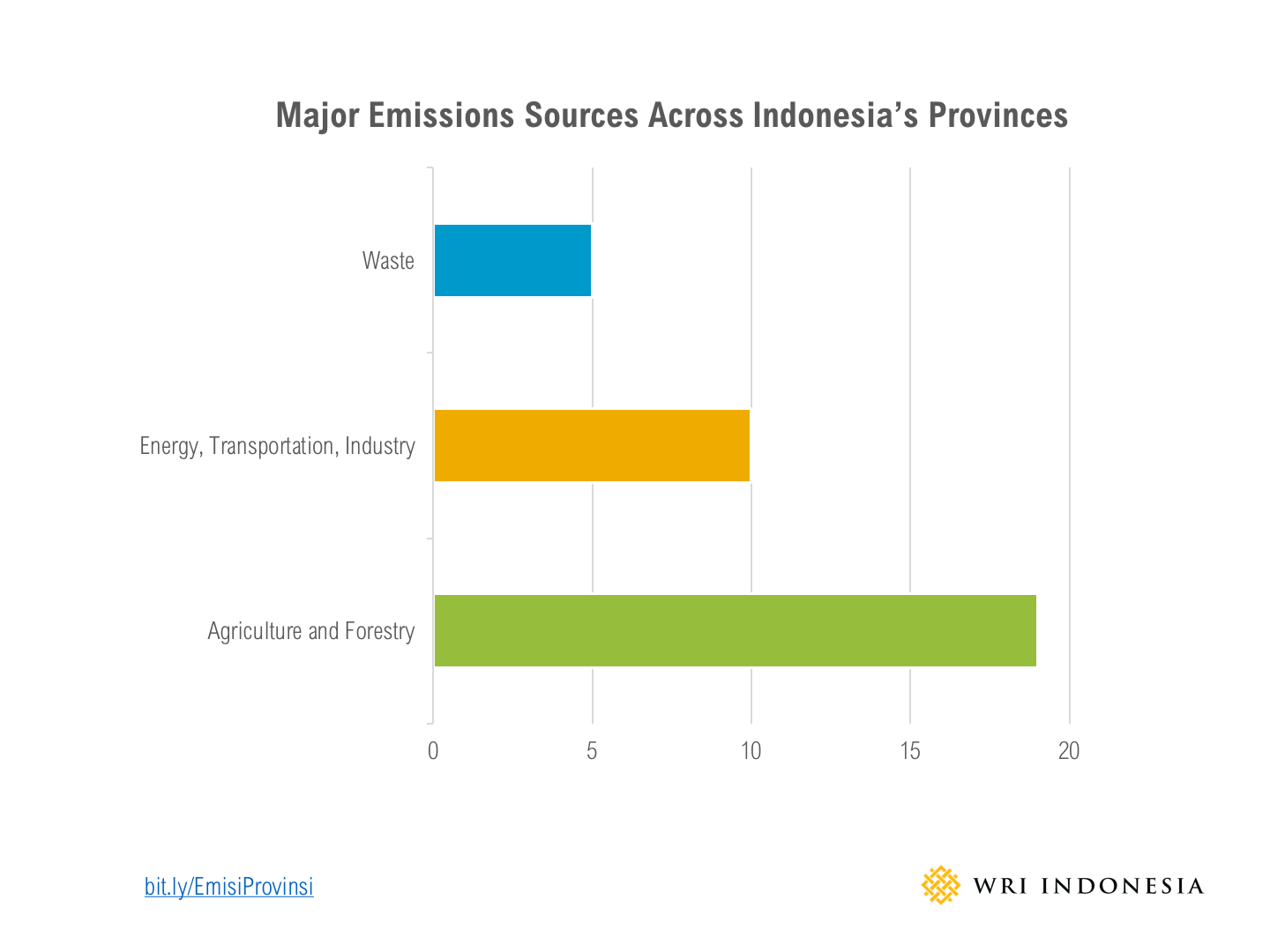 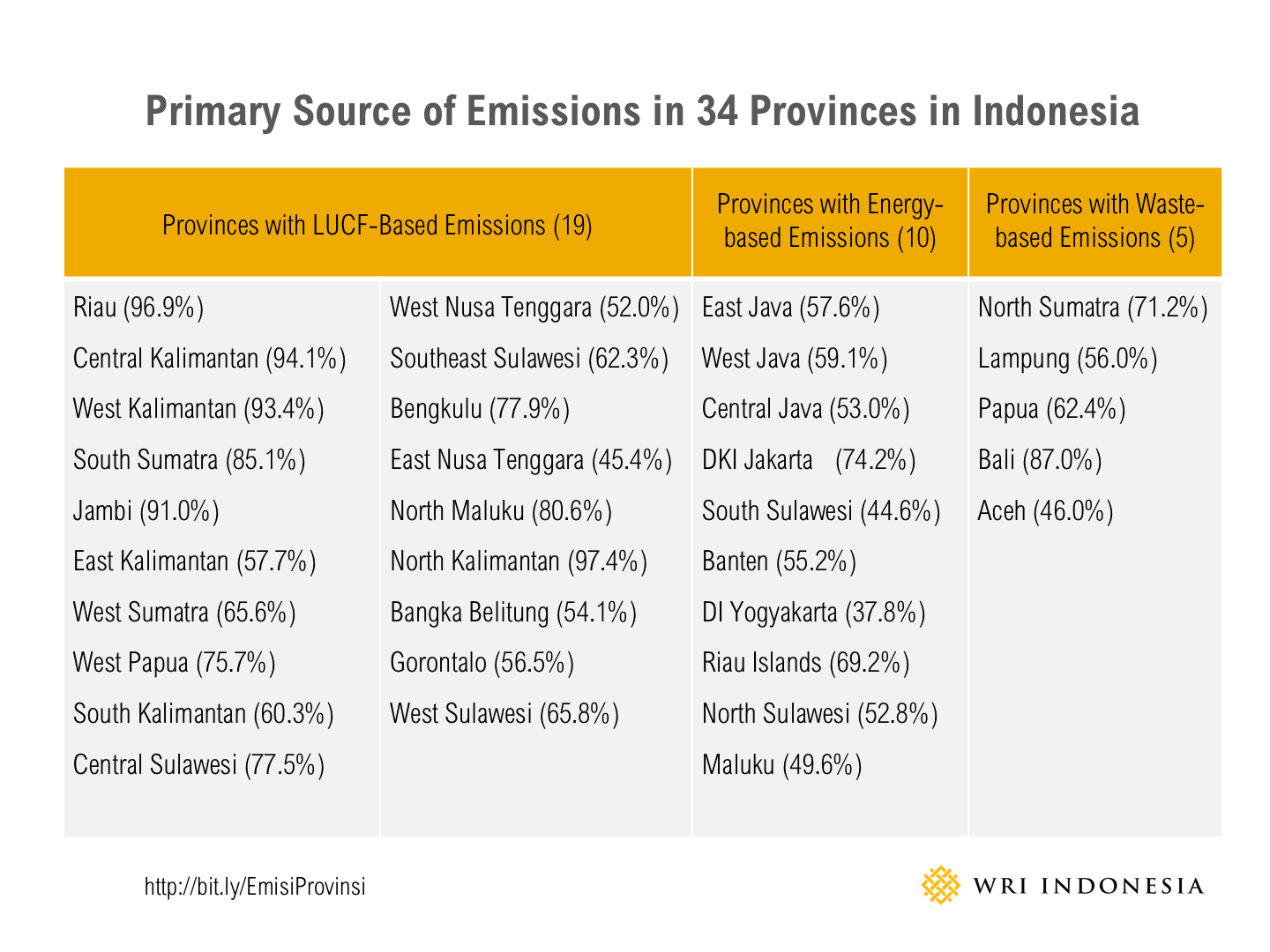 3. What are provinces doing to reduce their emissions?

CAIT Indonesia also provides summaries of mitigation activities included in each province’s RAD-GRK. For example, Aceh plans to restore degraded forest and peat lands, create a greenhouse gas inventory of forest and peat land resources, and prioritize law enforcement and management of use permits in forest and peat lands. Comparably, East Java puts forth a plan for energy conservation, renewable energy development, and an intelligent transportation system to reduce its emissions.

Creating a better understanding of provinces’ climate commitments is helpful for attracting the right supporters to make sure they achieve them. For example, knowing which of the provinces have renewable energy development as a priority will ideally attract clean energy projects from investors or civil society organizations.

4. What are provinces doing to adapt to climate change?

Out of 33 RAD GRKs, only eight provide an adaptation plan. As an archipelago with one of the vastest coastlines in the world and millions of people dependent on the agricultural economy, Indonesia is especially vulnerable to the adverse impacts of climate change, and should better integrate adaptation to its climate action. While Indonesia already has a National Action Plan on Adaptation (RAN-API), the country may need to start paying more attention into how this is implemented at the subnational level. 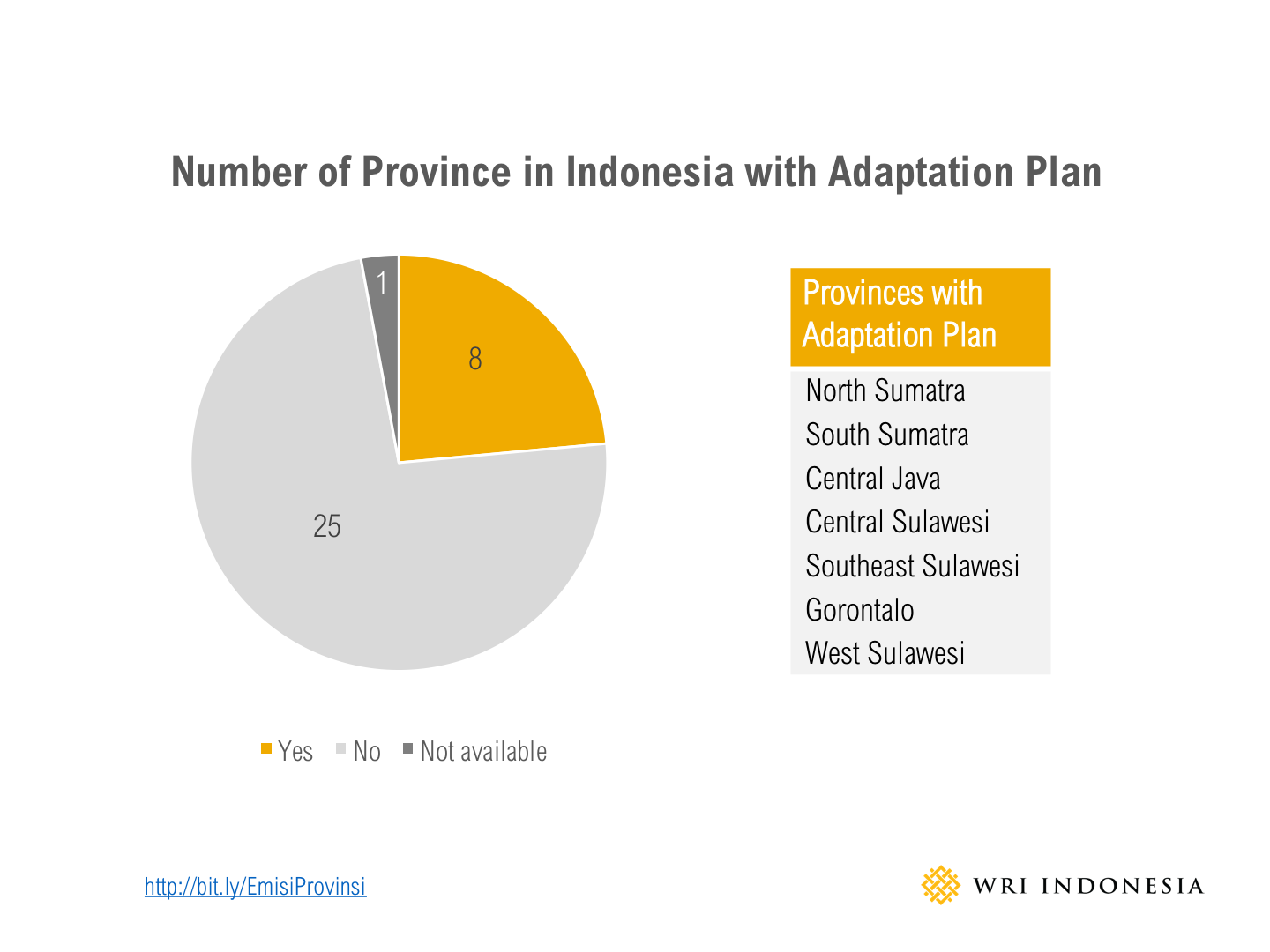 5. Are provincial climate commitments in line with their development goals?

As a developing country, it is pivotal for Indonesia to ensure that its climate commitments are in line with its development priorities. Yet CAIT Indonesia reveals some discrepancies between the two sets of goals.

For example, West Kalimantan’s development plan contains targets to “increase consumption of mineral resources,” while East Java’s aims to “increase exploration and exploitation to develop mining and mineral resources.” Both of these development priorities are contradictory to their proposed mitigation activities, such as “protecting remaining forests” and “reforestation.” The provinces will need to find a way to balance these seemingly competing goals.

6. How much progress has been made so far?

CAIT Indonesia will enable users to monitor annual reported progress as the data are made available, both at the provincial level and aggregated at the national level. By 2013, Indonesia has achieved 2.25 percent of its 2020 provincial emissions-reduction target. This signals that Indonesian provinces need to accelerate implementation if the country still wishes to be on track toward achieving the 2020 goal.

CAIT Indonesia is part of WRI’s CAIT Climate Data Explorer, a platform made up of a suite of tools containing comprehensive and comparable climate and emissions data. It aims to improve public awareness, understanding and the way people communicate climate data.