Land conflicts are rooted in structural land management problems that first occurred in the colonial era and have persisted today (Figure 1). Based on the preliminary findings in WRI Indonesia's ongoing research, the multistakeholder institutional model is an alternative for an effective and sustainable land conflict resolution. Multistakeholder institutions are based on collaborations between the government, civil society and the private sector for the achievement of a common goal.This would be the best approach for resolving land conflicts considering the extensive scope of issues related to land management. 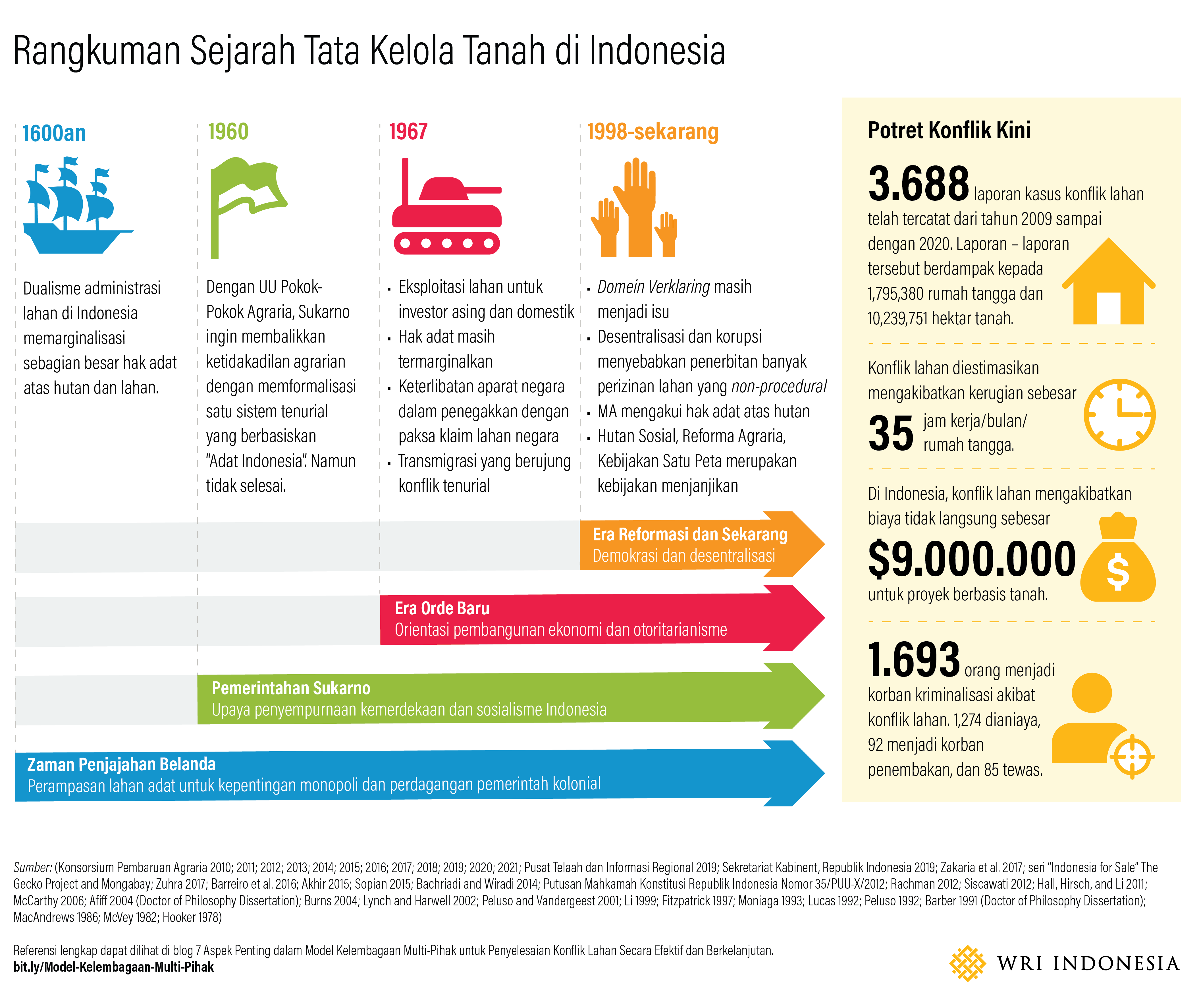 The government has made various efforts to resolve land conflicts through several policies, such as agrarian reform and social forestry. Based on the preliminary findings of WRI Indonesia's research, a multistakeholder institutional model may result in more effective programs and help overcome existing challenges. Here are seven key aspects that have been identified.

1. A standard of success that is incorporated into the mission of the institution

According to WRI Indonesia’s latest report, current conflict resolution is too administrative, ad-hoc and reactive. This approach generally still relies on formal mechanisms, focuses on short-term problems within a narrow scope and fails to address prevention. This approach gets in the way of land conflict resolution by institutions due to the structural problems that are difficult to address, such as inequality in natural resources access and poverty. The reason is that structural problems require a holistic approach to address. This needs to be addressed since the Agrarian Reform Consortium has found that the majority of land conflict cases in Indonesia is rooted in structural issues.

Thus, the ideal institutional model must have the mission of addressing the underlying structural issues of land conflicts, providing clear legal status of lands, reaching an agreement between stakeholders and transforming conflict into a collaborative relationship. Land status clarity can minimize and prevent conflict. Overlapping claims over lands have exacerbated the potential for conflict. In addition, a voluntary settlement may prevent future recurrence of a conflict. Voluntary settlement means that the community has the capability and knowledge to pursue the land conflict resolution option that works best for them. In this case, the institution has the responsibility to help empower the community to increase acceptance of resolution method by the stakeholders so that the conflict can be turned into collaboration.

Another latest report from WRI Indonesia also identified the issue of overly complex and scattered institutional framework as well as poor coordination. This hampers conflict resolutions that require cross-institutional involvement. Thus, to achieve the real mission or standard of success, the institutional model must employ a unified and coherent strategy that spans across ministries and government levels and works responsively to address situations that have the potential to escalate into a conflict. Such strategy coherence and unity are needed to allow conflict resolution institutions to run optimally, both at the policy level and implementation in the field. Strategy coherence and unity requires coordination between stakeholders as well as collaboration and communication among stakeholders. In other words, there needs to be a collaboration in land conflict resolution efforts, both in policy formulation and in the field. Finally, a proactive and preventive approach is need in the institutional model for conflict resolution. The end goal are complete resolution of conflicts and prevention of prolonged conflicts that are detrimental to the community.

The institutional model must have the four characteristics of being neutral, inclusive, having authority and having legitimacy from both state and non-state parties. Neutrality means that conflict resolution institutions are free from interests that may affect such conflict resolution. Institutional models also need to involve various stakeholders inclusively, including the government, civil society, the private sector and representatives of indigenous people. This involvement must extend beyond formal institutional position into efforts for good public participation. As important is authority. In this case, institutions must have the power and authority needed to resolve land conflicts, especially those that require inter-agency coordination and involve parties with political/capital power. In addition to these three aspects, legitimacy is another key characteristic. Legitimacy here is not just about formal legal legitimacy, but also the stakeholders’ acceptance of the resolution’s process and results.

The institutional model must employ an effective operational framework for coordinating the relevant institutions and stakeholders. This requires the support of operational guidelines and standards to synergize agencies that resolve land conflicts. This would also minimize institutional approach that focuses on their sector-specific problems. The operational framework also includes a clear standard operating procedure (SOP) for land conflict resolution that covers reporting stages, report filtering, conflict assessment and various conflict resolution processes in the field. The SOP preparation and implementation need to be top-down and bottom-up to represent and answer the problems faced in the field. Finally, good practices from other professional organizations, such as context-sensitive, cooperative and beneficiary-oriented practices, need to be adopted.

Accurate data and information systems are needed for adequate data sources in conflict resolution. This system must be able to summarize and accommodate data from various stakeholders, such as mapping by non-governmental organizations. All data collected will be further verified. The system must also provide public access in a transparent and accountable manner.

Institutions must have an effective monitoring and evaluation system for conflict resolution efforts by bureaucrats and related officials based on institutional achievement indicators or community reports. Such monitoring must result in an evaluation of the various programs and policies that have been carried out. To improve the performance of human resources, incentives and disincentive mechanisms are needed based on the results of this monitoring and evaluation.

6. Strong political power and will

This institutional model requires strong political support and commitment from high-level leaders, both at the national and regional levels. This political power and will should not rely on certain figures, but must be truly institutionalized into a system. This would make the system sustainable and prevent it from being significantly altered when a change in leadership occurs.

Conflict resolution must be able to empower the community. This can address the problem of inequality in land conflicts, considering that the community often assumes a weaker position. As a result, it is often difficult for the community to consolidate and negotiate their interests in a measurable manner. Community empowerment can involve various stakeholders, such as non-governmental organizations, especially those that are involved in the local community.

Sources of data in the “Historical Summary of Land Governance in Indonesia” figure:

5. “Indonesia for Sale” Series of The Gecko Project and Mongabay

11. Decision of the Constitutional Court of the Republic of Indonesia Number 35/PUU-X/2012