Home > Blog > Between Facts and Misconseption: 3 Things We Need to Know About Paludiculture

Following the 2015 forest and peatland fires that cost 221 trillion rupiah, the Indonesian government initiated a national program to restore 2 million hectares of degraded peatlands in coordination with the Peat Restoration Agency (BRG) that will end in 2020.

In peatland revegetation, the government, the private sector and research institutions often bring forth the concept and practice of paludiculture as a middle ground between the cultivation of plants with economic value for the community around the peatland and the conservation principles. However, what is paludiculture, really? Have we really understood this concept?

According to Wichtmann and Joosten (2007) in the article 'Paludiculture: Peat Formation and Renewable Resources from Rewetted Peat Lands' and Schäfer (2011) in 'Paludiculture for Biodiversity and Climate – Economics of Rewetted Peatlands', paludiculture is a swamp cultivation approach in temperate and cold regions, such as North America and northern Eurasia. Germany and Poland are success stories of paludiculture. Through paludiculture, degraded peatland can be rehabilitated while being utilized for economic activities. The paludiculture principles and approach are quite common and have great potential for development in Indonesia.

Misconception 1: All plants that thrive on peatlands are parts of paludiculture

Liberica coffee, cacao, coconut and rubber are not native to peat swamp and require the peatland to be drained/dried to thrive. Such species is usually planted alongside the construction of square dams with overflow to keep the water level low (40 cm below the peatland surface or more).

The principle of paludiculture is actually the cultivation of plants native to peat swamp on wet or wetted peatlands without drainage. This practice does not only provide economic benefits, but also produce biomass (the biological materials in plants) that will support peat formation in the long run.

Species that require drainage to grow will not survive on fully wetted peatlands. Therefore, plant cultivation with drainage cannot be classified as paludiculture let alone sustainable cultivation. It is merely ‘plant cultivation on peatland’. 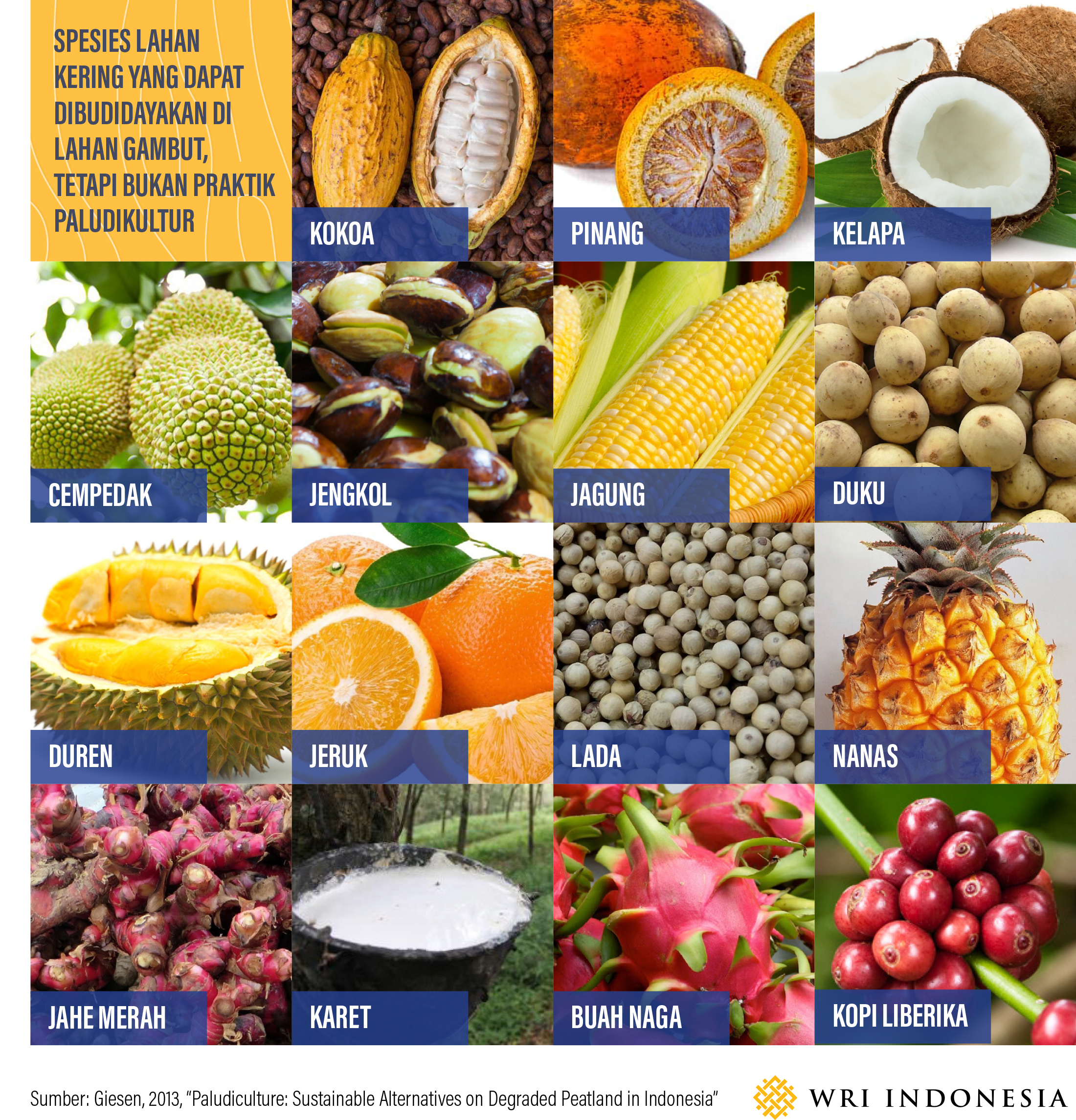 Misconception 2: Paludiculture can be implemented on dry peatland

Although some dryland species such as horticultural crops still grow on peatlands in some cultivation areas, dryland species cannot restore peat to its ideal condition in the long run due to oxidation (interaction between oxygen and other substances on peatland caused by the drop in groundwater level) and subsidence, resulting in the decline of the peatland quality. As a result, peatland continues to be at risk of fire and flood. Therefore, the cultivation of dryland species is not sustainable and is not recommended on ideal peatland hydrology or rewetted peatlands.

Align the meaning of paludiculture in Indonesia for better restoration planning

Correction of these misconceptions should encourage peat restoration actors to base their restoration plan on the latest scientific knowledge on native peat swamp plants that can also benefit the surrounding communities economically. The report 'Paludiculture: Sustainable Alternatives on Degraded Peatland in Indonesia' (Giesen, 2013) provides information on the 81 species of non-timber forest products (HHBK) that match the paludiculture criteria, classified into four categories. 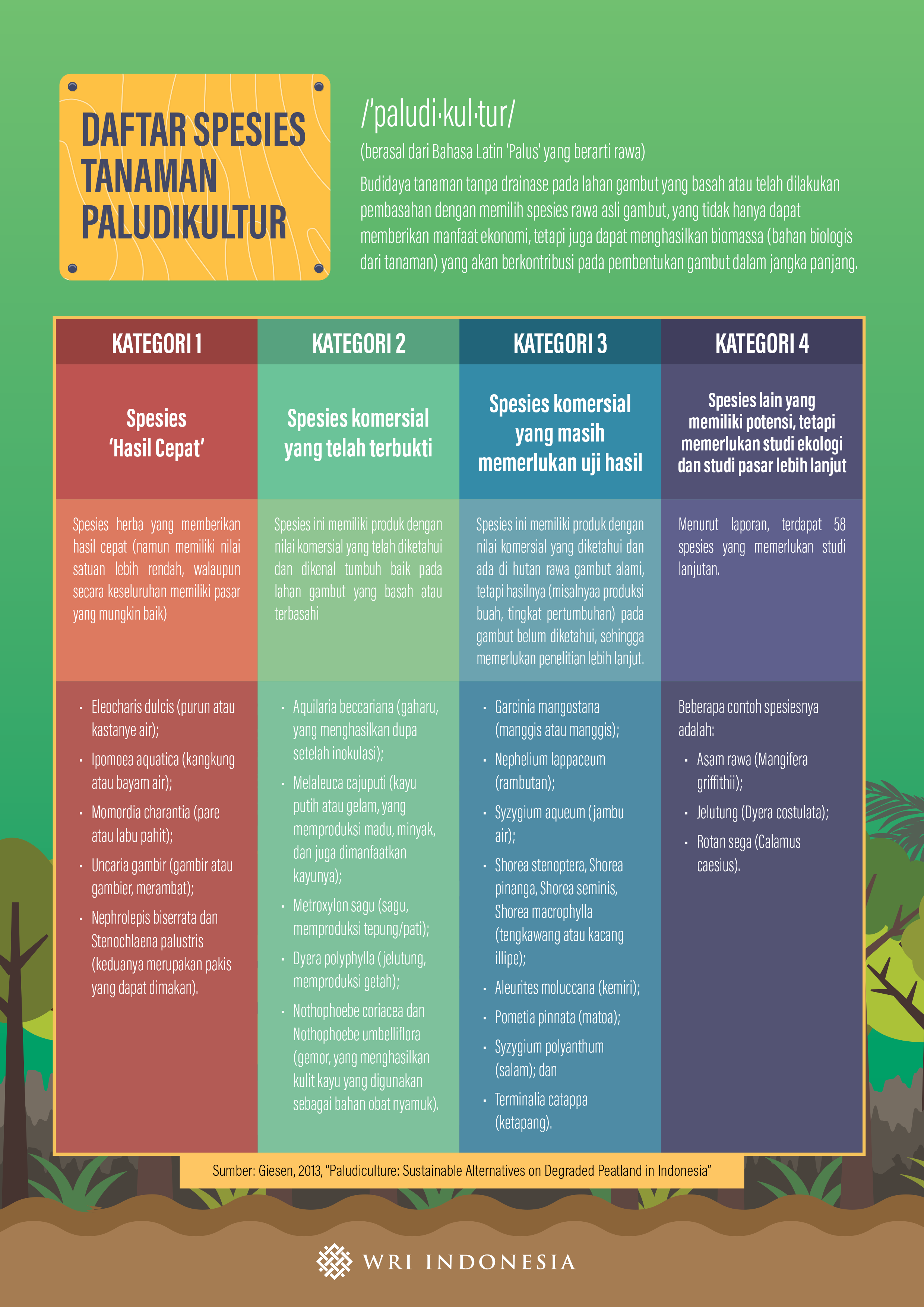