Countries agreed to limit global warming to well below 2 degrees C (3.6 degrees F) and ideally 1.5 degrees C (2.7 degrees F) as part of the 2015 Paris Agreement. The latest science shows that emissions will need to drop by half by 2030 and reach net-zero by mid-century to meet this goal and prevent the worst impacts of climate change.

A report from WRI and ClimateWorks Foundation found that in all but a couple of cases, progress is happening far too slowly for the world to meet its emissions-reduction targets – and in some cases, we’re moving in the entirely wrong direction. 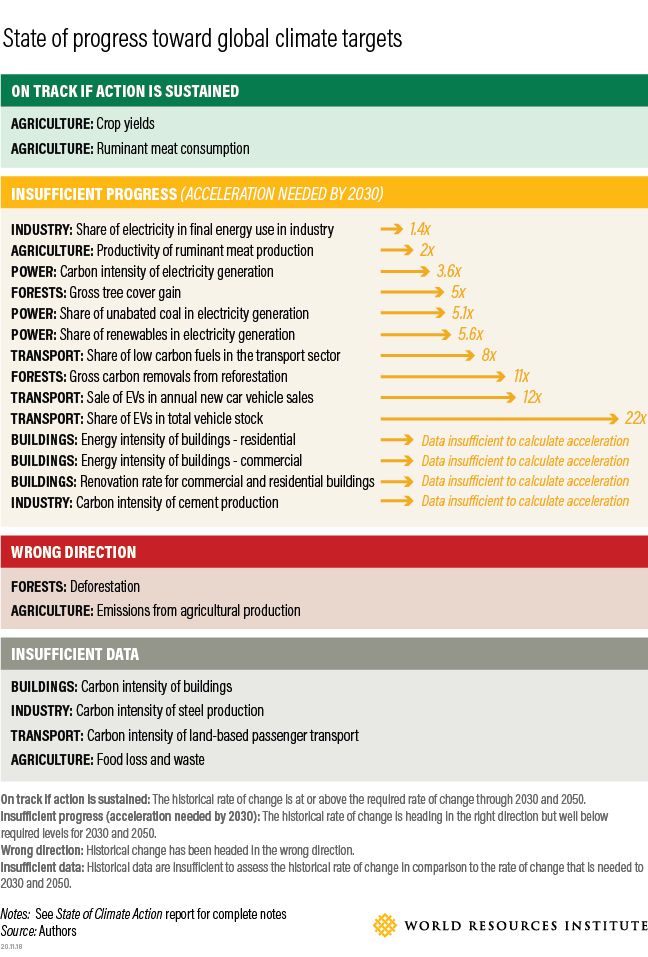 The Climate Action Tracker (CAT) consortium designed benchmarks for the power, industry, buildings and transport sectors, while WRI designed indicators for the forest and agricultural sectors. All benchmarks were informed by multiple lines of evidence to account for recent developments, assess feasibility and ensure compatibility with the Paris Agreement.

Here are some of the most significant mitigation opportunities across the power, buildings, industry, transport, forests and agriculture sectors that will be needed to meet global GHG emissions targets:

Renewable energy is now the generation technology of choice, making up 72% of new capacity in 2019. The rate at which it is being added globally has been increasing year over year, and its share of total electricity generation reached around 27% in 2019.

While there has been a tremendous acceleration in renewable energy, to meet 2030 and 2050 climate targets, the pace of change will still need to increase by a factor of five.

Each county’s pathway toward achieving these milestones differs depending on their starting point. For example, China and India are starting with higher shares of coal-fired power, at 67% and 74% in 2018. In other countries — Brazil, for example — the share of renewables in total electricity generation is already much higher than the global average, at more than 80% in 2018, due to abundant hydropower, but electricity demand is also expected to grow.

At the same time, existing coal-fired power plants need to shut down and no new ones should be built to avoid locking us into a carbon-intensive future. Globally, coal currently provides 38% of electricity, but by 2040, electricity from unabated coal needs to be phased out1.

Governments are increasingly recognizing the health and cost benefits of moving away from coal: Retirement of coal plants has increased — from 2 GW in 2006 to 34 GW in 2019 — but new coal plants continue to be built, largely in countries with increasing demand for electricity. 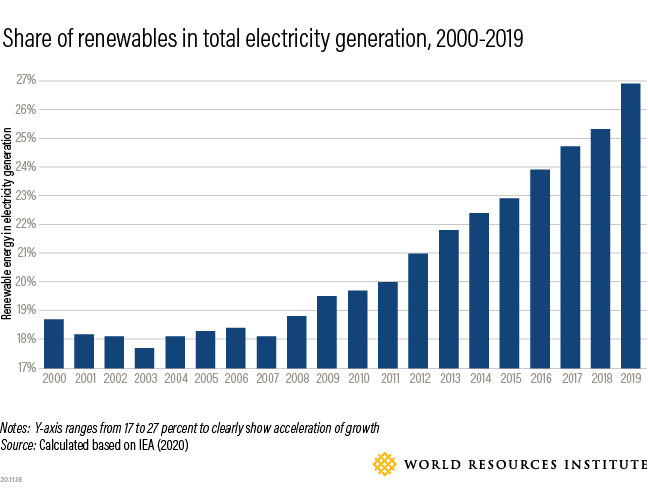 Globally, building operations (excluding manufacturing and construction) account for 30% of energy use and 27% of energy-related CO2 emissions. Existing buildings must be renovated to increase energy efficiency and improve carbon intensity, but the world is not doing so quickly enough. Current rates of renovation for both residential and commercial buildings fall between 1% and 2% per year on average; to achieve climate goals, they’ll need to reach 2.5-3.5% per year by 2030 and with much more significant energy-efficiency improvements.

Relatedly, the carbon and energy intensity of existing residential and commercial buildings have been gradually falling across major emitting economies, with a few exceptions. But this decline needs to happen much faster in most countries to be on track for a 1.5 degrees C (2.7 degrees F) future.

In addition to renovating existing buildings, all new buildings in all countries need to be of high energy-efficiency standards and equipped with heating and cooling technologies that either are or can be zero-emissions.

In many countries, much of the building stock that will exist in 2050 is yet to be built. These countries face the challenge of expanding building stock while also improving the energy and carbon intensity of existing buildings. Heat pumps, solar thermal water heaters and high thermal building standards are key to keeping energy demand and emissions low while providing comfortable living standards. 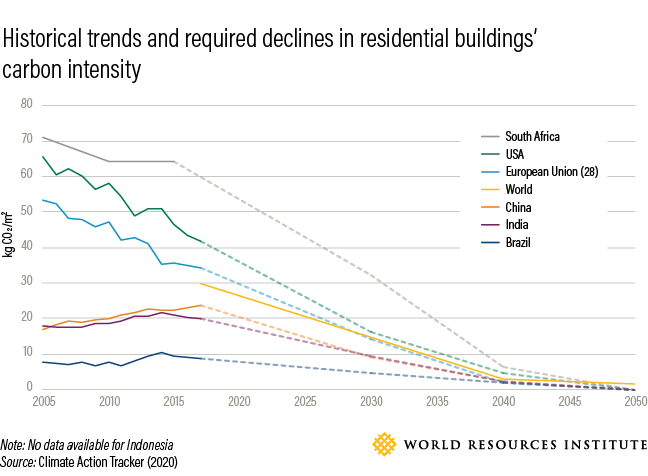 The global average carbon intensity of cement has remained flat over the past eight years, with some countries (like the United States) actually seeing increases in emissions intensity. CO2 emissions from steel production have been declining slightly over the same time frame in most major-emitting countries, but will need to rapidly decline if we are to meet climate targets.

A variety of options exist for the decarbonization of steel and cement production and they will need to be deployed together rapidly in the coming decades. Key options include increased recycling of scrap steel, switching to hydrogen for steel production, using alternative fuels in cement kilns and reducing the share of clinker in cement. Additional behavioral changes, such as reducing demand for these products, increasing the lifetime of buildings and other structures, and increasing the recycling and reuse of materials, can all help to further drive down emissions intensities. 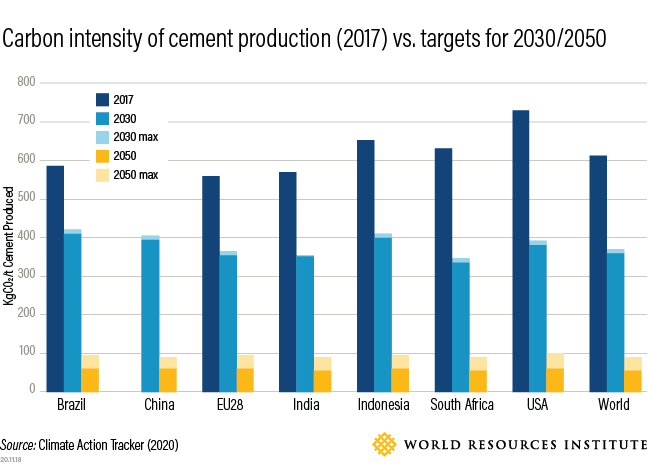 While there are a number of avenues to move toward more sustainable transport — like investing in public transport and making cities more walkable — replacing traditional internal combustion engine vehicles with electric vehicles (EVs) can reduce emissions from passenger vehicle transport, provided the grid powering them is also on a path to decarbonization. (Where this is not the case, low-carbon fuels must play a role.)

EVs currently make up a small percentage — roughly 1% — of the global passenger vehicle stock. But they’ve grown rapidly over the past five years and will likely accelerate further. This expansion is especially pronounced in countries with supportive policies, like China and Norway. In the latter, EVs made up 56% of new vehicles and 13% of the total vehicle stock in 2019.

As the cost of owning EVs gets more competitive with traditional vehicles and governments increasingly enact supportive policies, progress is moving in the right direction. However, if climate targets are to be met, the rate of recent EV sales globally will still need to accelerate by a factor of 12 for us to get to a fully electrified vehicle fleet and decarbonized transport sector. 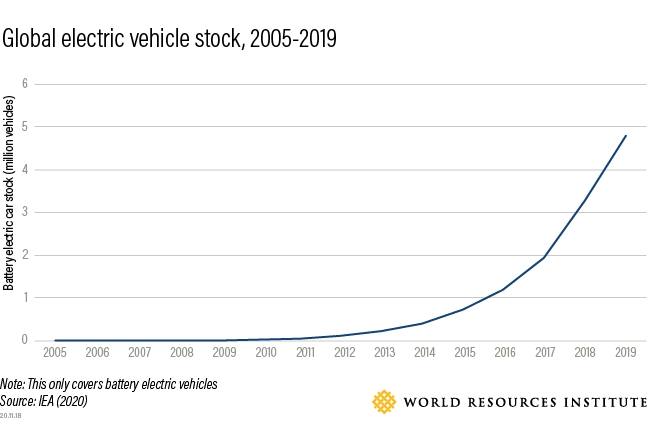 Deforestation has increased on average since 2001. Particularly concerning is loss of primary forests (see red bar below), which are irreplaceable in terms of biodiversity, ecosystem function and carbon sequestration.

While commitments to reduce supply chain deforestation have been increasing, they have not yet seen much success. Commitments to restore degraded landscapes are already nearly on track for the 2030 target (countries have committed to restore 349 million hectares2, compared to the 350 million hectares that need to be restored by 2030 to meet climate goals). But of course, countries will need to ensure that finance, incentives and politics align to turn commitments into concrete action. 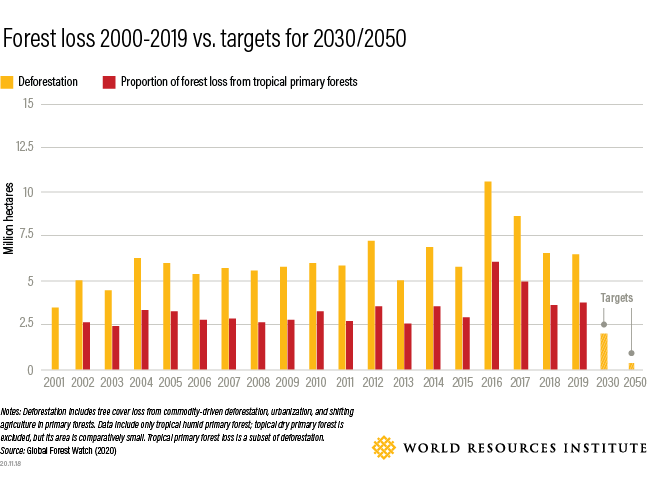 Improving land use efficiency is critical to meet the food demands of a growing population and achieve large-scale reductions in deforestation and increases in reforestation. At the same time, it will be essential to slow the rate of growth in food and agricultural land demand by reducing food loss and waste, shifting high-meat diets toward plants (and especially away from emissions-intensive beef and lamb), and avoiding further expansion of biofuel production.

Of the 21 indicators assessed in our analysis, the two that are on track to meet 2030 targets (if recent rates of action are sustained) are both in the agriculture sector: crop yield growth and ruminant meat consumption. However, while these two global-level indicators are on track if current action is sustained, there is high variability at country and regional levels that tells a more nuanced story.

For example, crop yield growth will need to accelerate more than 10-fold in sub-Saharan Africa to meet growing food demands without cropland expansion and loss of forests and savannas. And to meet the ruminant meat consumption target in an equitable way, the Americas and Europe would need to reduce their consumption 3 times faster than the rate over the past five years to provide room for low-income countries to modestly increase their consumption.

And one important overall indicator — total GHG emissions from agricultural production — is still moving in the wrong direction. 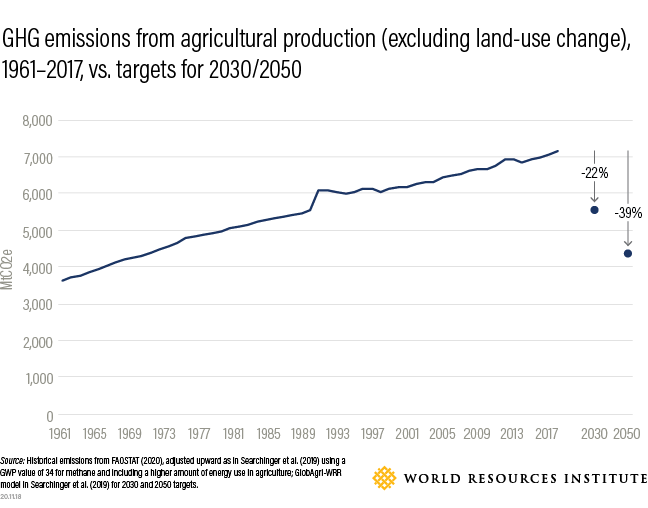 How Countries Can Secure a Low-carbon Future

Our current state of progress is significantly out of pace with the required transformations.

While this may seem daunting, it is achievable. The technological advances we’ve seen with cars, phones and computers once seemed impossible, too. A rapid transition to a zero-carbon future offers the same opportunity – but only if properly nurtured with the right policy, incentives, finance and other support.

Ahead of the UN Climate Change Conference (COP26) negotiations in Glasgow next year, countries should submit stronger national climate commitments under the Paris Agreement and develop long-term, low-emissions development strategies across all sectors. Depending on how ambitious they are, national climate plans could lock us into a carbon-intensive trajectory or accelerate us toward a safer, prosperous and more equitable future.

In addition, the rapid transformation needed will require significant financial investments, technology transfer and capacity building for developing countries. While climate finance has increased significantly in recent years, it is not at the scale needed to revolutionize our energy and transportation systems, accelerate energy efficiency and protect forests. Estimates indicate that we’ll need between $1.6 trillion and $3.8 trillion per year through 2050 for the energy transformation alone. In addition, changes put in place to realize a zero-carbon future will need to be done so in a way that they are durable and in a manner that is just, equitable and ensures prosperity for all.

As the State of Climate Action report details, options exist in all sectors to align GHG emissions trajectories with what the science says is necessary to avoid the worst effects of climate change. Now, it’s up to countries, businesses and others to put in place policies, incentives and financial investments to get us on the right track.

For corporations
For individuals