This article was originally published on www.theconversation.com.

On 6-17 November, Indonesian Government representatives are participating in Conference of the Parties 23 (COP23), an annual conference attended by representatives of 197 member states of the United Nations Framework Convention on Climate Change (UNFCCC). Presided by Fiji, this conference is held in Bonn, Germany.

One of the issues to highlight is climate change adaptation and its implications on environmental loss and damage in countries vulnerable to climate change impact.

As the world’s fifth largest GHG-emitting country, Indonesia has finalized its Nationally Determined Contribution (NDC) and is committed to reducing its emission by 29% independently and by 41% with international support by 2030. However, what does the commitment mean for Indonesia and the world?

Although various measures have been taken, our new study shows that Indonesia has to strengthen its current policy if it were to achieve the climate target. The potential emission cut from the enforcement of existing national policy in the land and energy sector, including forest and peatland concession permit moratorium, peatland restoration, renewable energy mix target, social forestry, and degraded forest rehabilitation, is not enough to meet Indonesia’s climate commitment.

Quantitative analysis shows that the effort has reduced CO2 emission to around 2.3 Gigatons (Gt), still below the national target of a maximum emission level of 2 Gt by 2030. This is a good starting point, but improvements must be made for more significant emission cut.

The implications of Indonesia’s climate commitment

According to the NDC document, Indonesia is projected to emit 2.8 Gt of carbon dioxide equivalent (CO2e) by 2030 unless mitigation efforts are made. This number is approximately equal to emission from the annual energy use of 300 million households.

Indonesia intends to unconditionally cut its emission by 29% of the projected 2.8-GtCO­2e emission by 2030. The cut is measured in carbon dioxide equivalent since it does not only include carbon dioxide, but also other GHGs such as methane and nitrogen dioxide, which are mostly generated from industrial and animal farming waste.

Indonesia’s NDC makes it clear that the 29% cut will come from several sectors, i.e. land (17%), energy (11%) and waste, industry and agriculture (<1%). To date, land and energy sectors contribute more than 80% of the country’s total emission. 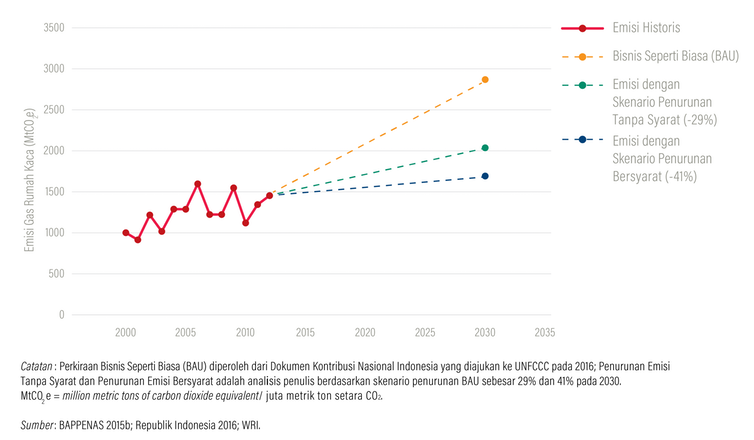 Indonesia’s Target Compared to Other Countries’

Unlike Indonesia, developed countries such as European Union (EU) countries mostly use ‘base year’ as the indicator of their emission target. It means that the level of their GHG emission cut is compared to emission in previous years. Germany, for instance, aims to reduce 55% of its 1990’s emissions by 2030.

Developing countries use economic indicators - such as GDP - in their climate target, as they require space for economic development, including for covering the basic needs of the population. However, they promise to find measures that will allow for low carbon economic growth.

As in China and India, Indonesia’s population and development continue to grow. However, the baseline indicator used by Indonesia does not include any development indicator, such as GDP. As such, it is limited to the reduction of absolute GHG emissions. With such limited indicator (emission cut only), climate change in Indonesia is often considered a sectoral issue that only environmentalists can grasp with the ability to calculate emission cut. In fact, emission is generated in all economic sectors, such as transportation, industry, electricity, building, household, food and others.

What has Indonesia done?

Even more so if this policy is implemented properly and extended through 2030. In addition, the moratorium policy could potentially prevent the emission of 427 million metric tons of CO2 to the atmosphere by 2030 if it is extended to secondary forests and concession forest areas. To achieve its national climate targets, Indonesia needs to start considering more ambitious climate change mitigation policies while pushing for the implementation of the existing policies.

A successful climate strategy in Indonesia requires government transparency and good governance. In addition, the awareness that climate change is a cross-sectoral issue is also needed for better vertical and horizontal collaboration, not only between government institutions but also with entrepreneurs and the people.

An alternative to achieve those requirements is to translate the climate change targets into development targets and economic outputs (i.e. GDP) and to communicate the benefits beyond emission cut.

Ultimately, tangible progress will only be made with approaches that prioritize the commitment to take action, the institutionalization of climate change mitigation efforts at the national and local level as well as the establishment of concrete collaboration to expand such efforts. Such measures will place Indonesia as a leader in the development of sustainable economy.