In early March 2014, forest and peat fires in Indonesia’s Riau province, on the island of Sumatra, spiked to levels not seen since the previous Southeast Asian haze crisis of June 2013. Nearly 50,000 Indonesians are suffering respiratory ailments due to the haze, according to Indonesia’s Disaster Management Agency. Dramatic satellite images of heavy smoke plumes show the large amount of pollutants being discharged to the atmosphere. The fires are extensive in areas with deep peat soils, suggesting high volumes of carbon are being released, contributing to climate change.

Global Forest Watch, a new online system that tracks tree cover change and fires in near-real time, reported last week and in an ongoing series that clearing land for agriculture is the major direct cause of the fires. As before, roughly half of the fires are burning on land managed by pulpwood, palm oil, and logging companies. Global Forest Watch shows that some of the largest fires are on fully developed plantations, despite the fact that many of these companies are committed to eliminating fire in their management practices.

The persistence of the fires—and the intensity with which they have returned—raises important questions. Below, we use new data from Global Forest Watch to explore these questions further.

1. How Many Fires Are Burning Compared with June 2013?

From February 20 through March 11, Global Forest Watch detected 3,101 “high confidence” fire alerts on the island of Sumatra using NASA’s Active Fire Data. That exceeds the 2,643 high-confidence fire alerts detected from June 13 – June 30, at the peak of the previous fires and haze crisis. 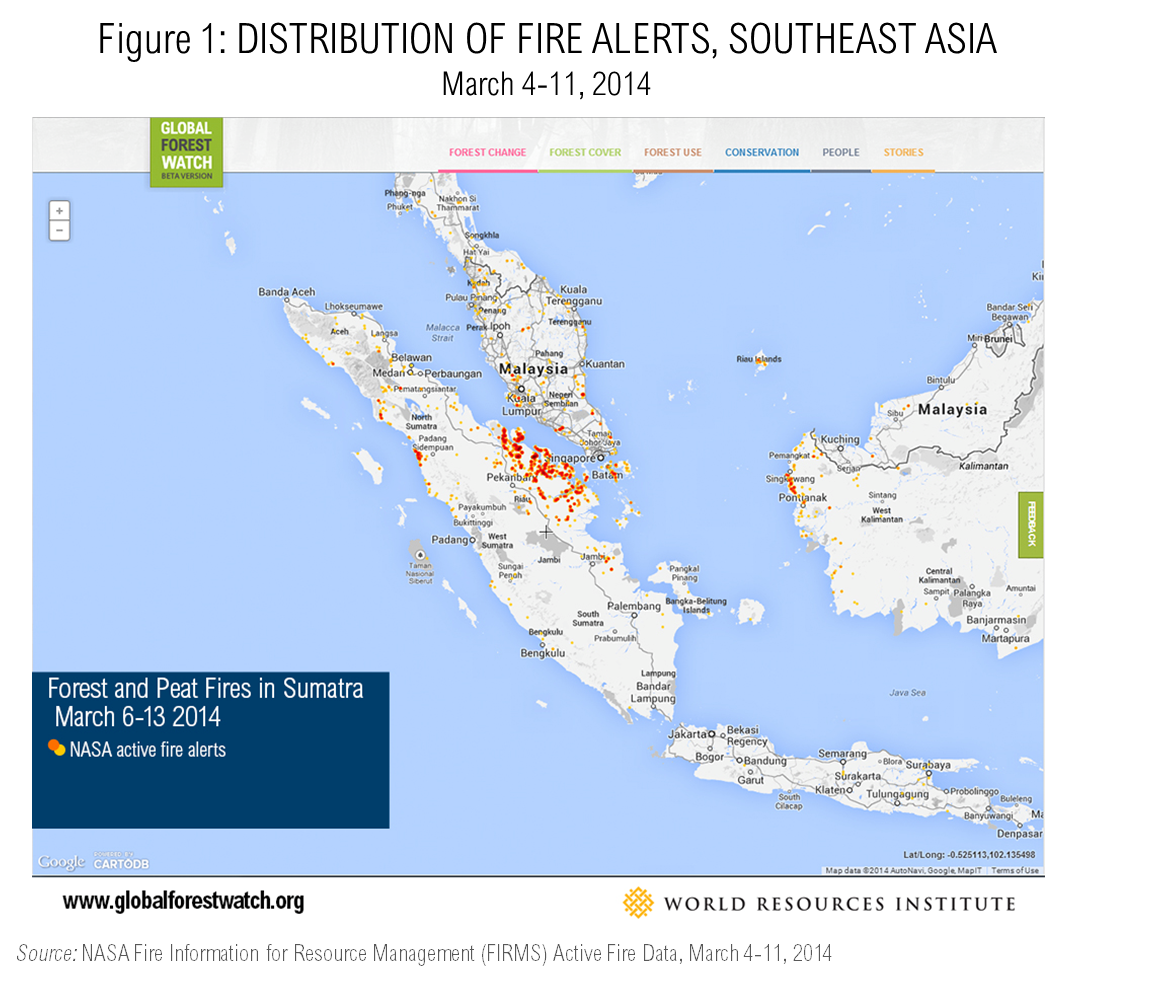 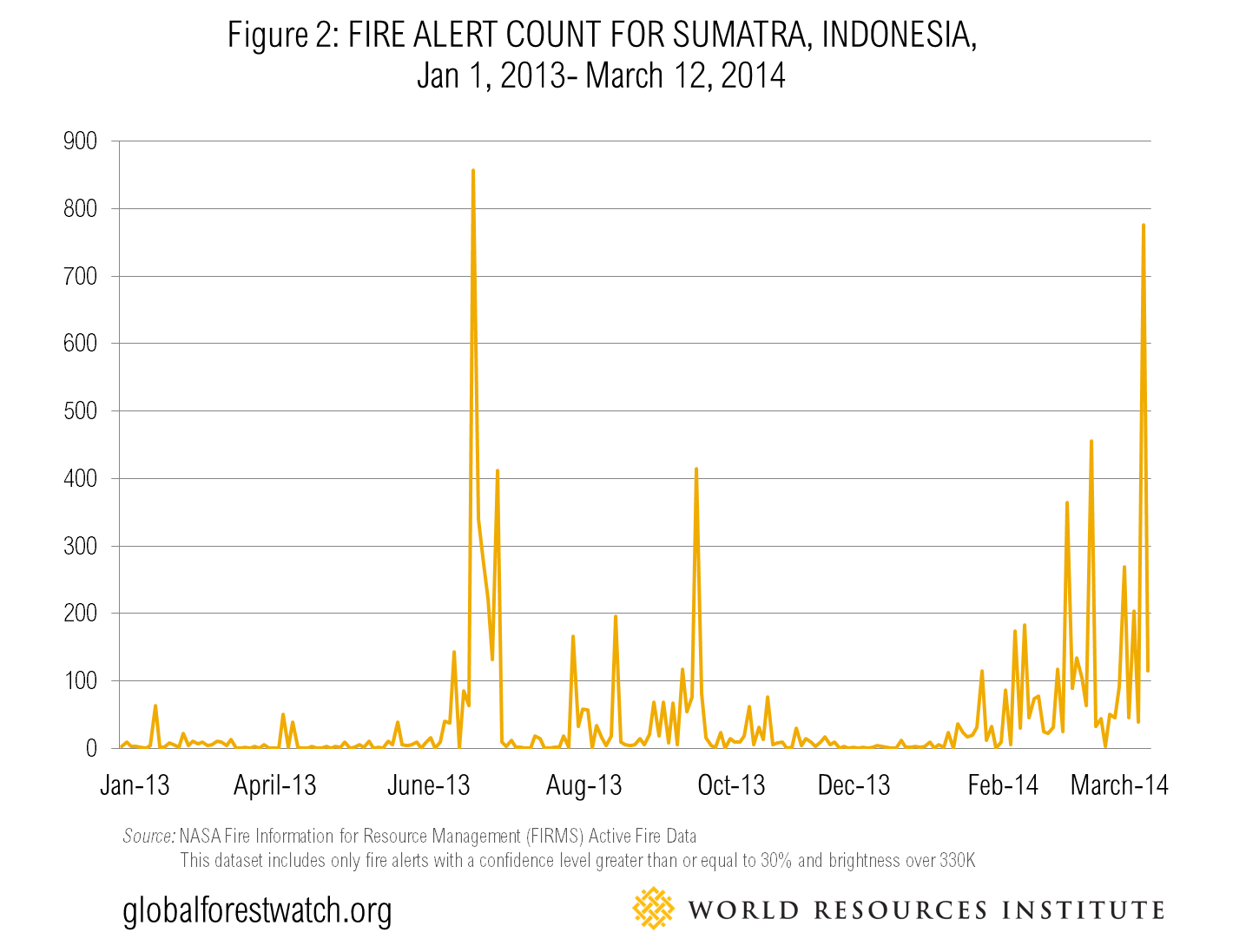 The fact that the fires are now even more prevalent than in June 2013 is of great concern, especially given the steps that Indonesian and other governments have taken to try and contain the problem since then. Plus, these fires are burning at an unusual time—almost no fires were seen in Indonesia during the same period in 2013. This latest crisis is clearly linked to the extreme drought now affecting the region, which makes burning easier and increases the likelihood that fires will burn out of control.

Interestingly, media coverage of the recent fires has been less than June 2013 due to the fact that wind patterns have directed the smoke and haze away from urban centers like Singapore and towards more rural areas in Sumatra.

As in June 2013, the majority of the fire alerts are concentrated in the Indonesian province of Riau, on the island of Sumatra. A remarkable 87 percent of the fire alerts across Sumatra for March 4-11 are in Riau Province. See the animation below showing areas of highest fires density within Riau over the last twelve days, as well as graphics on where fires occur in concession areas (Figures 3, 4 and 5).

Furthermore, roughly half of the fire alerts in Sumatra fall within land managed by palm oil, pulpwood, and logging concessions, according to data from the Indonesian Ministry of Forestry (Figure 4). Additionally, some of the largest fires appear to be burning across the concessions of several major companies (Figure 5). 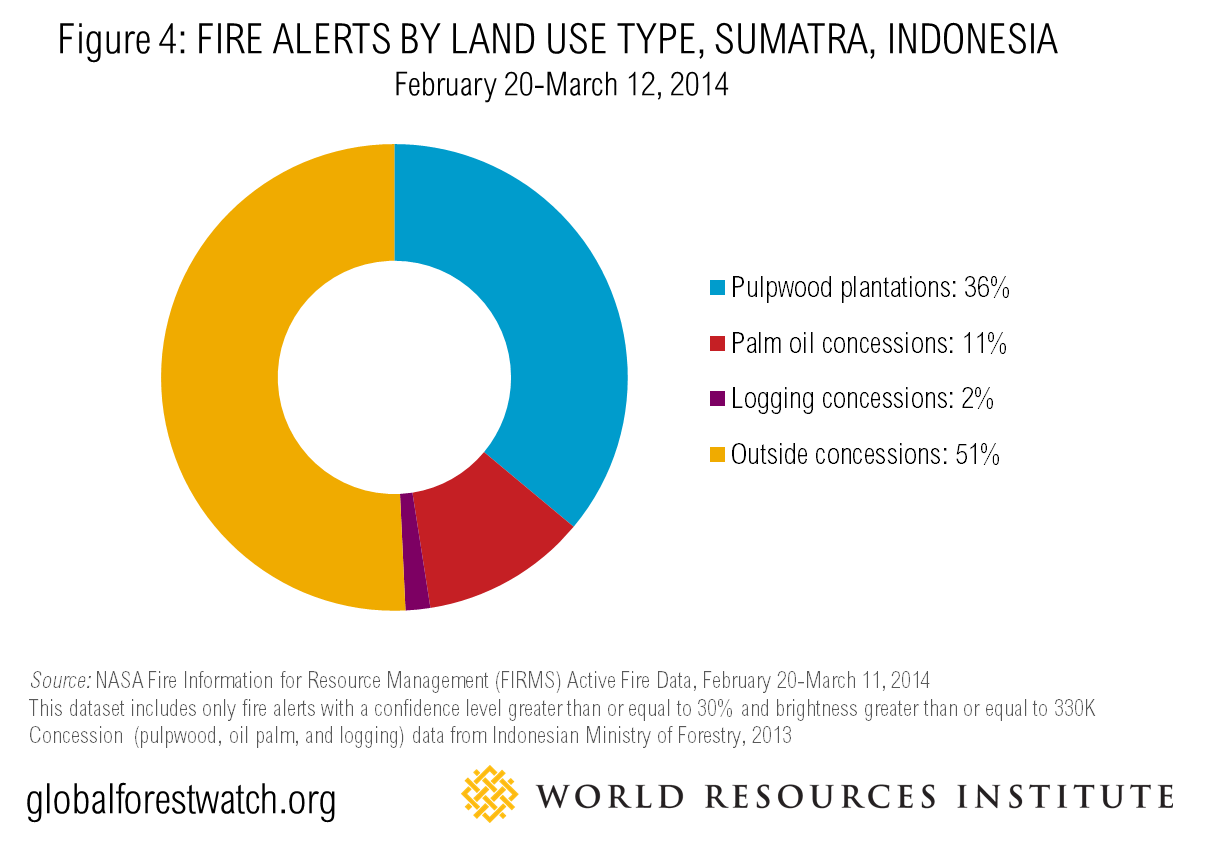 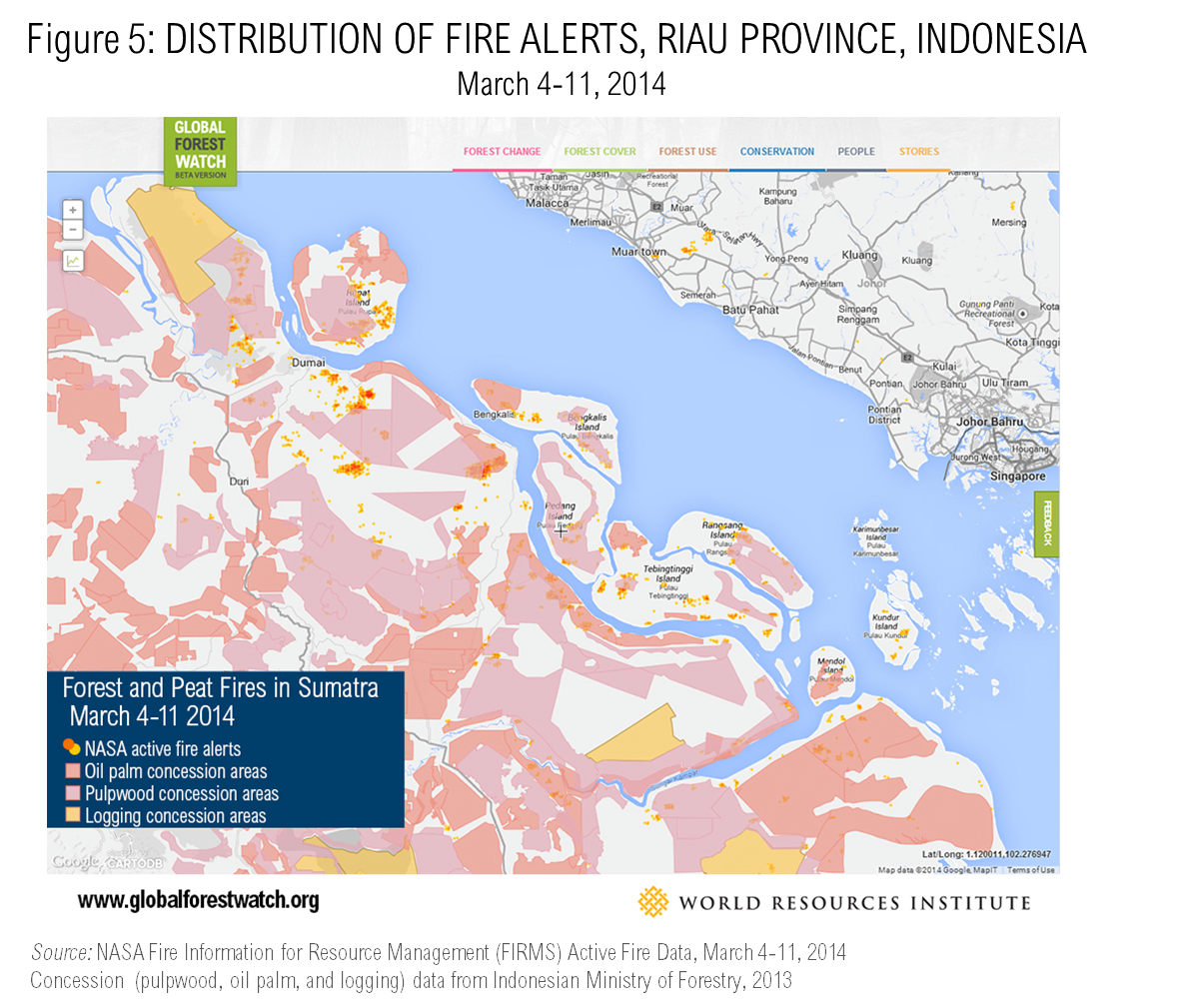 A list of companies operating on the affected areas is available at the end of this post. Closer investigation by Indonesian authorities on the ground is needed before drawing definitive conclusions about whether any companies have broken laws regulating the use of burning.

3. Why Does the Fires Problem Persist?

This week’s crisis is just the latest in a long line of fires episodes impacting Indonesia and surrounding countries. But while we can determine the extent of the fires and where they are happening, there’s still a lot we don’t know.

For one, Indonesia’s government fails to release the most timely, updated information on where oil palm, pulpwood, and logging companies are operating. While Global Forest Watch contains the latest available concession data, there are information gaps and issues with the accuracy of these maps.

Sharing of the latest concession boundaries and land ownership could foster better coordination between government agencies trying to tackle the fires, improved enforcement across the region, and ultimately, greater accountability for companies and relevant government agencies.

Second, further investigation on the ground is an urgent priority, including in-depth research and surveying to better understand the proportion of burning done by large companies versus medium-sized operations or smallholders. Certainly, poor farmers lack alternatives to the use of fire when clearing their land. They may also use fire to deliberately damage or claim land controlled by larger companies. Such land conflict is common across Indonesia. Governments, as well as independent research organizations, need quickly to invest more to understand the causes of the fires and better design programs for fire prevention.

That said, progress is being made. The governments of Indonesia and Singapore, as well as the wider ASEAN grouping, are taking efforts to reduce the risk of fires. Fire detection and combat efforts have been stepped up, and Indonesian law enforcement has made a significant number of arrests. Singapore is even proposing a path-breaking new law that would allow it to levy fines on companies—foreign or domestic—that cause transboundary haze that impacts the country. Governments of the ASEAN community agreed in October to collaborate and share data on fires and land use, though unfortunately this information will not be made public. And further, many companies have publicly announced “no burn” policies, and are investing in their own fire monitoring and control systems.

But as the unprecedented number of fire alerts in Indonesia shows us, these efforts are falling far short of what’s needed to curb the crisis. The fate of Indonesia’s forests, regional air quality and public health—and the people and wildlife who rely on those forests—depends on better law enforcement, more transparent information, improved coordination between government agencies, and enhanced corporate responsibility.

A list of companies operating on the affected areas is available below (Figure 6). 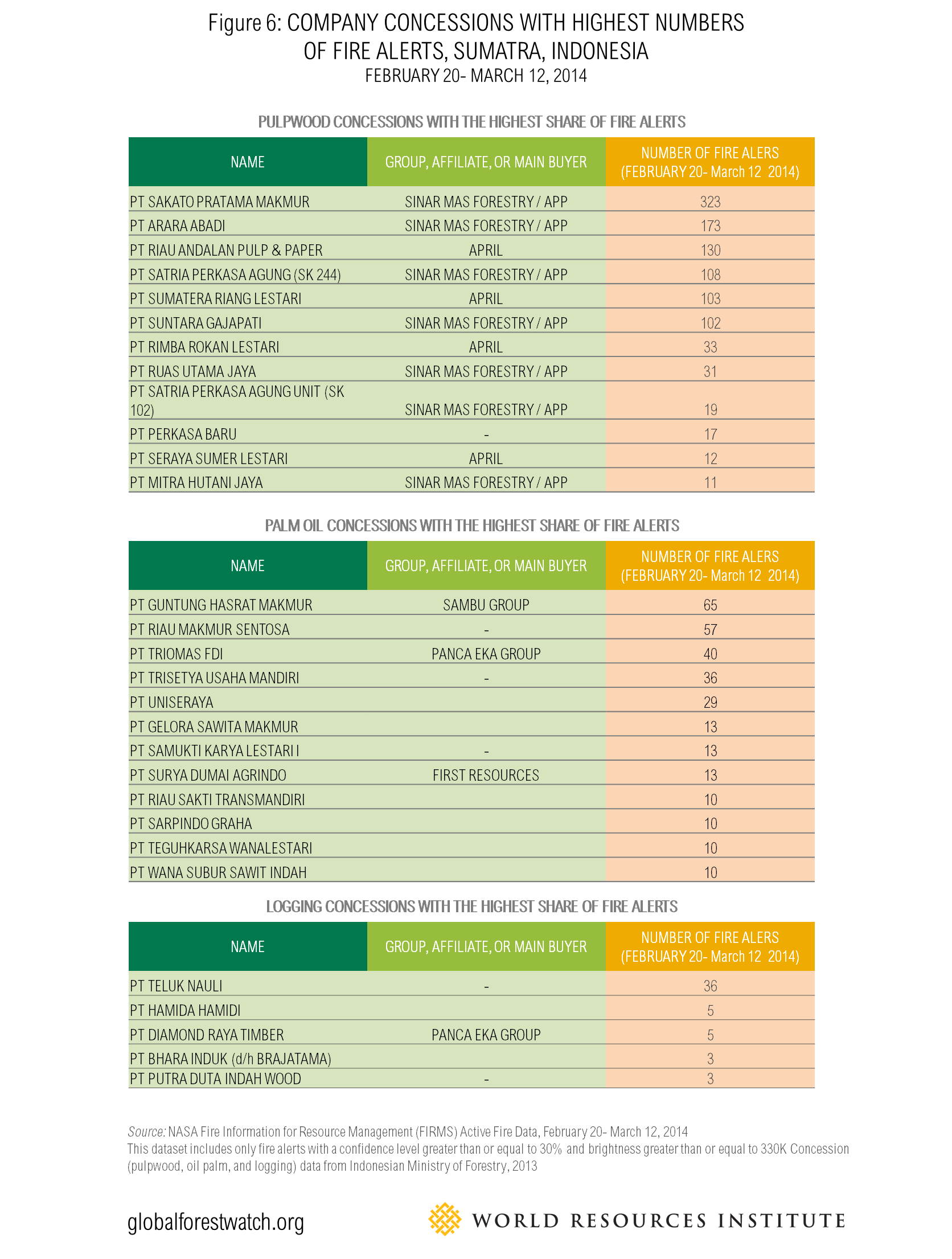