In 2019, the world lost 3.8 million hectares of tropical humid primary forest, or the equivalent of losing a football pitch of forest every six seconds for the entire year. The data was released by the University of Maryland (UMD) and published on the Global Forest Watch.

Since its launch in 2014, GFW’s main mission has been to promote the transparency of data and scientific information on the world’s forests in order to preserve them and stop deforestation. Understanding that each country has different methods and definitions, GFW adopts methods and definitions that allow users to calculate and compare tree cover loss and forest cover loss across multiple countries in the world.

Therefore, the method and definition used are universal, and based on scientific research principles. GFW used data and methods based on research by the UMD. Independent and open data platforms such as GFW and Forest Atlas serve to complement the various data currently available. The transparency of data and information has paved the way for stakeholders from governments, private sector, and the general public to engage in discussions and generate better information, which in turn is expected to help inform better forest management policies.

In principle, each scientific research in forestry may develop its own definition of what constitutes a forest and subsequently apply different methods for calculating deforestation. Each method certainly has its advantages and disadvantages, such as in terms of defining forest types, deforestation, mapping units, monitoring periods, and so on. Furthermore, different methods produce different results. These different methodologies are common in academic discussions, and they continue to create space for discussions and enable continuous improvement of methods.

How does the University of Maryland produce this data? And how is this data different compared to other data sources? These questions are explored in this post.

Definition of Primary Forest from UMD

For intact primary forests, Turubanova et al. (2018) defines it as large, contiguous blocks of primary forest showing no human activity, having a minimum area of 50,000 hectares.

For non-intact forests, the paper defined it as smaller primary forest fragments and primary forests closer to and within zones of human activity and disturbance. The fragments – due to disturbances such as road networks, intensive logging and fire – are detected at a 30 m spatial resolution (0.09 ha). 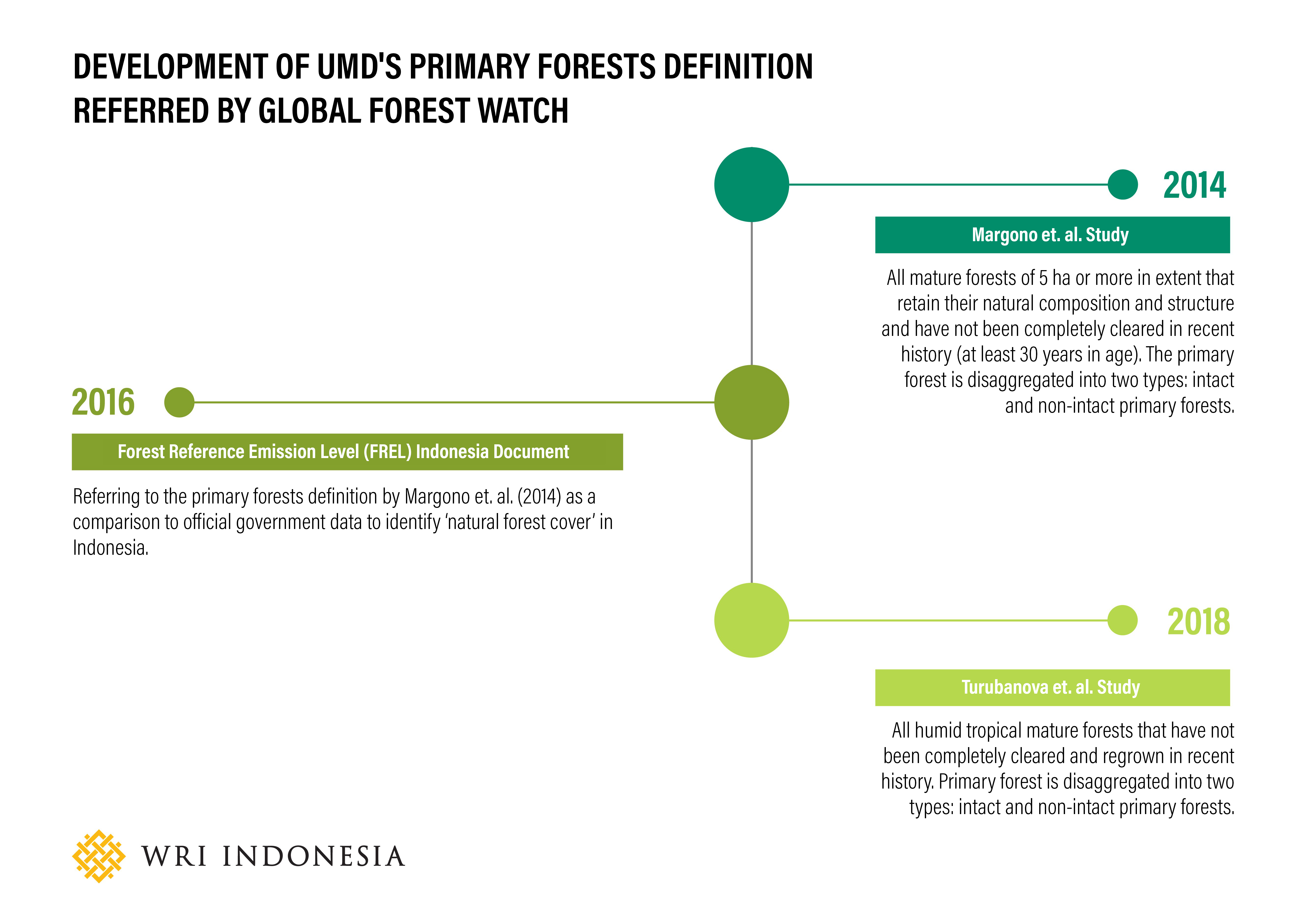 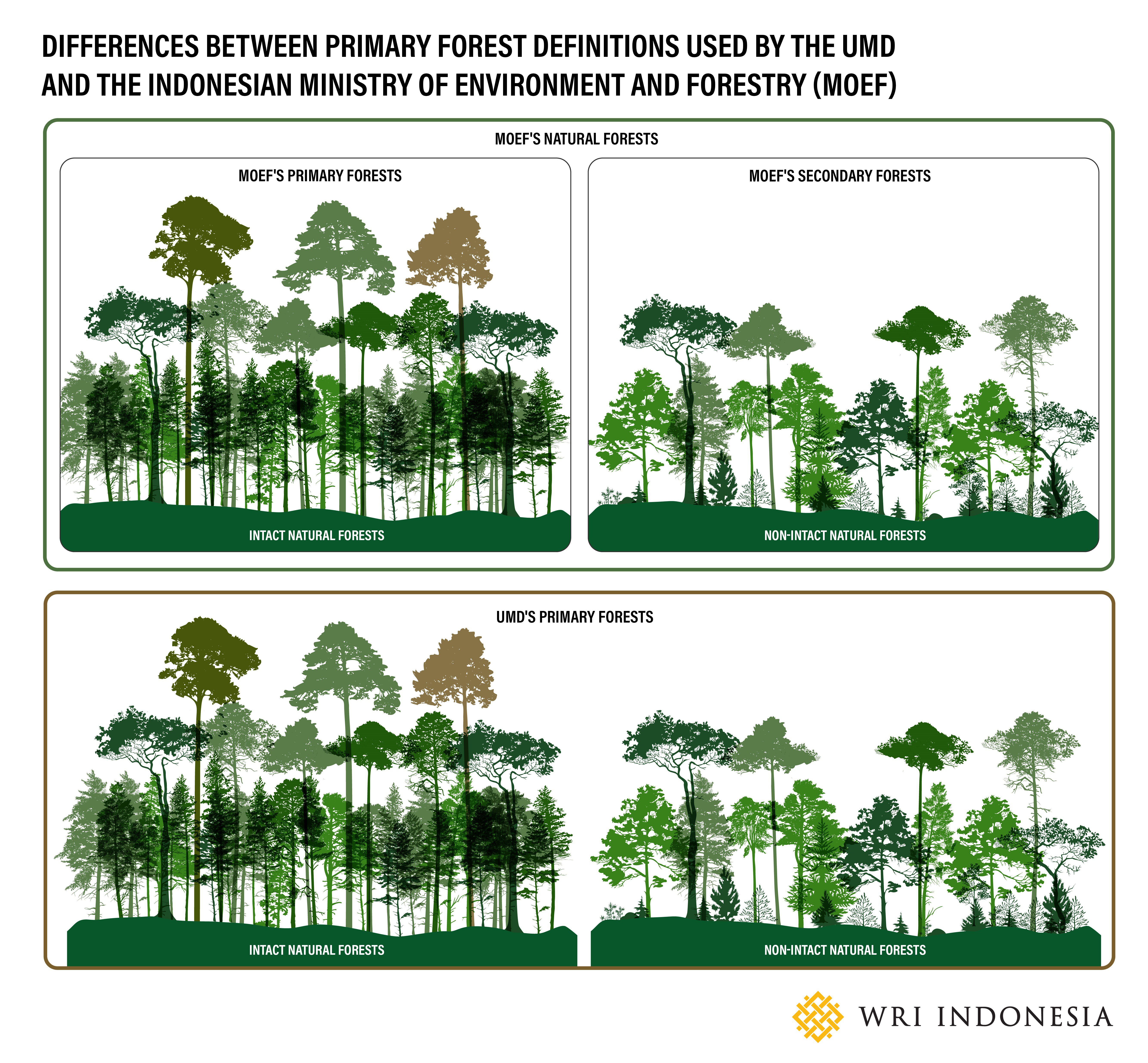 Why did GFW choose to use a definition of ‘primary forest’ that includes non-intact natural forest?

How does GFW calculate primary forest cover loss? What are the differences to Indonesia’s Ministry of Environment and Forestry’s (MoEF) data?

Meanwhile, MoEF defines deforestation as any loss that occurs within the seven classes of forest (including primary and secondary forests on dry land, mangroves, and peat swamps, and plantations) as shown by the MoEF’s land cover map. The land-cover map is produced using visual interpretation of Landsat satellite images at a mapping unit of 6.25 hectares.

In 2019, GFW data shows that Indonesia experienced primary forest loss of 324 thousand hectares, whereas official data from the Indonesian government recorded a gross deforestation (permanent changes in forest cover without accounting for potential regrowth) of 465 thousand hectares. The estimated primary forest cover loss referred to by GFW is generally lower than MoEF’s annual deforestation data because the total area of ‘primary forest’ measured by GFW is relatively smaller compared to the total forest area measured by MoEF. 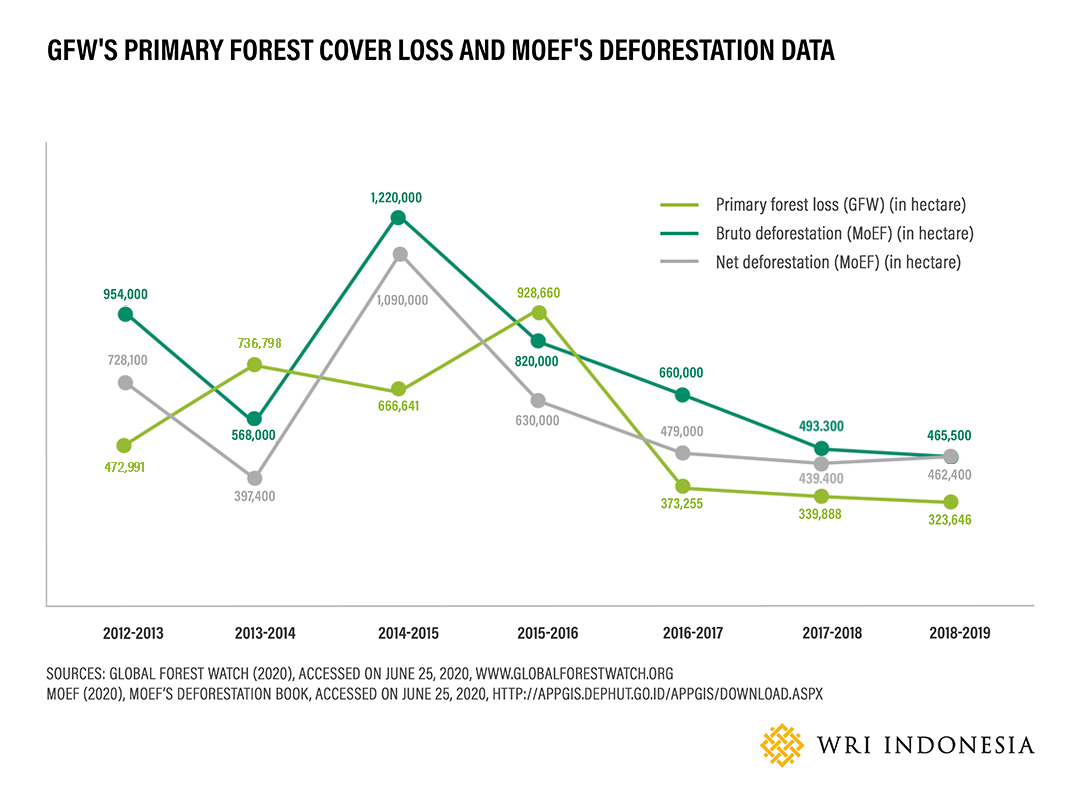 Each organization and research institution might choose to adopt various forest definitions and forest loss calculation methodology. Information produced from these different definitions and methodologies can complement each other and to create room for governments, private sector entities, and the general public for discussing and generating better information, which leads to better forest management policies.