Home > Blog > How to Cut Soil Erosion Risk in Indonesia

In Indonesia as in other farming economies, soil erosion is agriculture’s enemy: a major environmental threat to sustainability and productivity, with knock-on effects on the climate crisis and food security.

Reducing erosion risk is particularly important for Indonesia, where three of the world’s 10 watersheds with the highest erosion risk are located. Sustainable land management can help solve a multitude of problems.

Here’s a deeper look at some of the challenges and solutions to soil erosion in Indonesia:

Why Is Soil Erosion Such a Problem?

Soil is a natural resource that may look robust and endless, but in fact it is the fragile product of thousands of years of formation. Topsoil, which lies closest to the surface of the land, contains essential nutrients for crops. It is this layer of soil that is endangered by wind and water erosion. Erosion decreases soil fertility while sending soil-laden water downstream, which can create heavy layers of sediment that prevent streams and rivers from flowing smoothly and can eventually lead to flooding. Once soil erosion occurs, it is more likely to happen again.

This is a global problem, with soil eroding more quickly than it is being formed, causing land to become unsuitable for agriculture – a particularly serious concern in a world where the population is expected to top 9 billion by mid-century. Smarter land management is a necessity.

Soil erosion degrades land, which means it can support fewer plants that can take in climate-warming carbon dioxide. Soils themselves could potentially sequester enough greenhouse gases in a year to equal about 5% of all annual human-made GHG emissions. Land management can help keep soils intact so they can grow more carbon-sucking vegetation. This is already happening in China, where the Grain-for-Green project in the Yellow River basin conserved soil and water and has reduced carbon emissions.

On the flip side, unchecked climate change can worsen erosion and its impacts. A report from the Intergovernmental Panel on Climate Change found that when cultivated without conservation practices, soil is currently eroding up to 100 times quicker than it’s being formed. The risk of erosion will become even higher in the future due to temperature changes, with resulting decreases in agricultural production, land value and human health.

Why Should We Care About Soil Erosion in Indonesia?

Indonesia has a tropical climate prone to downpours and a hilly terrain, which create a high risk for erosion. The deadly floods that battered Jakarta and other areas starting on New Year’s Eve 2019 are the latest disastrous example. Eroded sediments from upstream clogged Jakarta’s rivers and canals, causing them to quickly overflow.

The archipelago’s increasing population – from 211 million to 267 million over the last two decades]( https://data.worldbank.org/country/indonesia) – puts even more pressure on the land to produce food, leading people to carve agricultural fields out of steep slopes. Farming on hillsides requires careful handling to avoid soil erosion, but this frequently doesn’t happen. On Java, this trend coupled with Indonesia’s naturally rainy climate and mountainous landscape has resulted in annual erosion of between 6 and 12 tons per hectare per year. For comparison, erosion is 0.7 tons per hectare per year in the United States. This loss of productive land creates big economic losses. In Java, soil erosion is responsible for a 2% loss in total agricultural GDP, taking into account the losses farmers face directly and the losses others face downstream. Another study showed that the cost of soil erosion in Sleman, a district located in Java, is equal to 17% of an average farmer’s net income per hectare of agricultural land. 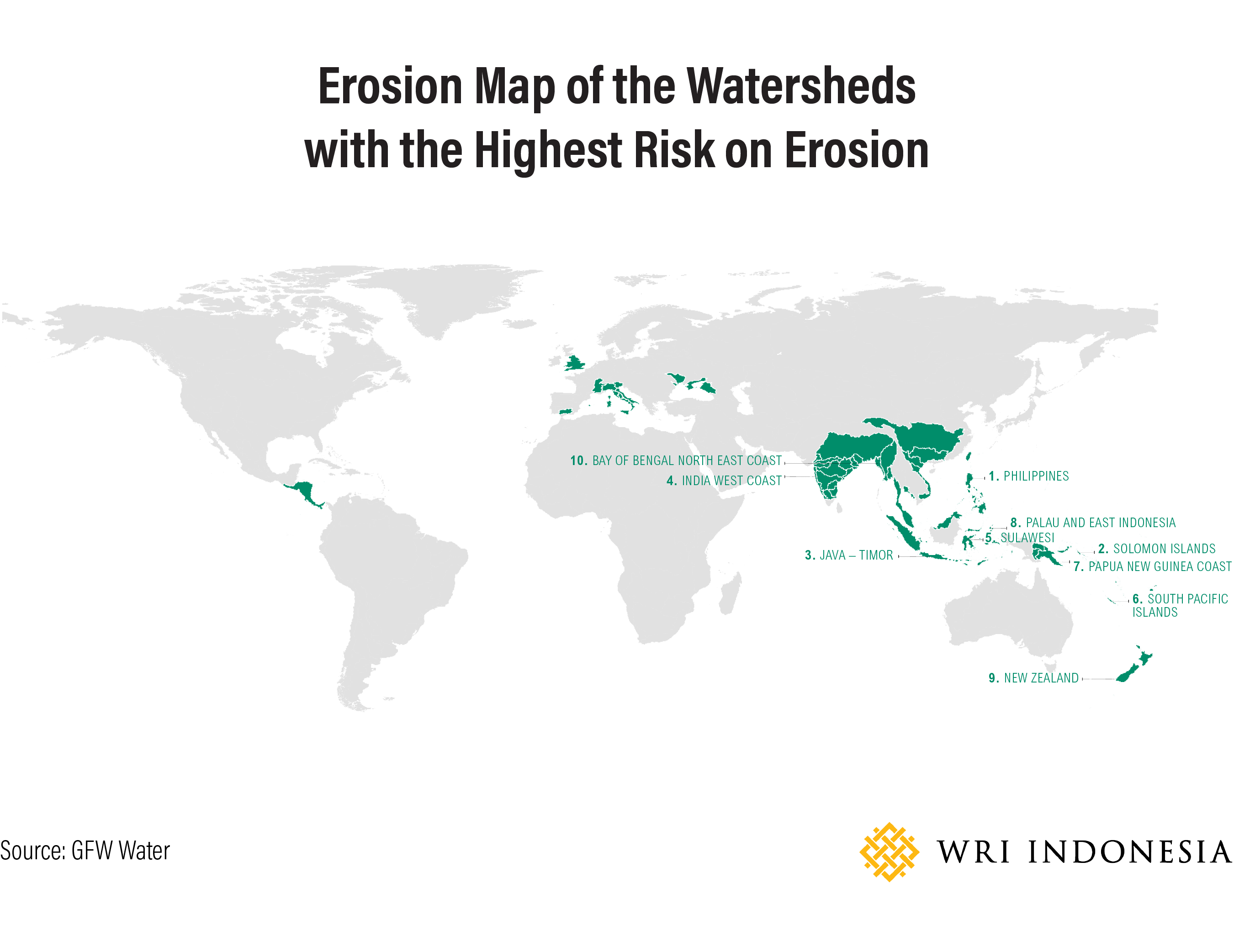 Terraced farming needs to be implemented to make hillside agriculture manageable. Terraces prevent erosion and let more water get to growing crops. In addition, hillside farm fields need full crop cover to help keep soil in place. This can be accomplished by intercropping, which means growing two crops together in the same field, such as planting rows of maize or soybean between rows of oil palm trees. For smallholders, agroforestry systems where a diverse set of crops are grown together can be effective. Access to manure improves the organic matter of the soil, which inhibits erosion. Finally, alternating deep-rooted and shallow-rooted crops improves soil structure and reduces erosion at the same time.

Although the science of sustainable land management has been gaining support, the socio-economic context often makes implementation difficult. Sustainable land practices need to be financially viable for farmers. Anti-erosion measures have a median cost of $500 per hectare, a considerable investment for a farmer. Governments and banks must help farmers get access to credit and support in implementing preventive erosion measures. This is not only a good deal for the farmer, but also for the whole community. The cost of prevention is far lower than the price of restoration and rehabilitation, which one source estimated is around $1,500–$2,000 per hectare. Another source found it could reach $15,221 per hectare.

The key to managing and reducing soil erosion is to rehabilitate already-damaged land, stop further degradation, and put erosion-preventative measures at the core of land management policy. In this way, we can prevent hunger and mitigate the climate crisis.