The Pacific Ocean’s marine resources are a source of income, foreign exchange, employment and nutrition to many countries. However, illicit trade of these valuable resources is robbing Pacific Ocean economies of these benefits.

However, these financial losses increase in magnitude if you count the economic activity that would have followed from fish entering the formal economy in that country—with the upshot that the economic impacts of illegal trade in unreported catch could be much bigger than previously thought.

How Big Is Illegal, Unreported and Unregulated Fishing?

The term “Illegal, Unreported and Unregulated” (IUU) fishing covers a wide range of activities that have many negative impacts, such as contributing to overfishing and affecting the sustainability of legal fisheries.

In this paper, we confine our analysis to the issue of illicit trading of marine resources. Illicit trading is defined as trade that involves money, goods or value gained from illegal and unreported fishing of fish stocks by domestic industrial fishing fleets and artisanal fishing vessels that catch fish for commercial purposes.

By its nature, illegal and unreported fishing is hard to study. When fish is caught by unregistered operations in excess of quota, or traded off the books, estimating its impacts can often only be accomplished indirectly. Data is so scarce that policymakers continue to rely on evidence dating back to 2009 to define the scale of the problem.

Moreover, the full range of impacts caused by illicit trade won’t be captured just by summing the values of the stolen fish. What kind of income, for households and governments, would that activity have generated?

To achieve this wide-angle perspective, we measured losses across four dimensions: economic losses across the fish value chain; loss of household incomes; loss of tax revenues; and environmental loss. This approach provides the advantage of not only generating an estimate of the scale of the problem, but also identifying the implications for households, communities, businesses and governments. 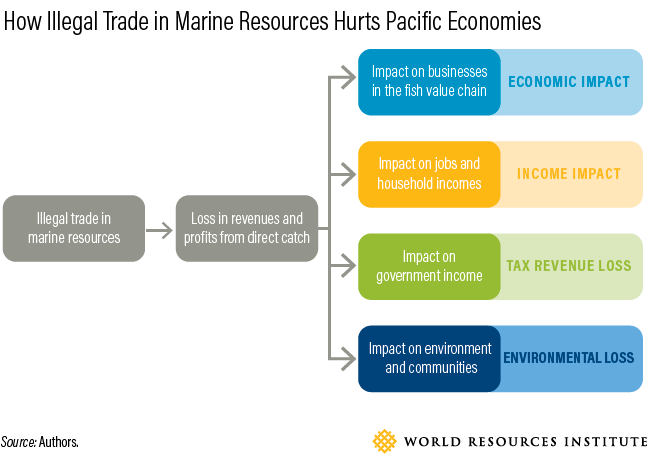 Economic losses across the fish value chain: Estimated at $10.8-$21.1 billion per year

For most countries, the ﬁshing industry contributes less than 1% to their gross domestic product. However, its total impact on the economy is considerably greater when we consider its impact on other industries. Before reaching its destination (be it on our dinner plate or as feed for livestock), the landed fish changes hands several times, for example through intermediaries who purchase larger quantities for processing. Each transaction generates a value that can be attributed to the fishery where the fish was initially captured. Hence for every fish stolen, there is a range of potential added value across the supply chain that is lost with it.

Some part of the unreported catch might get traded illegally within the Pacific region and, at some point, enter the fish value chain, resulting in the partial recovery of these losses. For example, a 2014 study estimated 20 to 32 percent of seafood imported into the United States was coming from illegal, unregulated, or unreported fishing abroad. However, there is lack of information on what proportion of these seafood imports are originating from illegal fishing in the Pacific Ocean versus other regions. This makes it difficult to estimate the proportion of illegal catch re-entering the domestic supply chain of Pacific countries via intra-regional trade.

Loss of household incomes: Estimated at $2.8-$5.4 billion per year

With reduction in formal economic activity, there will be less household income to seafood workers across the fish value chain which includes activities such as boat building/maintenance, equipment supply and the restaurant sector.

When fishing isn’t reported, governments can’t collect taxes on it. These tax revenues could have been spent on public services such as infrastructure, education or health care, or even on activities that protect fisheries and other marine resources in the first place.

Environmental impacts from IUU fishing include reduction in fisheries productivity due to depleted stocks, risk of species extinction, impact on marine food webs and reduced ocean resilience to adapt to climate change. All of these hurt the economy and hamper progress on global goals such as attaining food security, reducing poverty and achieving sustainable economic growth targets.

These impacts also result in wider costs to communities such as losses in employment and income for legitimate fishers, losses for the tourism sector and disruption of social cohesion in fishing communities. IUU fishing has been consistently linked with modern slavery, labor violations and corruption, especially in Southeast Asia.

Which Countries Are Most Affected by Illegal Trade in Marine Resources? 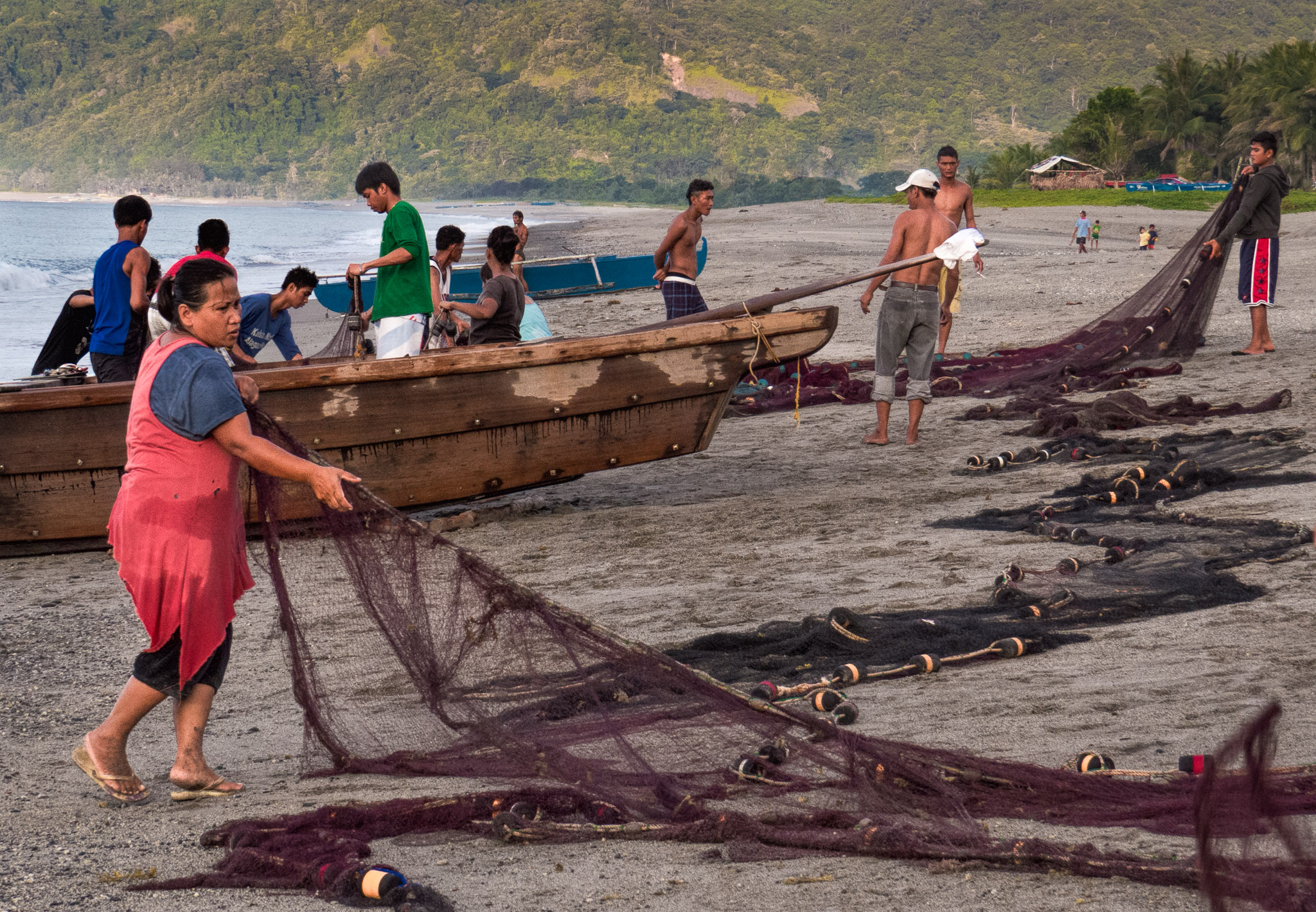 There are several social, economic and institutional factors that drive illegal fishing globally. For example, the countries most vulnerable to IUU fishing are those with weak governance and insufficient capacity to police their waters. Similarly, poor socio-economic conditions in some vulnerable fishing communities make them easy targets for recruitment into criminal activities. Moreover, globalization has enabled criminal networks to expand the scope of illegal fishing operations and use fishing vessels for related crimes, such as drugs and weapons trafficking, and human abuse, and use of the proceeds to finance terrorism. There are also economic causes of IUU fishing which include overcapacity of existing fleets, ineffective management and prevalence of subsidies. Operators engaged in IUU fishing move from one jurisdiction to another, targeting areas where combination of these factors make illegal fishing a profitable and relatively low risk activity.

In the Pacific, the Central Western part takes the brunt of the hit: About half of the estimated catch by volume illegally traded in the Pacific (1.9--3.6 million tonnes) comes from this region, which includes the Exclusive Economic Zones (EEZs) of Cambodia, Indonesia, Malaysia, Palau, Papua New Guinea, Philippines, Thailand and Vietnam. One out of five fish caught in the region is illegally traded, resulting in annual losses of $6-10 billion. (Exclusive Economic Zones are the area within 200 nautical miles of a country's coast, where that countries retains sole right of use.)

In the Central Western region and beyond, the people and fisheries of the Pacific desperately need urgent and targeted intervention to address the issue of IUU fishing. Eliminating illegal and destructive fishing practices is a necessary pre-conditionfor countries achieving a large number of their sustainable development goals and targets.

What's more, curtailing IUU fishing has the potential to generate an increase in catch and profit, often at little or no cost to local economies or in terms of food provision. (Future opportunities for action to combat IUU are explored further in the forthcoming Blue Paper commissioned by the High-Level Panel.) Such measures will also be important to ensure that a few entities are not benefiting at the expense of legitimate industries, hardworking communities and fishing nations. The cost of inaction does not stop at the large social, economic and environment losses described here---their reputation is also at stake as IUU becomes a topical issue within international mainstream media and a growing group of concerned consumers.