This article was published by marinetrends.id on September 9, 2019.

Nearly half of the earth’s population depends on seafood as primary protein. Indonesia, currently the world’s third-largest producers of seafood in aquaculture farms, puts a high target in fisheries sector  (from 8% of the total GDP in 2017 to 11% this year). To meet this target, Indonesia will grow its aquaculture sector due to the decline in production of capture fisheries. This article discusses the key aquaculture production activities: Hatchery, Farming, Feed Production, and Processing. 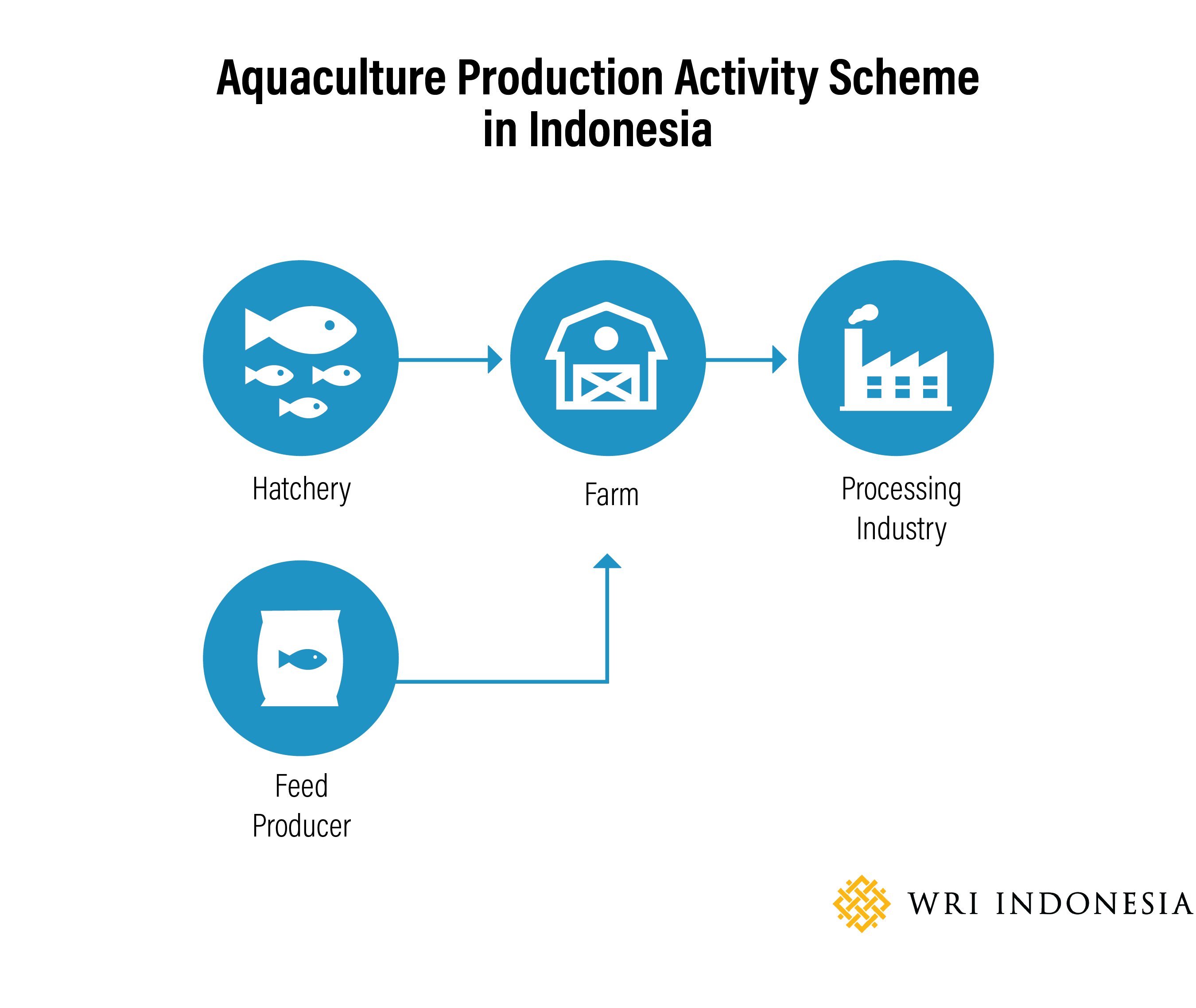 Hatchery facilities selectively breed seafood broodstock – mature species for breeding purposes –  to generate seeds as well as raise and nurture the seeds to be ready for distribution to the farm. Whiteleg shrimp (also known as vannamei shrimp) is a seafood whose seeds are highly distributed in Indonesia – accounting for more than 70% of all seafood seeds distributed nationally in 2017. This shows high demand for this species across provinces.

Availability of seed, both quantity and quality, is crucial for aquaculture. In terms of quantity, limited hatchery facilities, long distance between hatchery and farming sites as well as the double increase of air cargo price have led to reduced number of seeds being distributed to farms.

In terms of quality, low quality of seeds are highly vulnerable to disease outbreaks, eventually leading to a decline in seafood production. Poor hatchery management, for instance in-breeding practices, degrade the quality of seafood seeds and reduce their resistance from certain pathogen (SPR). To produce high quality seeds, we need broodstock in high quality too. Take vannamei as an example. In 2019, almost 100% members of Shrimp Club Indonesia import vannamei broodstock from Hawaii to ensure better quality of seed. That said, imported broodstock still needs to be monitored to ensure that the broodstock is free from disease and pathogen.

Aquaculture species rely on feed to be fully grown effectively, but challenges in cost often persist. Feed expenditure make up most of the aquaculture production cost (can reach up to 60-70%). In Indonesia, feed is often expensive as the majority of its raw materials are imported.

The imported raw material for feed is preferred thanks to its quality and traceability. One of the requirements for seafood export is certification, ensuring those seafoods come from responsible source, including the feed and its raw materials. Domestic raw materials often do not meet this requirement, which is why 90% of raw feed materials for Vannamei shrimp, one of the main export commodities, are imported. 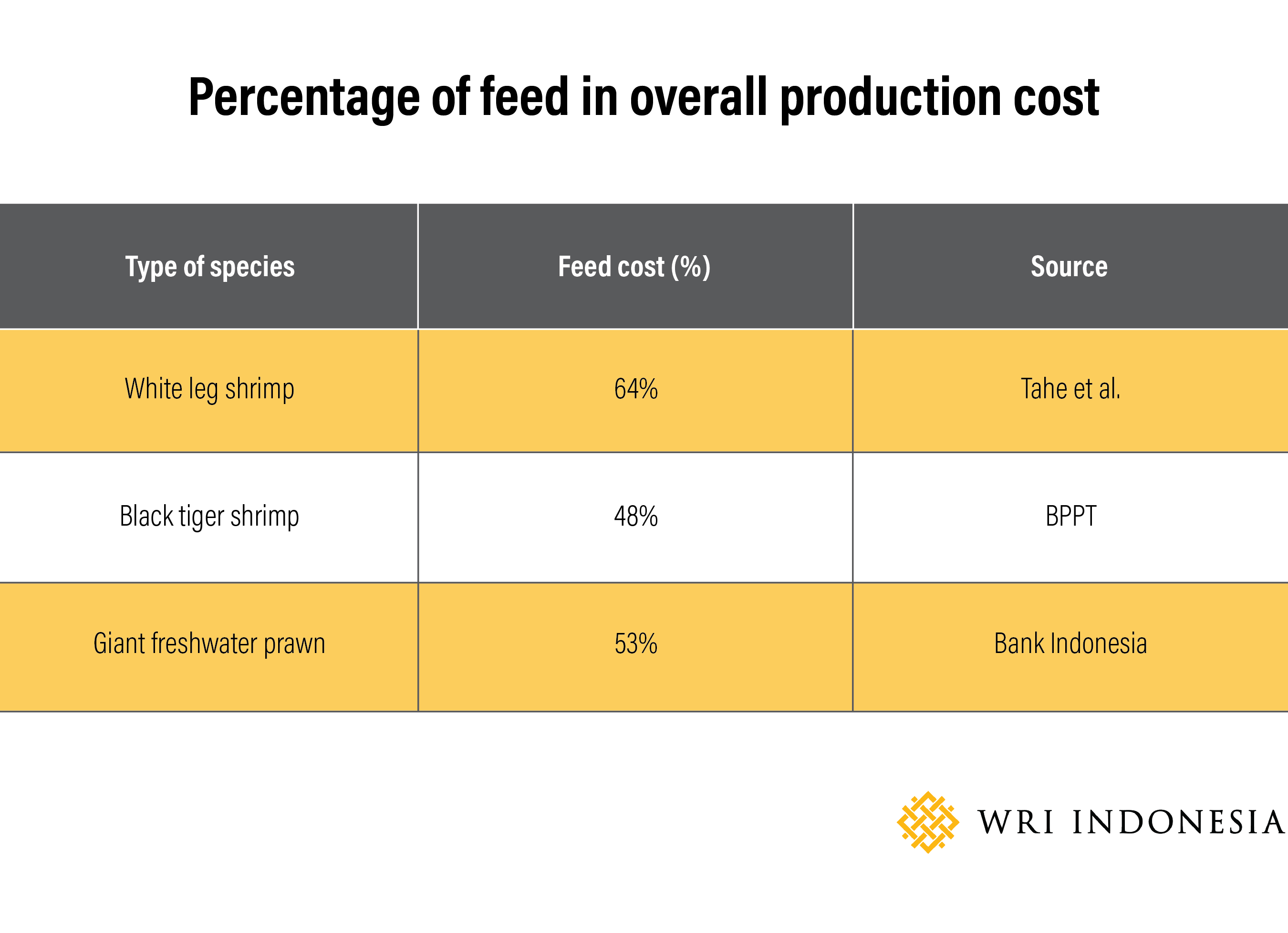 Indonesia's dependence on imported feed raw materials leaves the nation susceptible to world market fluctuations. It is necessary to identify and promote domestic aquaculture feed. Even though the government has started Independent Feed Initiative (Gerpari), the amount of a high-quality feed produced through Gerpari is not sufficient. It is highly imperative to explore more sustainable approach and strategy such as developing domestic feed raw materials industries while ensuring its traceability.

Farming sites are where the seeds grow into mature species. Unfortunately, the expansion of aquaculture farming sites has become major threats for environmental degradation. For example, while shrimp contributes the highest value in aquaculture production, the expansion of shrimp ponds resulted in massive coastal ecosystem (i.e. mangrove) degradation. Indonesia has the fastest mangrove degradation in the world, and land conversion to shrimp ponds is one of the primary reasons.

Due to the perishable nature of fisheries products, adequate handling and preservation techniques are required to maintain the products’ quality and nutritional characteristics. Hence, processing facilities are critical. 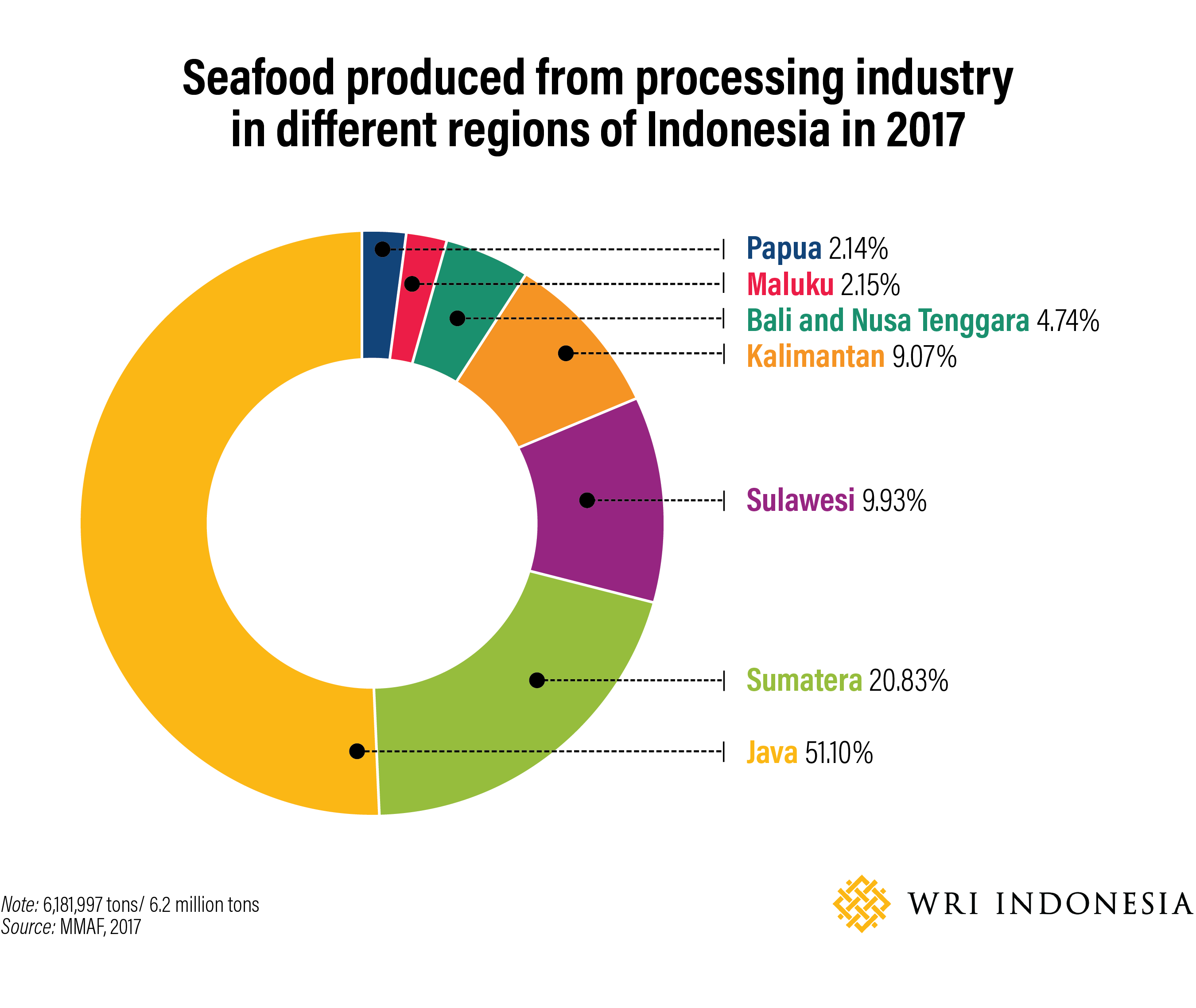 Fisheries processing unit depends on various other infrastructures, particularly electricity. The lack of electricity in some parts of Indonesia restrains the development of processing industries, making  facilitates concentrated in Java. With most of the facilities located in Java, distance between the faming sites and the processing facilities have become furthered away. The Ministry of Maritime and Fisheries is attracting investors and funders to improve the growth of fish processing industries, such as the recent agreement in North Sulawesi where good development in marine and fisheries sector and adequate social situation have been noted. To complement such effort, the government needs to establish necessary infrastructure, particularly electricity.

Aquaculture is essential for Indonesia. Managing aquaculture’s four production activities well is central to ensure sustainable growth of aquaculture in Indonesia.  This requires changes in the production system, increase in investment, and policy to protect the sector from economic and environmental risk.