The ocean contributes $1.5 trillion annually to the global economy and assures the livelihood of 10-12 percent of the world’s population. But there’s another reason to protect marine ecosystems—they’re crucial for curbing climate change.

A Key Moment for the Ocean and Climate Action

Today is World Oceans Day, exactly one year from the first UN ocean conference. This year is shaping up to be a critical one for ocean action. The 53 member countries of the Commonwealth adopted the Commonwealth Blue Charter on Ocean Action earlier this year, a plan to protect coral reefs, restore mangroves and remove plastic pollution, among other actions. Ocean conservation is the centerpiece of the upcoming G7 meeting. Kenya is holding the inaugural Blue Economy Conference in November. And substantial negotiations for a new UN treaty for conservation of the high seas will begin in September.

This year is also a turning point for international climate action. The first stocktake of progress under the Paris Agreement on climate change, known as the Talanoa Dialogue, is currently underway, and is expected to highlight opportunities for countries to further advance climate action. Countries are also expected to agree later this year on a rulebook for implementing the Paris Agreement.

The ocean and coastal ecosystems provide an untapped, nature-based climate solution that needs to be part of both conversations. 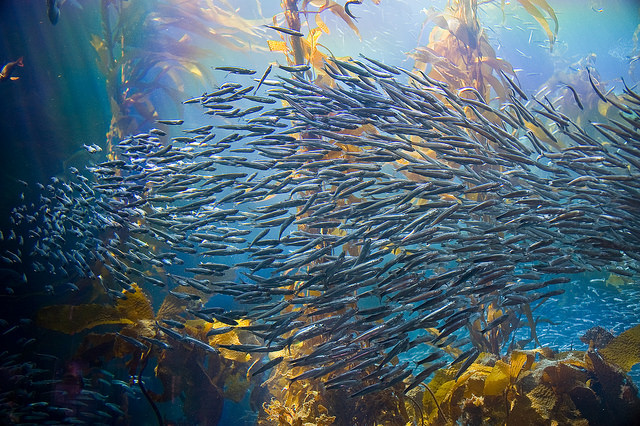 Mangroves, seagrass meadows and kelp forests (shown here) are 10 times more effective at storing carbon than some types of forests. Photo by oliver.dodd/Flickr

The Ocean As a Climate Solution

“Blue carbon” ecosystems such as mangroves, seagrass meadows and kelp forests are 10 times more effective at sequestering carbon dioxide on a per area basis per year than boreal, temperate or tropical forests, and about twice as effective at storing carbon in their soil and biomass. They also play a crucial role in protecting coastal infrastructure and communities from climate impacts, including extreme weather events.

National Climate Commitments: An Opportunity to Advance Action on Climate and the Ocean

Countries have made commitments to advance climate action in line with the goals of the Paris Agreement. Known as Nationally Determined Contributions (NDCs), the ocean and coastal ecosystems are currently underrepresented in these commitments.

There are a number of policy options for incorporating blue carbon ecosystems into NDCs. These include:

Of course, curbing climate change isn’t the only reason to invest in ocean and coastal ecosystem protection. Coastal ecosystems can also strengthen coastal communities’ resilience to natural hazards—including storms (mangroves absorb the energy of storm-driven waves and wind), flooding, erosion and fire. Wetlands provide nurseries for the many species of fish that support economies and improve food security. And marine protected areas can also protect biodiversity.

Fighting climate change is just yet another benefit the ocean provides us. It’s time to start recognizing its protection as a climate change solution.