The Jakarta floods in early 2021 shows how the city's drainage network can no longer accommodate rainfall, resulting in floods in various locations. Aside from drainage issues, there are three key contributing factors to Jakarta’s flooding:

Second, changes in land cover. Land cover data from the Ministry of Environment and Forestry (MOEF) for 2000 and 2019 show growing plantation forests by up to 117.7 percent upstream of the river that flows into Jakarta, replacing agricultural lands. Settlement areas have also grown rapidly by 47.4 percent, replacing agricultural lands and green open spaces in central and downstream areas. Green open space only made up 9.8 percent of Jakarta’s area by 2019. This has increased the risk of overflowing rivers and drainage networks due to high volume of runoff, water, not to mention the threat of sedimentation in rivers due to high erosion rates in upstream areas.

Third, land subsidence. Land subsidence in Jakarta averages at 12 cm/year. It is even more extreme in the northern coast with a subsidence rate of up to 25cm/year. According to Takagi et al. (2015), subsidence-related flooding will expand by 100.5 km2 by 2050, covering 75 percent of North Jakarta. Building loads and excess groundwater extraction have further accelerated land subsidence. Currently, around 35% of Jakarta residents still use groundwater for their daily needs. As a result, Jakarta’s groundwater level and water storage capacity have continued to decline. 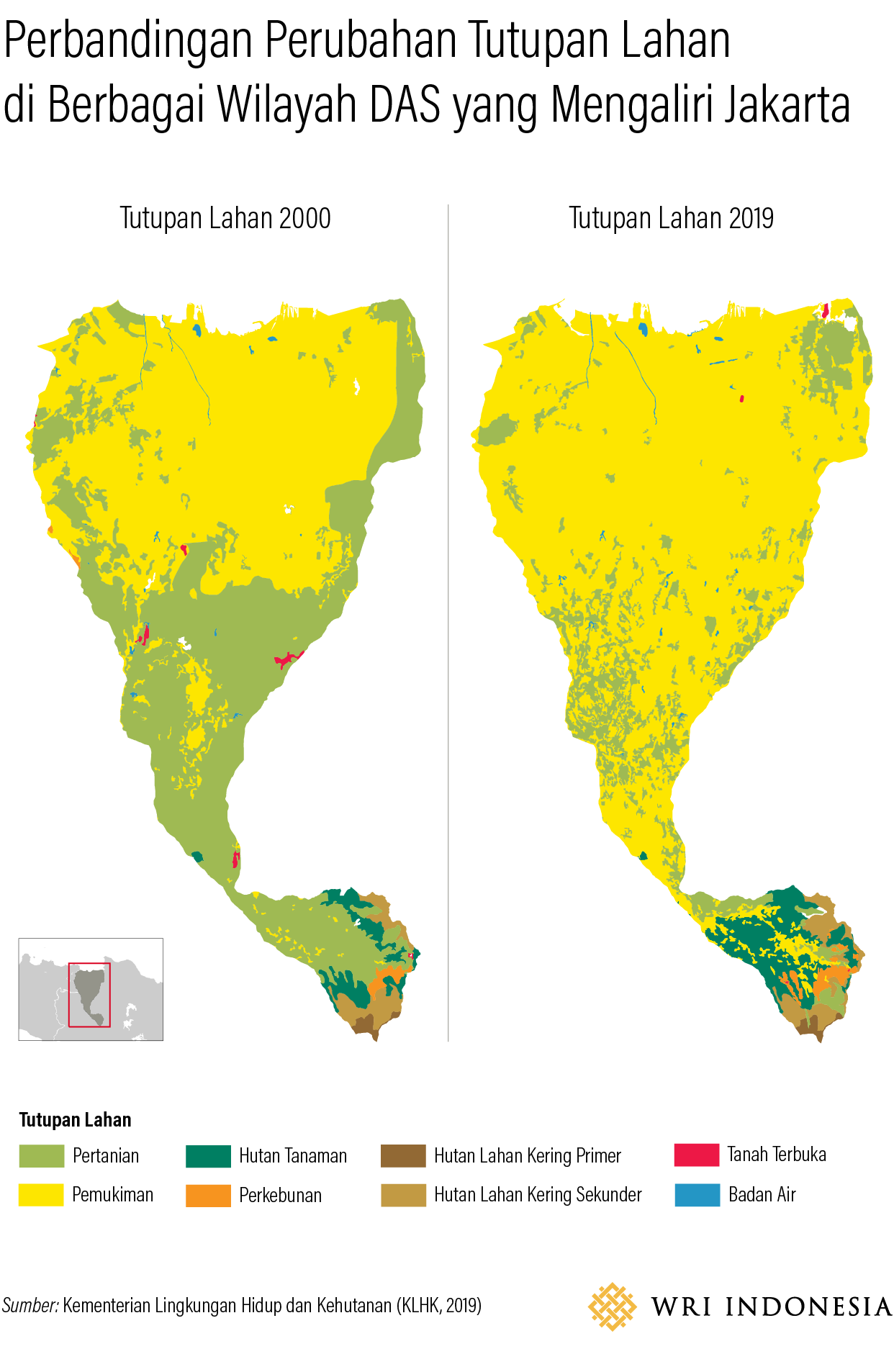 Today, Jakarta's flood control efforts have been focused on physical infrastructure (grey infrastructure) through the construction and expansion of reservoirs, water pumps, polders and canal maintenance.

However, such physical infrastructure’s effectiveness is limited, especially against climate crisis. This was proven when the flood walls in New Orleans collapsed during Hurricane Katrina. Therefore, a different, more adaptive approach is needed through NbS that involves various natural functions such as intersepsi air hujan melalui vegetasi, rainwater interception to increase rainwater storage capacity or water flow restriction to reduce erosion. In urban areas, the NbS approach also offers other benefits such as polutant filtration to reduce the impact of urban heat island1. 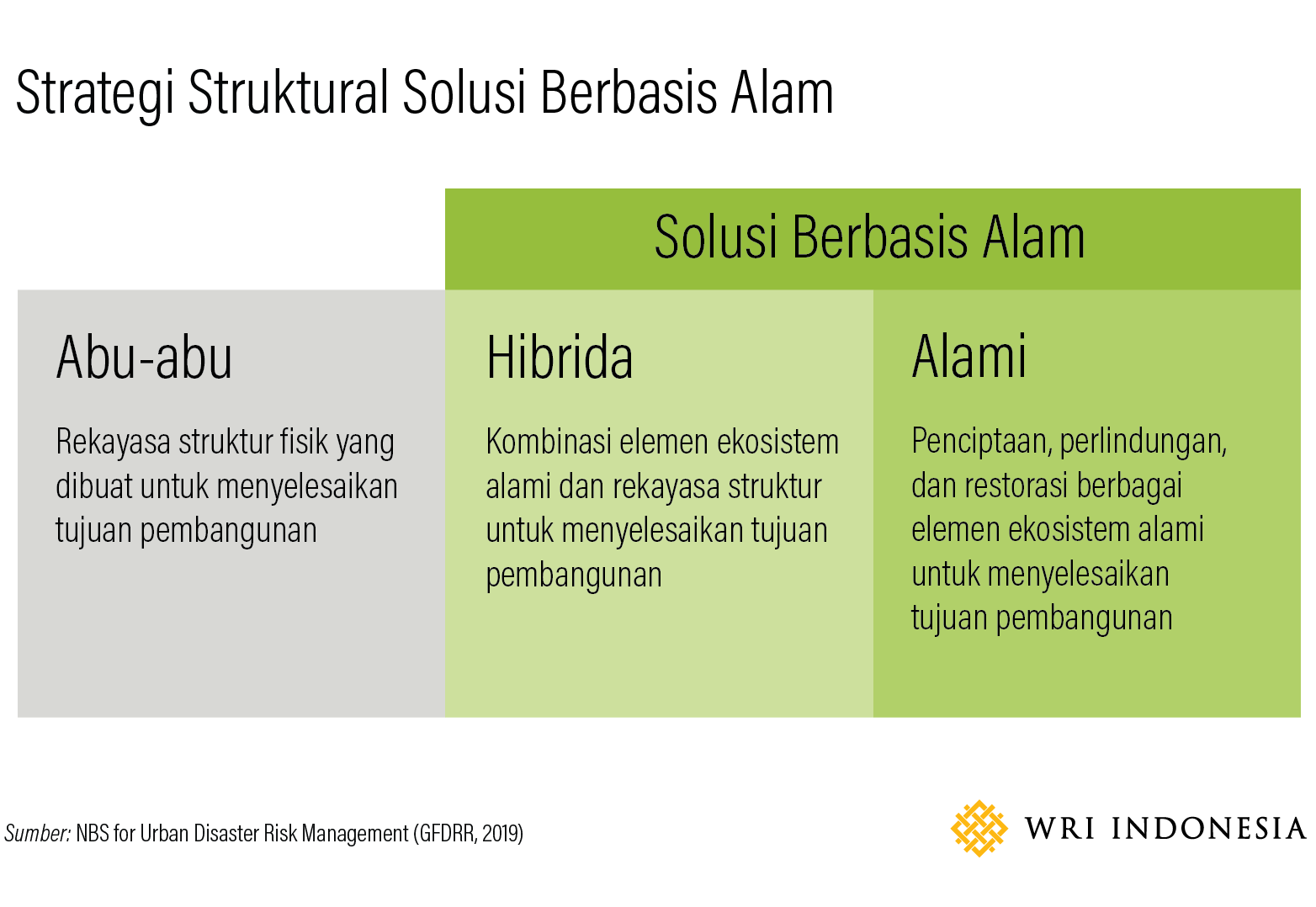 The adaptive solution of hybrid infrastructure suits Jakarta due to its applicability beyond river areas. The solution is applicable in residential areas to expand runoff control capacity to prevent local flooding. 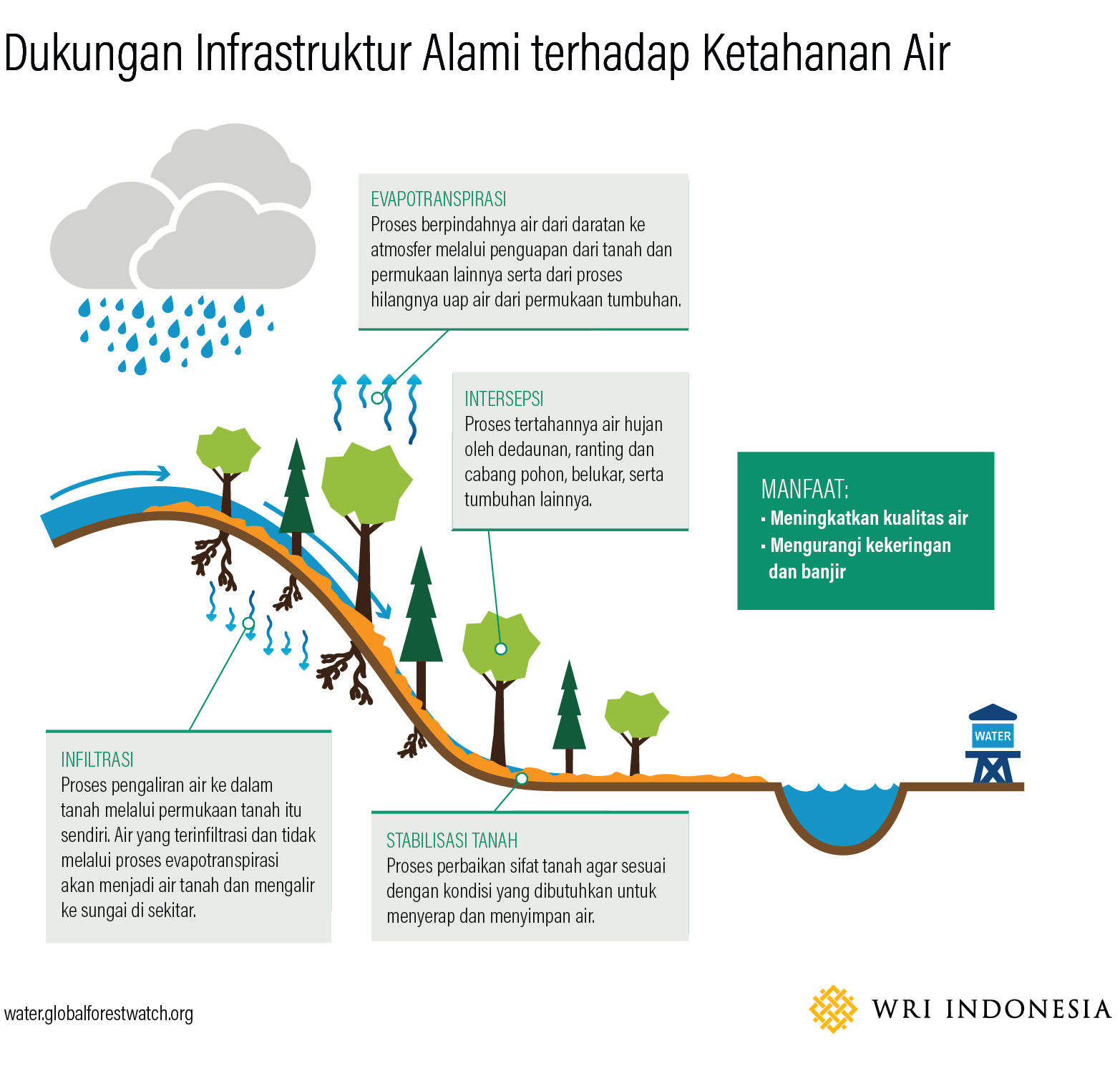 On the smallest scale, such hybrid infrastructure can take the form of biopore infiltration holes, green roof and rainwater collection tanks. Alternatives on a larger scale include multifunctional Green Open Space (GOS) as a water catchment pond, bioswale2 and permeable pavement3. Bioswale and permeable pavement can also serve as filters to prevent rainwater pollutants from entering the drainage. Vegetation cover from green roofs and GOS can also reduce air temperature and energy use for air conditioning, in addition to being decorative.

The Jakarta government through Governor Instruction No. 52 of 2020 has begun efforts to adapt the NbS approach through several intervention plans, such as GOS function expansion, vertical drainage or infiltration wells under collaboration with related agencies.

Here are some recommendations for the implementation of NbS in Jakarta:

When implemented optimally, the NbS approach can be an efficient alternative not only to support efforts for flood risk mitigation in Jakarta, but also to help increase green elements and create a more energetic and comfortable city.