Leonardo DiCaprio’s new film, Before the Flood, is a sobering work, at once beautifully crafted and painful to watch. DiCaprio guides the audience on a global tour of how climate change and the forces driving it are upending human lives and fraying the biological fabric of the planet. We see the vast scale of humanity’s footprint across the globe, from smog-choked Beijing to the blackened moonscape of the tar sands in Canada; the toll of rising seas from Miami to the Pacific islands; the melting of the Greenland ice sheet; and the destruction of great rainforests for cattle ranching in the Amazon and palm oil plantations in Indonesia. It’s a reminder of the enormity and complexity of the forces driving climate change.

The many experts DiCaprio interviews make it clear that the worst is yet to come unless humanity makes a radical U-turn in the way we produce and consume energy, food and just about everything else.

In fact, the film’s leitmotif is Hieronymus Bosch’s iconic painting The Garden of Earthly Delights, which opens and closes the film. The left panel of the triptych depicts the Garden of Eden; the large central panel depicts the dominion of humankind over the planet and its diverse plants and animals; the right panel takes us to a doomscape of blasted earth, fire, torture and death. In DiCaprio’s view, humanity is poised to fall from the central panel into the right – which looks remarkably like the Canadian tar sands DiCaprio flies over early on in the film.

For me, one part of the film hit closest to home:

As a backpacker and forest researcher some 30 years ago, I roamed widely through the vast and still-pristine rainforests on the Indonesian island of Sumatra. In the mid-1990s, I researched the Leuser ecosystem of Sumatra’s Aceh province, then the focus of the largest donor-supported rainforest conservation project on Earth. Leuser’s forests, tigers, elephants and rhinos faced many threats back then, but there was much left to conserve. And there was optimism that resources and political will were finally at hand to do the job. 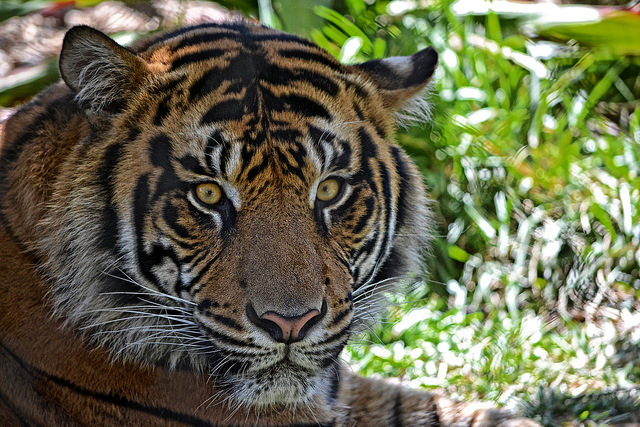 Sumatran tigers are one of many species that call Indonesia’s Leuser ecosystem home. Photo by Chris Tillman/Flickr

Two decades after I traversed those forests, DiCaprio flies into Leuser and is dismayed by the fires and haze, and by the seemingly endless rows of oil palm trees. It hits home. I have a coffee table book from 1990 on Leuser called Indonesian Eden. Much of that “Eden,” however, was cast into Bosch’s doomscape by the turn of the millennium. The 2004 tsunami, which killed 250,000 people in Aceh, brought fresh misery.

There has been some progress in Indonesia. Some major consumer goods companies and their palm oil suppliers in Indonesia have taken zero-deforestation pledges. Pulp and paper producers have made similar commitments. But it is largely too late for Sumatra. Ancient primary rainforests, once destroyed, cannot be restored to anything approaching their previous condition on a time scale meaningful for humanity. Unfortunately, there have been no consequences for the irreparable harm these companies have caused.

The film reminds us that the science is clear on climate change. What is still missing, despite the momentum of the Paris Agreement on climate change, is sufficient political will. Hopefully Before the Flood will encourage citizens to demand more attention and action from our leaders and politicians.

Before the Flood premieres on the National Geographic Channel on October 30th and can also be streamed online from the film’s website.