This article was published in The Conversation on 25 September 2020.

Forest and land fires have occurred in Indonesia almost every year since 1997.

One of the drivers of forest fire in Indonesia is dry peatland caused by land clearing for cultivation, such as agriculture and plantation.

Peatland is a type of wetland shaped by the accumulation of partially decayed vegetation through thousands of years.

Concessionaires and local communities often dry these peatlands to be planted for their source of income. 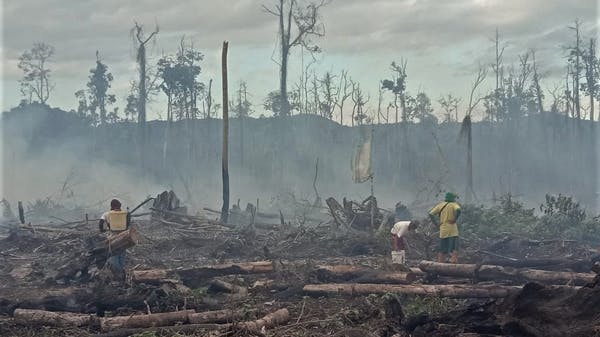 Dry peat that is prone to fire during the dry season is further threatened by the slash and burn practice. ANTARA FOTO/ManggalaAgni/JJ/foc

The smoke emitted by burnt peatlands in turn causes respiratory distress for residents not only in Indonesia, but also in neighboring countries such as Singapore and Malaysia.

In 2019 alone, forest and land fires cost Indonesia an economic loss of US$5.2 billion or equivalent to IDR77 trillion.

In addition to peatland rewetting, another strategy used in restoration is to provide an alternative source of livelihood to peatland communities to prevent community activities that are damaging to peatlands.

Unfortunately, some of these alternatives remain to be ineffective in supporting peatland restoration.

An example of such alternative is planting plants that grow in dry soil such as pineapple, coffee and dragon fruit in Pulang Pisau Regency (Central Kalimantan) and Tanjung Jabung Timur (Jambi).

This, however, didn’t end up rewetting peatlands and instead exacerbated the risk of fire. Such restoration also involves a calcification process that causes other environmental damages such as land subsidence and carbon emission.

Comprising environmental, peatland, policy, anthropology and geography experts, our team pursued an alternative source of livelihood to convert peatlands into an environmentally friendly zone with economic value as part of restoration under the Special Pilot Economic Zone (SPEZ).

The concept is derived from the special economic zone concept developed by the United Nations Conference on Trade and Development (UNCTAD) in 2008. This concept has been implemented in African countries such as Tanzania.

Tanzania has successfully developed a special economic zone that not only provides a source of income but also protects the environment.

The zone in Tanzania is a hub of horticultural smorgasbord of vegetables, fruits and potatoes.

Our research in three provinces of South Sumatra, Riau and Central Kalimantan shows a sufficient regulatory framework for SPEZ in Indonesia and these provinces, including regulations on Special Economic Zone and peatland protection as well as a number of environmentally friendly management practices.

A possible system for peatland management in the zone is paludiculture, which doesn’t require land drying and uses native plants that are adaptive to wet peatlands.

This management system can be accompanied by a community-managed business strategy under the cooperatives and Region-owned Enterprise (ROE) models.

Today, SPEZ remains an unrealized concept in Indonesia. We recommend a few necessary steps to implement SPEZ in Indonesia:

The ideal peatlands for cultivation are peatlands that have been rewetted for 1-2 years and are located outside of a protected area or primary forest (old-growth forest).

This is meant to maintain the protection of peatlands in protected areas and primary forests and at the same time avoid any potential legal violation.

Meanwhile, plant cultivation should only be permitted in shallow and medium peatlands, respectively at 50 cm and 300 cm of depth, as different peatland depths require different vegetation.

Rewetted peatlands currently can be found in a number of regencies in Riau (Siak), South Sumatra (OKI) and Central Kalimantan (Pulang Pisau).

Borders and buffer zones must also be clearly established in these areas to avoid land conflicts.

Next in our recommended step is a field study to collect and verify biophysical information such as peatland type, peat pH level, soil fertility and the water management system of the area.

Such information will help determine whether the area fits for cultivation without irrigation or land drying.

Rewetted peat is suitable for paludiculture, the cultivation of native species and other species that can grow in wet peatlands.

Social analysis is necessary to gauge the capacity of the local community to cultivate native species.

This, along with the profile of the local community, is taken into consideration in the next step, which is to determine the commodity suitable for cultivation based on the paludiculture principles.

There are 165 paludiculture crops, including sago, bitter melon, Lepironia and water spinach, that have been proven to be effective in generating source of income while restoring peatland.

Today, Lepironia is collected to be processed into wicker products in regions such as South Sumatra, Jambi, Riau and Central Kalimantan.

The handicrafts made from purun, typical plants of peatlands. Photo by Ibnu Budiman/WRI Indonesia

Paludiculture will generate ecological and economic benefits and secure food supply for the community while supporting peatland restoration.

Policy makers and economic practitioners must analyze the market opportunity of the chosen peat commodity.

A possible method is a survey on customers’ willingness to pay for the peatland products.

This will be helpful in identifying commodities with economic value to benefit local communities.

As an example, a restoration activity in South Sumatra analyzed 12 types of vegetation. At the end, water spinach was found to be a plant fit for paludiculture with a cost-benefit ratio of 2.97.

Such ratio shows that cultivating the plant would be profitable.

Cooperation among local communities, regional governments, non-governmental organizations and concessionaires will mitigate the risk of misuse of power by stakeholders.

Such cooperation will also help increase market share for peatland products through export or inter-village trades.

Improving local technical capabilities or stakeholders management, such as community groups, is also key to give them the necessary practical knowledge on sustainable peat management.