Home > Blog > Restoring Peat, Improving Welfare, and Empowering Women: Can We Have It All?

In 2015, Indonesia suffered from record-breaking fires, over 50 percent of which burned on peatland. Since then, Indonesia has doubled down efforts to protect and restore these ecosystems, which are some of the most carbon-rich in the world and a popular site for agricultural expansion. Transforming the way Indonesia manages its peatland is critical to achieving its national commitment to reduce greenhouse gas emissions as well as preventing other damaging impacts of fires, including school closures, respiratory issues, and premature deaths. In this third installment of the Peatland Governance Series, we explain how restoring and preserving native plants in a peat ecosystem can improve the welfare of people surrounding it, especially women.

In carrying out the mandate to restore 2.49 million hectares of degraded peatland across seven priority provinces, the Peat Restoration Agency (BRG) utilizes three-pronged approaches in restoration: rewetting, revegetation, and revitalizing local people’s livelihood. The last approach focuses on improving the welfare of those who reside within or near the peat ecosystem through sustainable peat management. The livelihood revitalization is important to ensure the success of restoration in the long run, given that local communities will only protect the ecosystem when they consider it valuable for their lives.

In many peatland villages, the livelihood options might include the utilization of commercially worthy native peat commodities. One of the popular commodities in Sumatera is purun (Lepironia articulata), a peat sedge plant easily found in peat swamp areas in Indonesia and neighboring countries (e.g. Thailand and Malaysia). In many villages within the province of South Sumatra, a priority province for peatland restoration, purun has traditionally been utilized as raw materials for homemade crafts, mostly mats, by several communities living near peatlands. 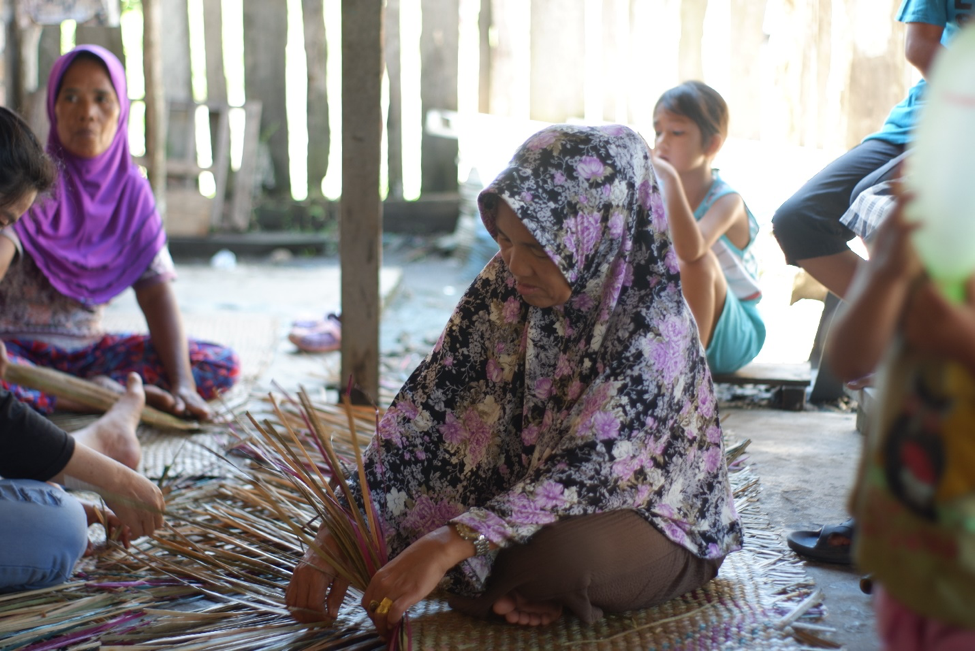 Purun weaving is culturally significant to many South Sumatran peat communities, for example to those living in Pedamaran, a sub-district with substantial extent of peatland. Here, woven purun mats are regularly used at celebrations of key life events, such as the use of plaited purun mats as container for newborns’ placentas, bedding for newlyweds’ first night, and cover for corpses during burial ceremony. The skill of purun weaving, carried out daily by the women of Pedamaran, is traditionally passed down from one generation to the next. 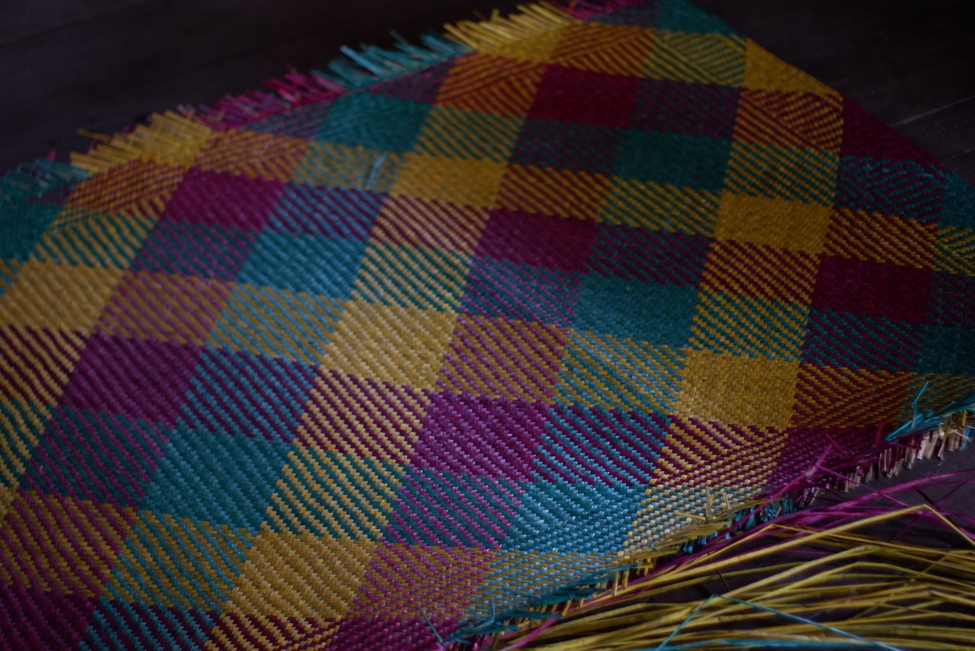 Our preliminary research at Pedamaran finds that besides its cultural significance, purun also provides additional economic benefits to the local communities, especially women. The mats from Pedamaran are commonly sold in other villages and major cities, even outside of the province, mostly through the middlemen or middlewomen. A weaver may make 30 to 90 mats in a month and usually receives between IDR 5,000 and 8,000 for one mat, depending on the size.

The income from weaving and selling mats is used to help their husbands and sustain the household’s daily needs, such as grocery shopping, children’s allowance, and for women’s personal needs. By acquiring additional income to their family, female purun weavers report they feel better positioned in their household’s decision-making process. For them, purun weaving also works as a safety net, especially when other livelihood options (e.g. rice farming and working at the oil palm concessions are not available or restricted to them. 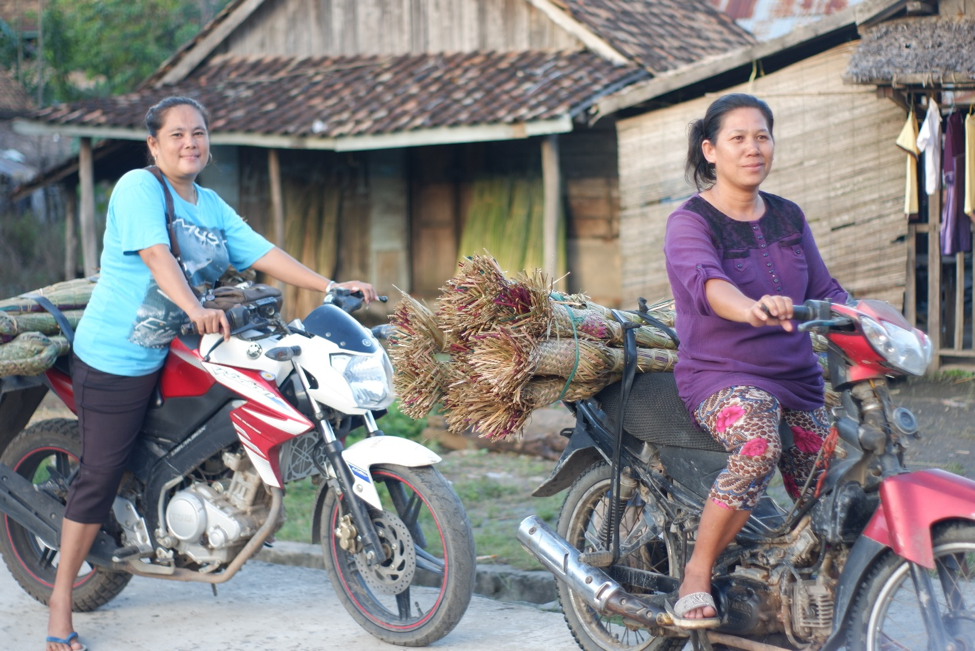 Despite the potential of purun weaving to increase the welfare of women in the village, several challenges need to be addressed by the Government of South Sumatra, potentially in collaboration with non-governmental organizations and the private sector. Firstly, according to the purun harvesters, the supply of raw materials (i.e. harvested purun plants) has been decreasing recently as a result of peat degradation and land conversion. Due to peat’s complex hydrological system, the peat conversion into oil palm plantations via land-clearing and massive draining will lead into some parts of the peat swamps being dry while others submerged in perennial flooding (see Sumarga et al. 2016). The weavers are worried about the lack of supply not only because they might lose their income, but also because some local wisdom and norms associated with purun weaving could be lost. For them, purun mats are also an identity which cannot be replaced by other types of mats.

Secondly, another key issue faced by weavers is the limited capital access. Current economic circumstances drive them to borrow money from the middlemen via the panjar, which requires the weavers to pay off their loans with the mats they produced at a substantially low price. The system has contributed to the low bargaining power of the weavers. Improving their access into more equitable and sustainable financing mechanisms (e.g. microloans) can go a long way.

Lastly, we observe a knowledge gap between market demands and the existing supply. Most weavers only plait the cheapest, simplest mats, because they are easier to make and can sell fast. Some of these are considered inferior goods, such as the drying mats for agricultural products and the funeral mats. Meanwhile, the highest quality purun mats are still rarely produced, because many of the weavers thought that such products have limited market potential given the higher price.

Our preliminary market assessment for purun products in Jakarta and Palembang (the capital of South Sumatra) suggests that the demand for high quality and value-added purun products is quite large, as more than 80% of the respondents desired products with good design and best quality. Thus, purun-based creative products, such as stylish handbags, can be sold at higher prices at approximately IDR 50,000 to IDR 100,000 each. Additionally, there is also a niche market for ‘green’ handicrafts, befitting the profile of products made of locally-sourced purun. A global study published by Nielsen (2015) indicates that there is a growing interest towards green products, especially among the millennials. The respondents aged 15-20 in Nielsen survey willing to pay more for green products increased from 55% in 2014 to 72% in 2015. To tap into these environmentally conscious buyers, the weavers can widen their horizon in looking for design inspiration and creative weaving techniques.

With the right training and innovative marketing tools, purun weaving can become an even better livelihood option for Pedamaran women. Further, by strengthening the enabling factors, e.g. the protection of peatland ecosystems, the preservation of traditional purun weaving knowledge, and the equitable financing of capitals, purun weaving can thrive, therefore supporting BRG’s efforts to restore degraded peatlands in South Sumatra.