Home > Blog > Turning Point: Which Countries’ GHG Emissions Have Peaked? Which Will in the Future?

The global community has coalesced around the ambitious goals of the Paris Agreement, one of which is to peak global greenhouse gas (GHG) emissions as soon as possible. The longer we delay the peak—the point when global emissions switch from increasing to decreasing—the more difficult it will be to limit global warming. Yet global GHG emissions are still rising and are expected to continue to climb through 2030.

The timing of when individual countries’ emissions peak and then decline—especially those of major emitters like the United States and China—is critically important in determining whether we can avoid the most dangerous climate impacts.

The paper documents steady progress in the number of countries reaching peak emissions over time. By 1990, 19 countries had peaked (representing 21 percent of global emissions) and by 2030 this number is likely to grow to 57 countries (representing 60 percent of global emissions). Among the 57 countries that have peaked already or have a commitment that implies a peak by 2030 are some of the world’s biggest emitters, including China, the United States, Russia, Japan, Brazil, Germany and Mexico. 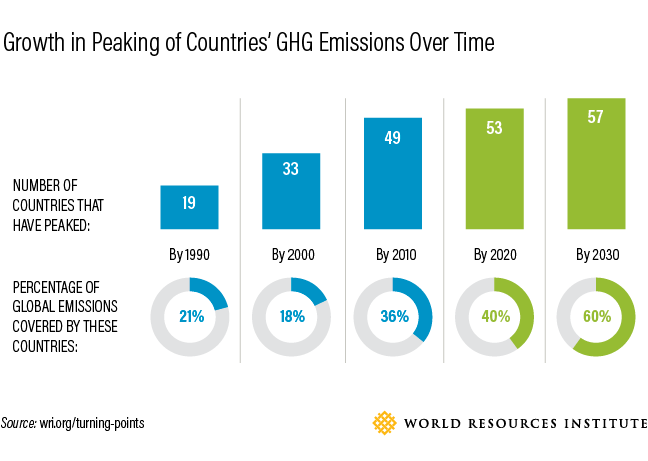 This interactive map created by Carbon Brief shows when different countries’ GHG emissions peak. Click on a country to see its emissions trendline: 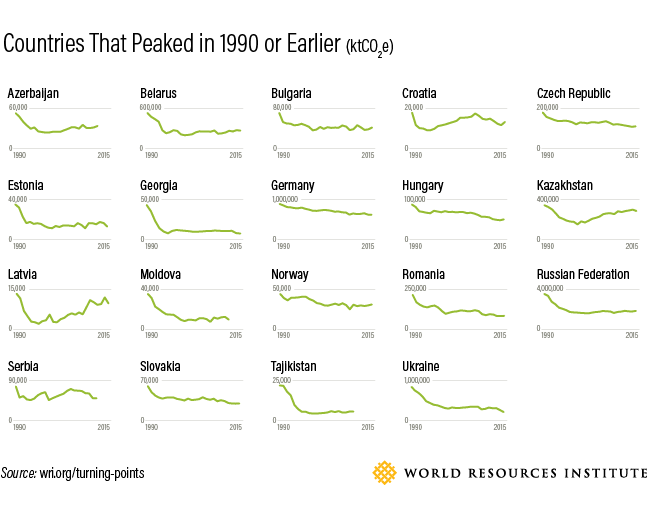 By 2000, 33 countries’ emissions peaked, representing 18 percent of global emissions (based on 2000 emissions data). Many of the countries peaking in the 1990s were European nations such as the United Kingdom, France, the Netherlands, Belgium, Denmark, Sweden, Switzerland and Finland. Costa Rica also reached peak emissions levels in 1999. 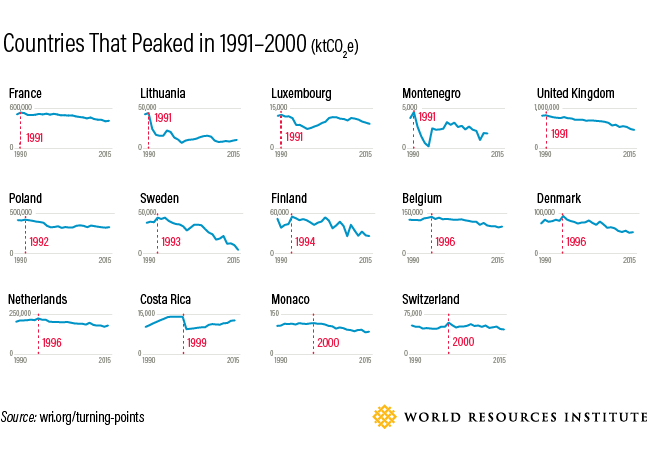 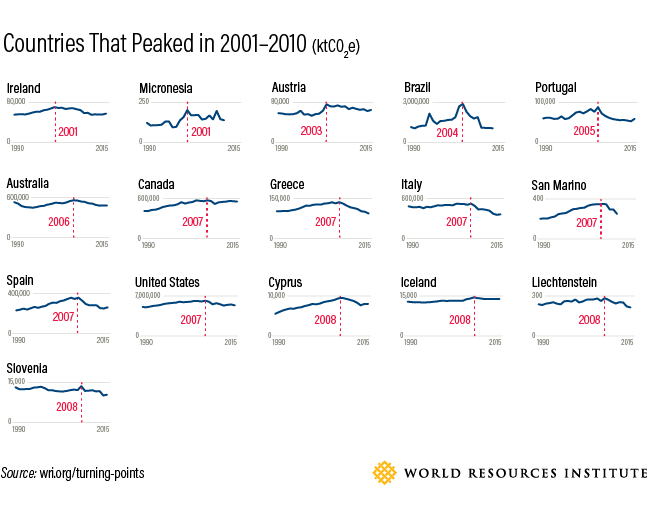 53 countries representing 40 percent of global emissions (based on 2010 emissions data rather than 2020 projections) peaked or have a commitment to peak by 2020. Countries with commitments to peak as part of their Copenhagen Accord pledges for 2020 include Japan, the Republic of Korea, Malta, and New Zealand. By 2020, almost all developed countries are expected to have peaked. 42 of the 43 Annex I countries under the UNFCCC are expected to peak—all except for Turkey.

China, the Marshall Islands, Mexico and Singapore have unconditional climate pledges under the Paris Agreement that imply a peak in emissions by 2030 (China’s commitment is for CO2 emissions only). This brings the number of countries that have peaked or have a commitment to peak by 2030 to 57, representing 60 percent of global emissions (based on 2010 emissions data rather than 2030 projections).

To be conservative, our analysis only considers countries with unconditional targets as having a target that implies a future peak. Additional countries that have targets that imply an emissions peak by 2030 but are contingent on receiving international support include Bhutan, Botswana, Ethiopia, Grenada and South Africa. The inclusion of these countries would increase the percent of global emissions covered by peaking countries from 60 to 61 percent in 2030.

While this trend is encouraging, it’s not enough. Research suggests that to have a likely chance of staying within the 2°C limit for the least cost, global GHG emissions need to peak by 2020 at the latest. The world’s ability to limit warming to 1.5 or 2˚C depends not only on the number of countries that have peaked over time, but also the global share of emissions represented by those countries; their emissions levels at peaking; the timing of peaking; and the rate of emissions reductions after peaking.

Countries must make and achieve commitments to peak their emissions as soon as possible, set their peaks at lower emissions levels, and commit to a significant rate of emissions decline after peaking.

Countries can make these commitments when communicating or updating their NDCs under the Paris Agreement in 2020. Doing so will help ensure that countries’ emission reduction commitments bring global emissions to the level needed to meet the Paris Agreement’s temperature goals and avoid the most dangerous impacts of climate change.