In the effort to reduce planned deforestation, such as in concession areas or released forest estate areas, the government has issued a number of regulations, such as the Presidential Instruction concerning the Termination of New Permits for Land Clearance on Primary Natural Forests and Peatlands and the Presidential Instruction concerning the Postponement and Evaluation of Palm Oil Licensing. This step must be duly appreciated. However, those regulations may just be meaningless if the Government does not keep its eye on unplanned deforestation from illegal logging and forest encroachment.

Such concern is reasonable as data from the Global Forest Watch shows that deforestation outside concession areas contributed to 45% of the total national deforestation during 2000-2015. This article will present field study results and show how unplanned deforestation happens and its potential solution.

A field study conducted in 2017-2019 in Bukit Suligi, Riau Province, describes the area as a water reservoir for three major rivers in Riau, namely Siak, Rokan and Kampar Rivers, as well as a corridor area for movement of a number of protected species at the Bukit Barisan mountain range.

Data from the Global Forest Watch further shows how massive the deforestation scale in Bukit Suligi was throughout the period of 1998-2000. The rate of deforestation increased significantly during that two decades. 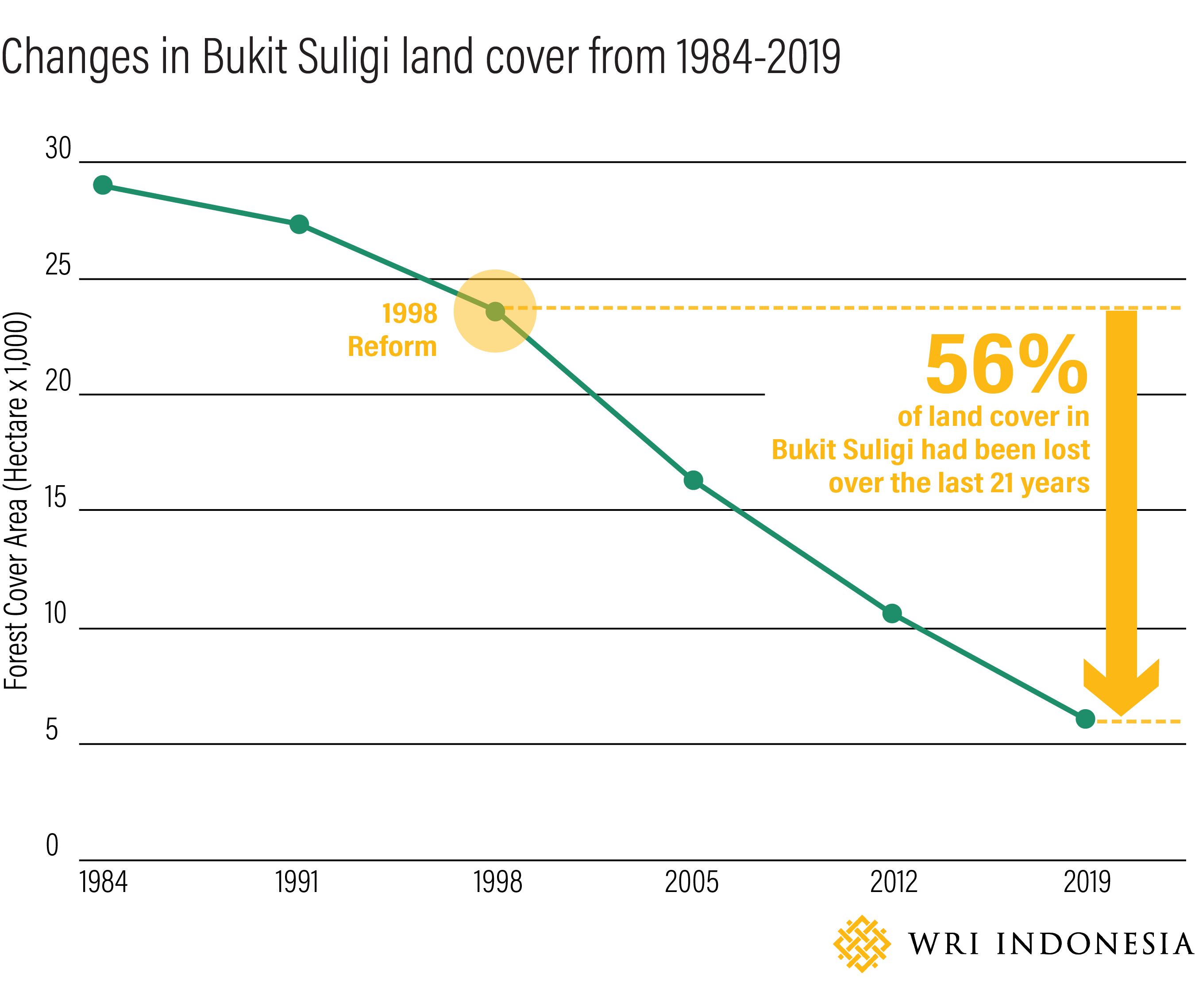 First, the absence of forest management at the local level.

Social data from the Forest Management Unit (Kesatuan Pengelolaan Hutan/KPH) of Suligi Batu Gajah in 2018 shows that Bukit Suligi was once a customary land. This status changed after the Government of the Republic of Indonesia was established and took over the land control following the mandate under the Basic Forestry Law of 1967. Slowly but surely, the area of customary lands decreased and people’s access to resources in the forest was limited.

Second, agricultural land deficit and the tendency of extensification

The locals originally relied on agriculture and rubber plantation for their livelihood. In the 1990s, along with the rise of forest exploitation, logging became an alternative source livelihood, offering bigger and faster cash. This pattern eventually changed as rubber price fluctuated while the potential of wood product gradually decreased. Slowly, people turned from rubber to palm oil, which they considered more practical and, in terms of price, more stable. But, since they were still lacking in cultivating skill, production from their palm oil plantation remained below 14.8 ton/ha/year, lower than that of private plantations (20-25 ton/ha/year). This gave rise to the tendency for extensification, namely increasing the area of the land for better income.

Problems arise once this extensification practice faces land availability. Lands that are outside the Forest Area, with no Land-Cultivation Permit and undeveloped are then prone to be utilized by these people. Results of a spatial analysis show how agricultural land deficit occurs in 16 villages (of the 23 villages in Bukit Suligi). Only 63% of the residents own an adequate area of land under the assumption that the agricultural land ownership is 2.75 hectare per family (transmigration standard). 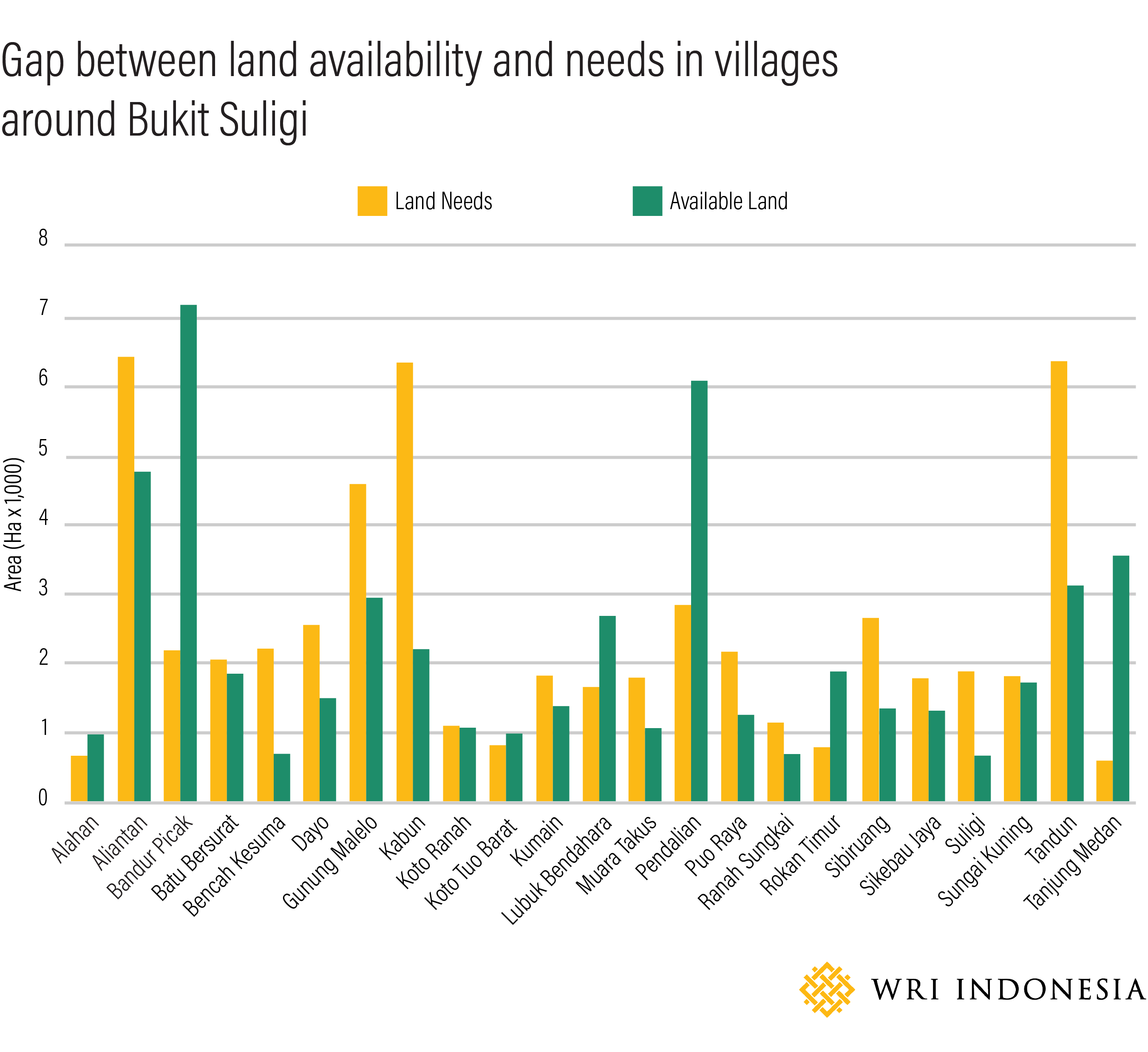 From the analysis, we recommend two fundamental aspects in tackling unplanned deforestation:

First, revitalization of forest management institutions at the local level.

Law No. 41/1999 concerning Forestry has mandated the establishment of KPH as a forest management institution at the local level. Due to many limitations, the proper establishment of KPH in Indonesia still requires more time. In Bukit Suligi, the KPH was only established in 2017 when the encroachment problem had grown very complex.

In tackling deforestation, a strong forest management institution at the local level is absolutely necessary. This means that KPH must be accepted by all stakeholders and must function well in regards of land exploitation and law enforcement.

In order to tackle the deficit of community managed land, the government through KPH must prioritize the regulation of people’s access to forest resources through participatory and democratic processes. Some existing schemes including land reform, resolution of tenure issues over state forestlands, social forestry, customary forest and one map policy need further commitment to ensure their effectiveness at the local level. These schemes have in particular allowed people to continue their activities under a sustainable and controlled forest-based management system.

In conclusion, to tackle deforestation, communities must be empowered so they can manage natural resources effectively. Agroforestry practices when based on the local wisdom can become a solution that integrates forest area restoration efforts with the protection of local communities’ economic sources.