Indonesia brought its deforestation rate down for the second year in a row in 2018 after experiencing record highs. This downward trend was bright spot for the world’s forests: Tropical forests around the world lost 12 million hectares of trees in 2018 alone, an area of land the size of Belgium.

However, with Indonesia’s annual fire season beginning and El Niño promising fire-prone conditions, the country’s forest protection policies will be put to the test. The dry season in Indonesia runs between April and October, but July typically marks the beginning of the most intense fires. Here are a few things to know as Indonesia enters its fires season this year:

How have fires impacted Indonesia in the past?

Indonesia’s fires have been increasing in frequency and intensity since the 1990s. Particularly bad years used to be an anomaly but have recently become a regular occurrence as large-scale agriculture has expanded across the islands. 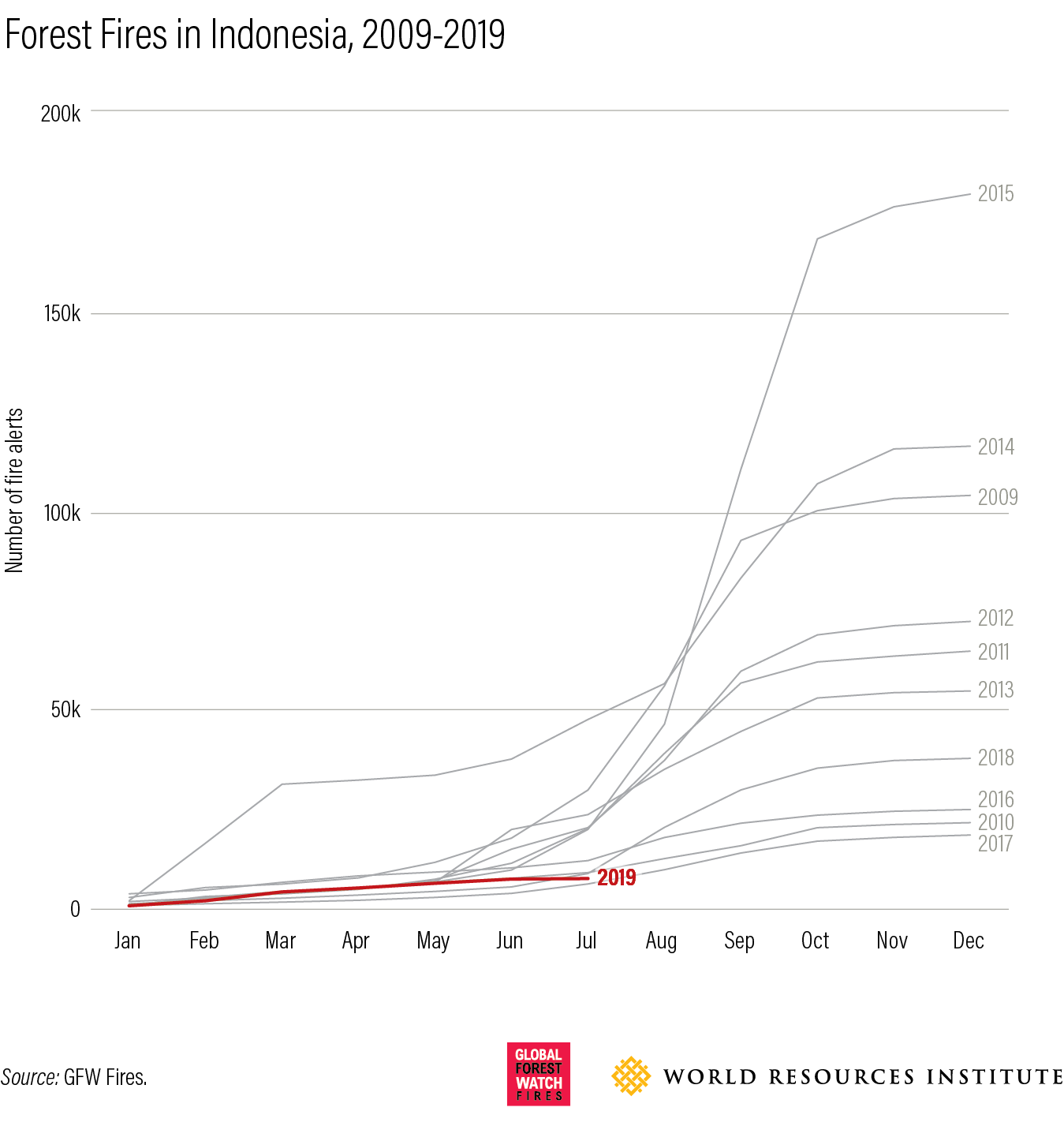 The worst fire season in the last 20 years occurred in 2015. The Global Forest Watch Fires (GFW Fires) platform detected nearly 130,000 fire alerts, more than 500,000 people had to seek medical attention due to the haze and smog, and 24 people died. Most of the fires were burning on carbon-rich peatlands; the carbon released tripled the country’s total annual emissions.

The majority of wildfires in Indonesia are set illegally to clear land for rubber, oil palm and other valuable commodities. These unsanctioned fires can quickly grow out of control. Since 2015, Indonesia has been working to prevent another fire emergency by implementing policies to halt agricultural burning and protect valuable forests and peatlands.

Can we expect many forest fires in Indonesia this year?

This year marks the return of the El Niño weather phenomenon. Although meteorologists do not expect this year’s El Niño to be as strong as the one in 2015, the weakening and reversal of wind patterns over the Pacific Ocean will lead to a high-pressure system over Southeast Asia. The system could bring with it drier, hotter weather.

Prolonged drought could dry out vegetation, providing highly combustible fuel for fires, allowing them to spread faster and further. Dry leaves in tree crowns enable fires to spread through the canopy; dry materials in the undergrowth increase the threat of igniting flammable peat layers within the soil.

GFW Fires alerts have detected just over 7,200 fires in Indonesia since the start of the year. This is compared to the nearly 19,600 by this point in 2015. Fire counts throughout 2019 have been low compared to the country average for the first half of the year. 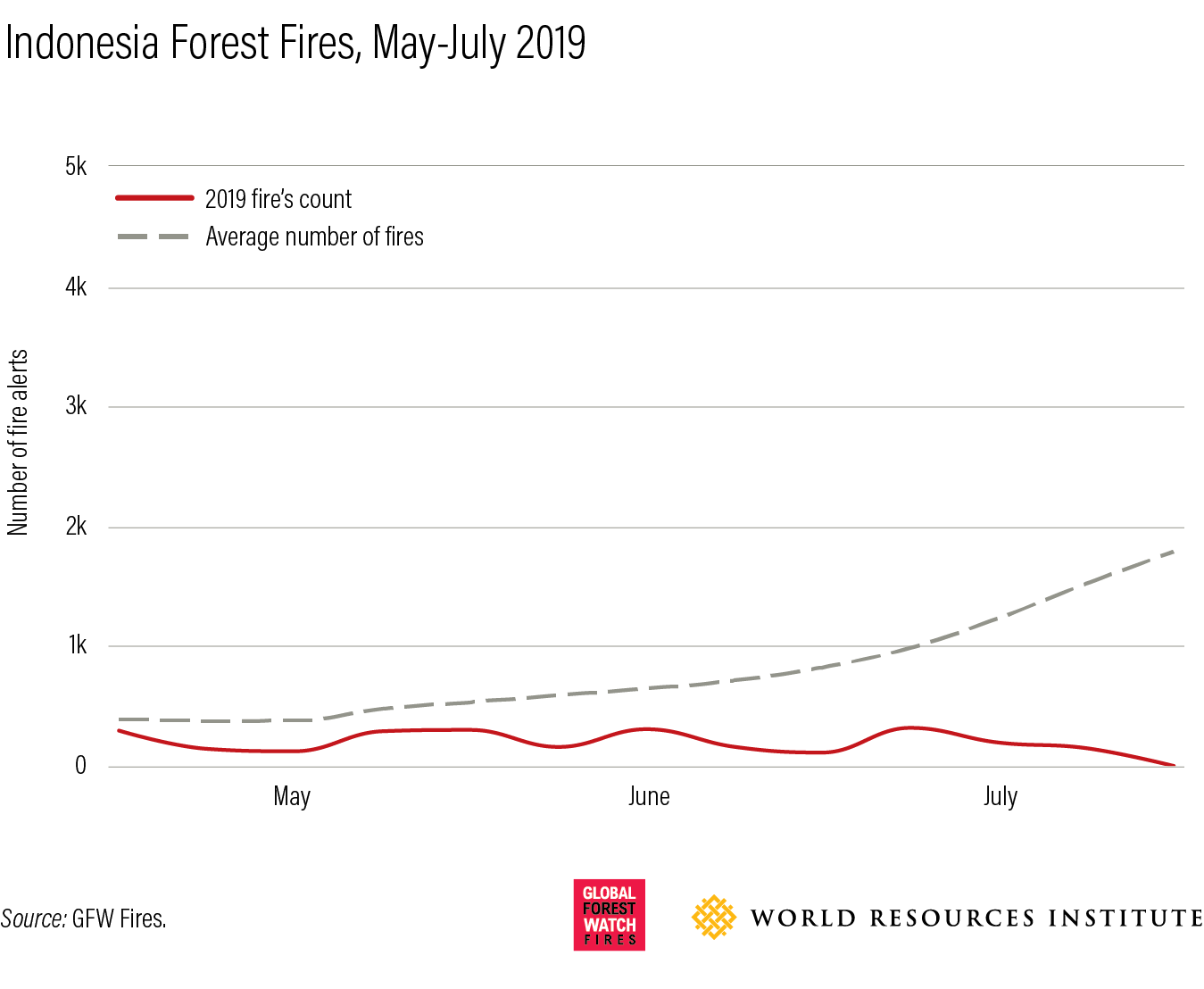 While this bodes well, the most intense months for fires are still yet to come. Additionally, the recent reduction in fires could have been in part due to heavy investment in fire prevention leading up to the 2018 Asian Games, the largest multi-sport event after the Olympics. With this uncertainty, it will be critical to watch for large spikes over the next few months.

What policies does Indonesia have to prevent further deforestation?

Indonesia’s government enacted key policy changes in response to the 2015 fires to avoid another emergency of its magnitude.

In September of 2018, Indonesian president Joko Widodo implemented a moratorium on new palm oil development and mandated the review of all existing licenses. The goal with this ban was to minimize further expansion of palm plantations, many of which are already encroaching on critical forest habitats.

In addition, Indonesia has already had a moratorium in place since 2011 to prevent clearing in primary forest and peatlands. While the original forest and peatland moratorium was supposed to last only two years, Widodo has extended it three times. It is up for renewal again in July, and the current administration is likely to install it permanently, according to Environment and Forestry Minister Siti Nurbaya Bakar. If the moratorium is approved by the president, it could significantly reduce the conversion of primary forests and peatland into fire-prone plantations.

On top of these policies, additional legislation has enforced better management of peatlands. Peatlands are often drained to make way for agriculture; the remaining soils are highly flammable when dried. Restoration efforts have brought water back to degraded peatlands, which should help reduce fires.

Keeping a close eye on fire and deforestation alerts in the 2019 season will be a good indicator of the effectiveness of policies enacted since 2015, but it’s not the only one. The price of crude palm oil has been on a downward trend for the past eight years, driven by an oversupply to its lowest point at the end of 2018. Higher prices tend to drive agricultural expansion, so the true test of government and industry commitments will come when palm oil price bounces back and economic pressures coincide with another hot, dry El Niño year.

What does fires season mean for Indonesia’s climate goals?

Not only is a reduction in deforestation essential to protecting Indonesia’s biodiversity, it also helps mitigate the country’s carbon emissions. As a result of deforestation reductions in 2017 and 2018, Indonesia was awarded the first installment of REDD+ payments, a program that rewards developing nations that successfully reduce emissions by protecting their forests.

Indonesia’s government has committed to reducing emissions 29% by 2030. This goal will be unattainable if forest and peat fires continue to spike every few years. Peatlands store 20 times as much carbon as other soils, and daily emissions from the 2015 fires season surpassed that of the entire U.S. economy. Continuing the current downward trend in deforestation will be critical for Indonesia if the country is to meet its climate goals.

As the season begins to heat up, GFW will continue to provide daily information on emerging fires and track trends. Visit GFW Fires to view recent fire alerts and monitor Indonesia’s fires as they happen.