Land and forest fires in Indonesia are often linked to land clearing, especially for plantations. One of the most common narratives is that the fire is caused by farmers trying to expand their plantation for palm oil or other commodities.

Land burning practices still exist today. Still, we can’t ignore the fact that some farmers actually have some sense of responsibility and care about the environment. In this piece, I will take you through the story of the farmers who are striving for change in two districts in Riau.

Farmers in Rokan Hulu Learn the Ways to Extinguish Fire

The sun was scorching hot that day, but spirit was high among the farmers participating in the firefighting training. This training was part of the Occupational, Health and Safety (OHS) and Best Cultivation Practices training for palm oil smallholders in Rokan Hulu, a district in Riau directly bordering with West Sumatra and North Sumatra. That afternoon, we had representatives of the Regional Disaster Management Agency (BPBD) present to share their knowledge on fire prevention and mitigation practices. In this field training, farmers were reminded of the risk of fire, especially during the dry season, as well as the community’s role in preventing fires. BPBD shared the procedure on how to use fire extinguishers to put out small fires in a warehouse or even more extensive fires on vast lands. They had the chance to operate those equipment in a firefighting simulation. 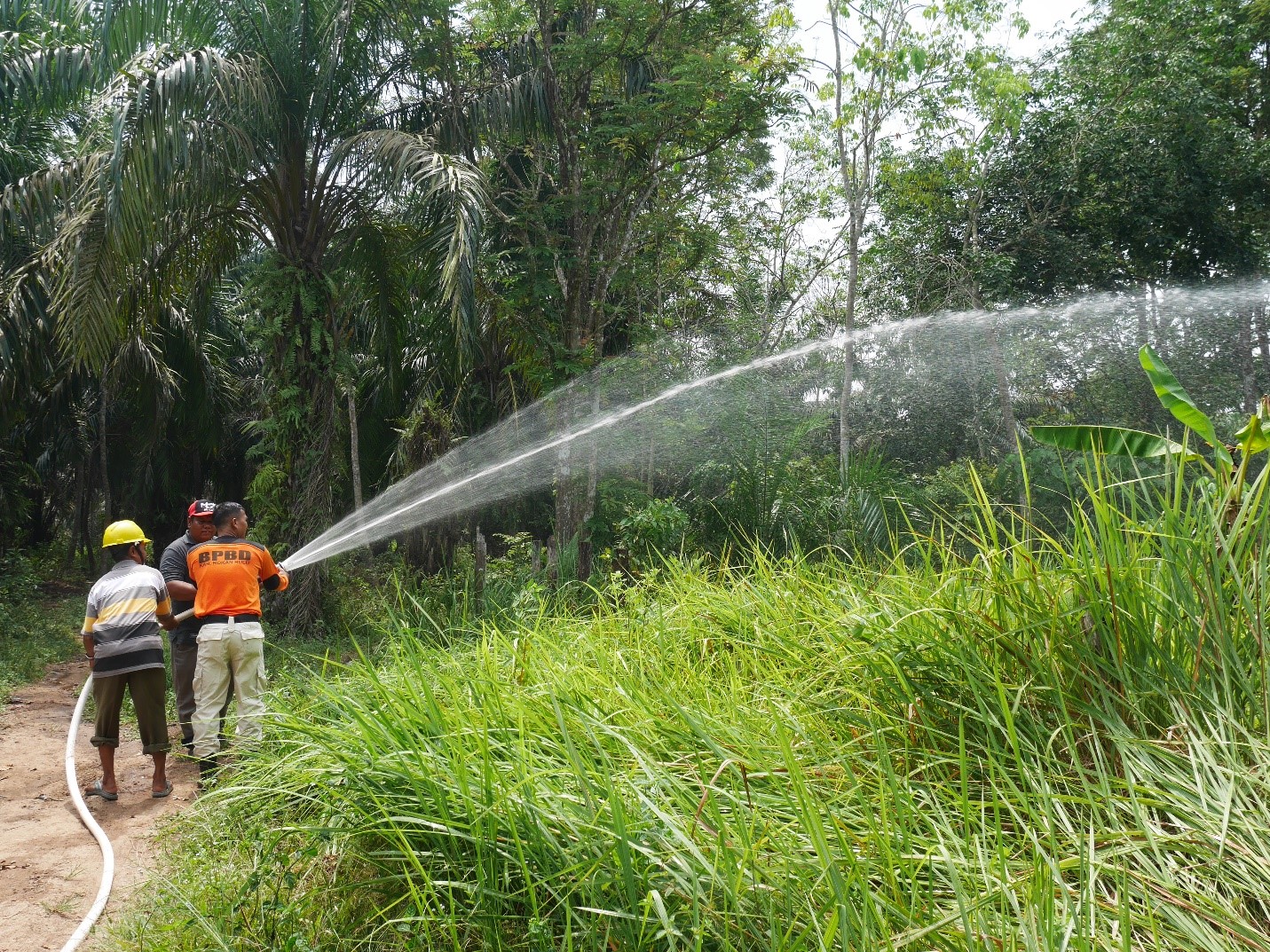 The farmers in Siak District, Riau, is one step ahead of the farmers in Rokan Hulu, who have just begun to make improvement through trainings and field practices. In Kotoringin Village, under the Beringin Jaya Cooperative, dozens of palm oil farmers have joined the Manggala Agni, a forest firefighting brigade. Some farmers also participate in Masyarakat Peduli Api (MPA), a community group who partners up with Manggala Agni in the fire control initiative. 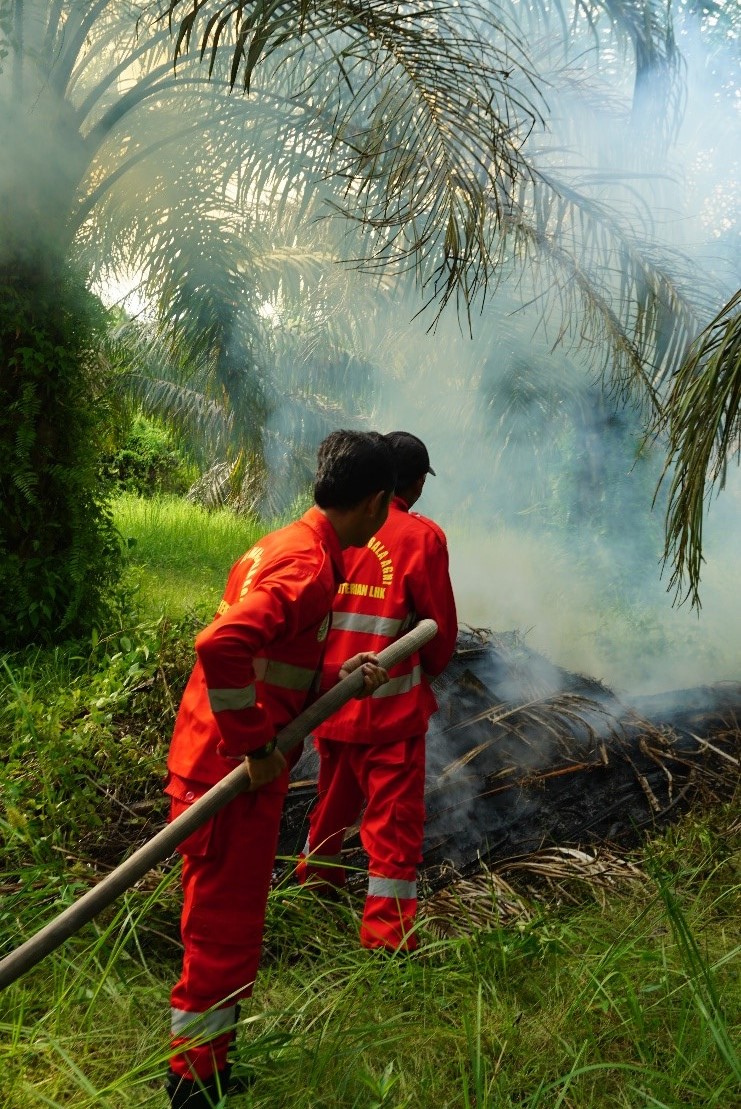 During the dry season where reports of hotspots emerge, farmers leave their work in the palm oil plantations behind to put out fire. They also periodically patrol several fire-prone locations in Siak. At the writing of this article, Mr. Amril, a palm oil farmer and a member of Manggala Agni, was working hard to put out fire that is estimated to hit 6 hectares of land in Suka Mulya Village, Dayun Sub-district, Siak, when this article was written. This process can last for days, even weeks.

Siak is prone to peat fire due to its vast peatland. Peat fire is difficult to extinguish, making the hazardous smoke worse. Thus, the community, especially palm oil farmers, plays a crucial role in protecting the land and preventing fires. Peat fire prevention is usually done by rewetting using canal blocks. This has been implemented by farmers under the Beringin Jaya Cooperative who built dozens of canal blocks for peatland rewetting.

Breaking the Vicious Circle of Fire and Climate Crisis

This year, severe fires have again occurred across the world, from the Amazon rainforest in Brazil, Bribie Island in Australia, California in the US, Canary Island in Spain to the Siberian Forest in Russia. Indonesia is no exception. Climate crisis and forest fires make up a reinforcing loop. When fire occurs, carbon-dioxide gas will be released into the atmosphere, increasing global temperatures and extreme weather. This in turn will increase the chance of fire. Over time, such relationship will be reinforced even more over time to a point where it cannot be controlled. 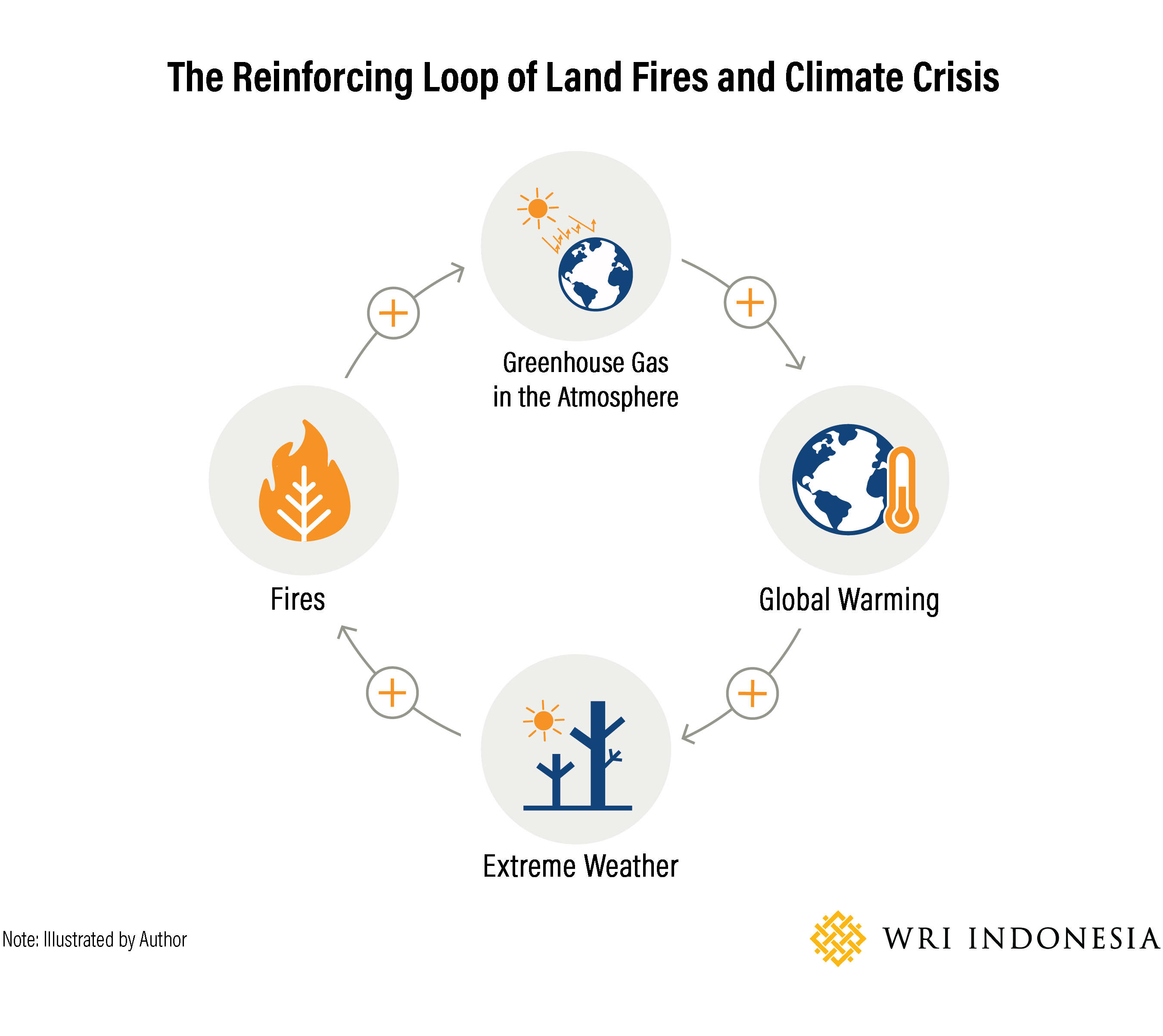 Translating solutions for global issues into pragmatic small-scale initiatives is at the core of WRI Indonesia’s operation. Global issues such as the vicious circle of climate crisis and fires need to be solved. The small changes made in Rukan Hulu and Siak are examples of how farmers play a significant role in breaking this vicious cycle. We strive to be a catalyst for these changes through small and personal actions. We interact directly with the farmers, listen to their problems and discuss the solutions together. Most of the big changes we have made stem from our interactions in palm oil plantations, under a durian tree or in small coffee stalls. Through this process, we gain understanding of how the grassroots see the high level. This is where we play the role of a catalyst.

Now is the time. As Greta, the young Swedish environmental activist who initiated Friday for Future, says, “we have to act as if our home is on fire, because it’s the actual truth.”