Home > Blog > A Trip of Reflection: To be Young and a Researcher. Why Not?

By Carolina Astri, a researcher for Wahana Riset Indonesia.

As usual, the dry season makes the sun unreasonable. It’s so hot! Yes, it was only reasonable for Dwiki and I to arrive at noon at Gema Port in Kampar Kiri Hulu District. It was neither too quiet nor too crowded. Several men were busy pressing the logs to the edge of the harbor. These logs seemed to be evidence of the bareness of the hill on the other side. Wait, don't believe it yet. This is a layman's analysis from someone who doesn't know the true conditions

Not much time to waste, our boat left the harbor, and went down the Subayang River towards the village of Gajah Bertalut. After an hour and a half, we arrived at our destination. Before our boat even reached the mouth of a river, Julius Lawalata, a WRI Indonesia field officer from the Riau office, started documenting our arrival with his camera from a distance.

We were fortunate to be able to engage with the WRI Indonesia team in Riau, who is conducting three-dimensional participatory mapping for the One Map Initiative at the Local Level. This was the first opportunity for me and Dwiki to go to the field as a young researcher from WRI Indonesia’s Wahana Riset program. 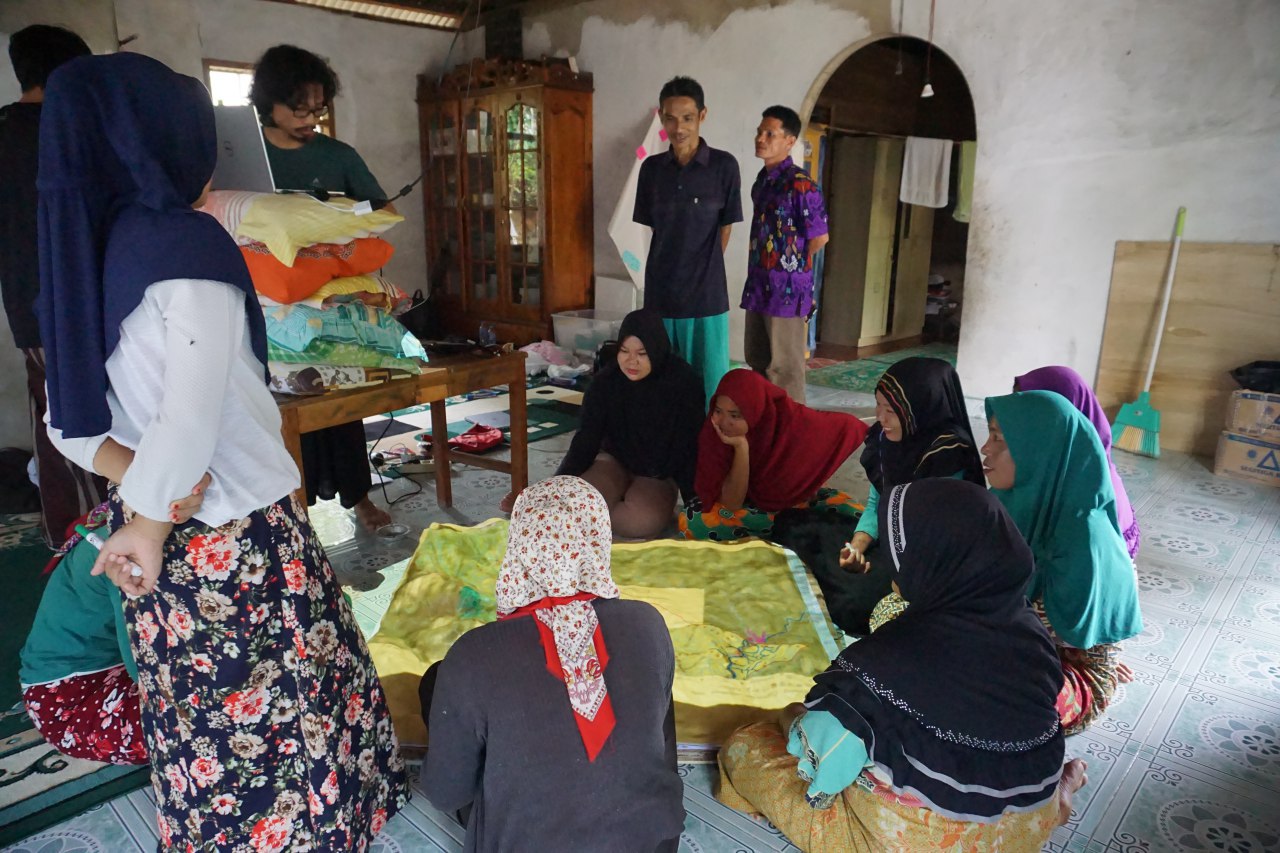 Talking about research, this was not the first time I went to a remote area for research. As a former graduate student of Anthropology at UGM, I did not graduate immediately because I was enjoying my research projects too much. This is not a good example to follow, but in fact, I really enjoyed leaving home for a month or half a year for research. So, when I was unexpectedly sent to the field for a week by Dean Affandi, I was ready. After all, I was used to do a researc for a period of months, let alone just seven days.

But what can be said, it is true that "we can do it because used to". So, in fact this writing more reflects my first experience as a young researcher Wahana Research Indonesia. I have to adapt to the new research pattern, which means making the best out of my time in the field. I only have a total of seven days. Including the trips back and forth.

My sense of optimism began to disappear as I faced the difficult reality of managing research in such a short time. To be honest, I had a lack of time to approach the community. I lost time sitting in the house of citizens, listening to them tell each other stories, even I do not understand what was being said. It was impossible for me to understand the local language in just one week. Also, people are usually more comfortable and open when we are already close and at least speaking the same language.

Time was also lost with my involvement in the daily activities of my host family. Usually, I can watch them work, help them, and ask questions without directly mentioning the topic of my research while I observe them. Or you could say, I had more time to approach the community. But, how do I do that now?

Long story short: It's challenging! Although I am used to do a research, it turns out I have to adapt to the new pattern. Inevitably, I think the work pattern adaptation is necessary.

At first I was very nervous, but then my nerves disappeared. I tried to dig up a lot of information from WRI friends in Riau. I started mapping anyone who could be informers and who I need to approach so as to not source from certain circles only. I am afraid that the lack of research time allows only information from the elite to be collected. 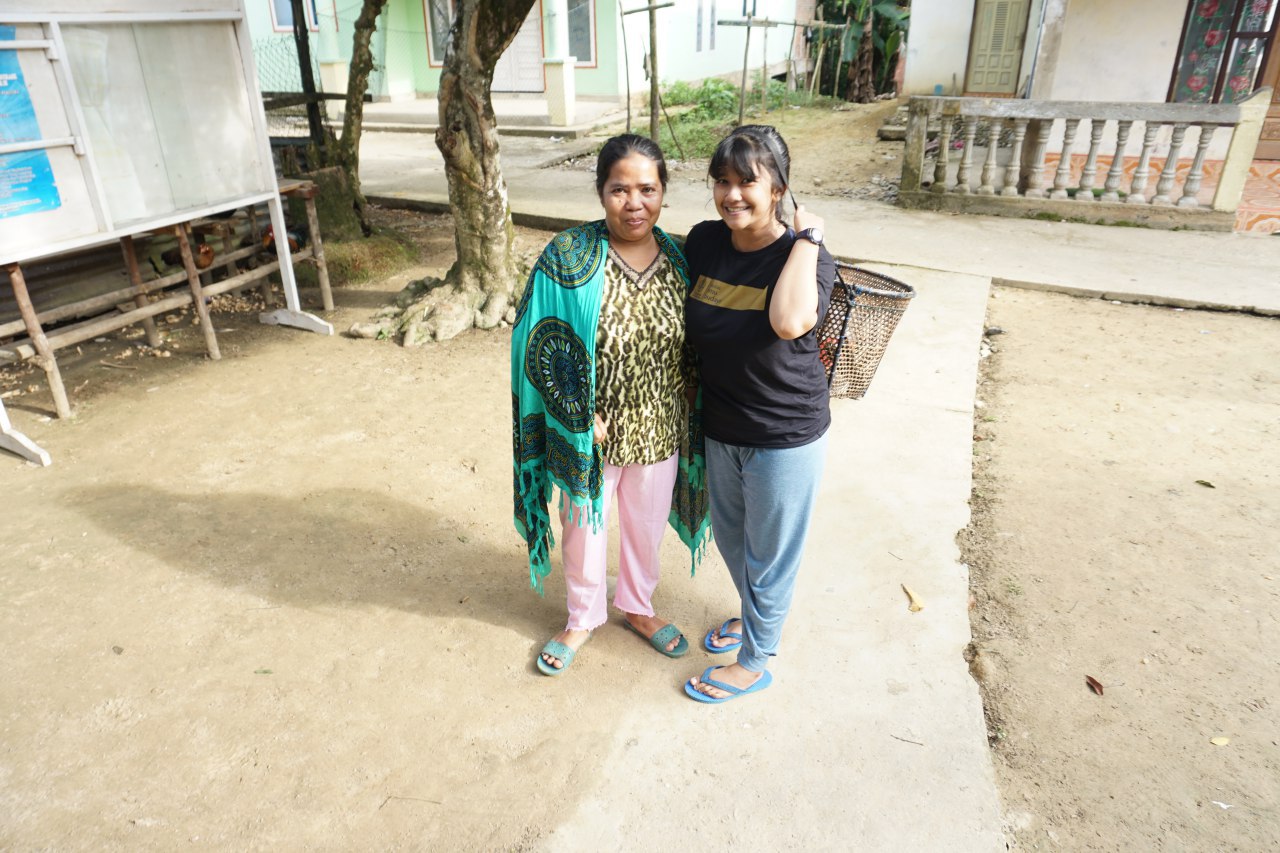 I am getting ready to go to the garden with Omak Silfiana, who worked as a rubber farmer in the village of Gajah Bertalut everyday.

Fortunately the previous team had provided me with a myriad of stories about the One Map process in Gajah Bertalut. I can also maximize the time on targets that have not been looked at. Although, it cannot be denied that getting something holistic does not come instantly. Therefore, I also won't give up learning how to maximize my time and to consolidate my research strategy.

While still young, there is still plenty of time in the process of research with other colleagues from Wahana Riset. I also am able to get new perspectives from different educational backgrounds. This first experience was a learning one. I enjoy undergoing this process with Wahana Riset, which provides a space for young researchers to study with experts and with society. It won't feel right until you dive into the field. Lastly, see you again, Gajah Bertalut!