It was 4 o’clock in the morning and I was sitting in an airplane. All things were ready but myself. Can’t help but thinking “Where am I actually going? What am I going to do there?”. Yes, I was heading to Washington, DC to join an internship at the World Resources Institute’s (WRI) global office as part of the Indonesian Young-Thought Leaders on Environment 2017 program by WRI Indonesia. I didn’t know what to expect from this foreign place. The media once fed me with the depiction of this free country about how life was all easy there, the glaring cultural difference between the East and the West, and the current political instability which made me a bit anxious visiting the country, especially as a woman wearing hijab. I was both excited and worried at the same time.

Thankfully, the media proved me wrong. The kindness and open-mindedness of the people in Washington melted away all my worries. Overall, it was an incredible, eye-opening journey that I had in the United States. It was a journey where I once again found the spirit of Indonesia, on why we should never stop believing and contribute to this country.

People at the WRI office were incredibly nice and helpful. I was assigned to support the Food, Forest, and Water team. No wonder I heard a lot of ‘forest talk’ here. To my surprise, some of them had worked in Indonesia and they can even speak Bahasa Indonesia! I often heard them talking about Indonesia forests. I was suddenly struck by how little my knowledge was about my own country, my own forest.

I was also awed by the attention that everyone put in our country. As one of the countries with the richest rainforest biodiversity, it places Indonesia at the frontline of the climate change. Huge efforts are given by these people to protect Indonesia’s nature. When the international attention and efforts are directed towards us, how come we could be so ignorant of our own problem we're facing? This hit me hard. 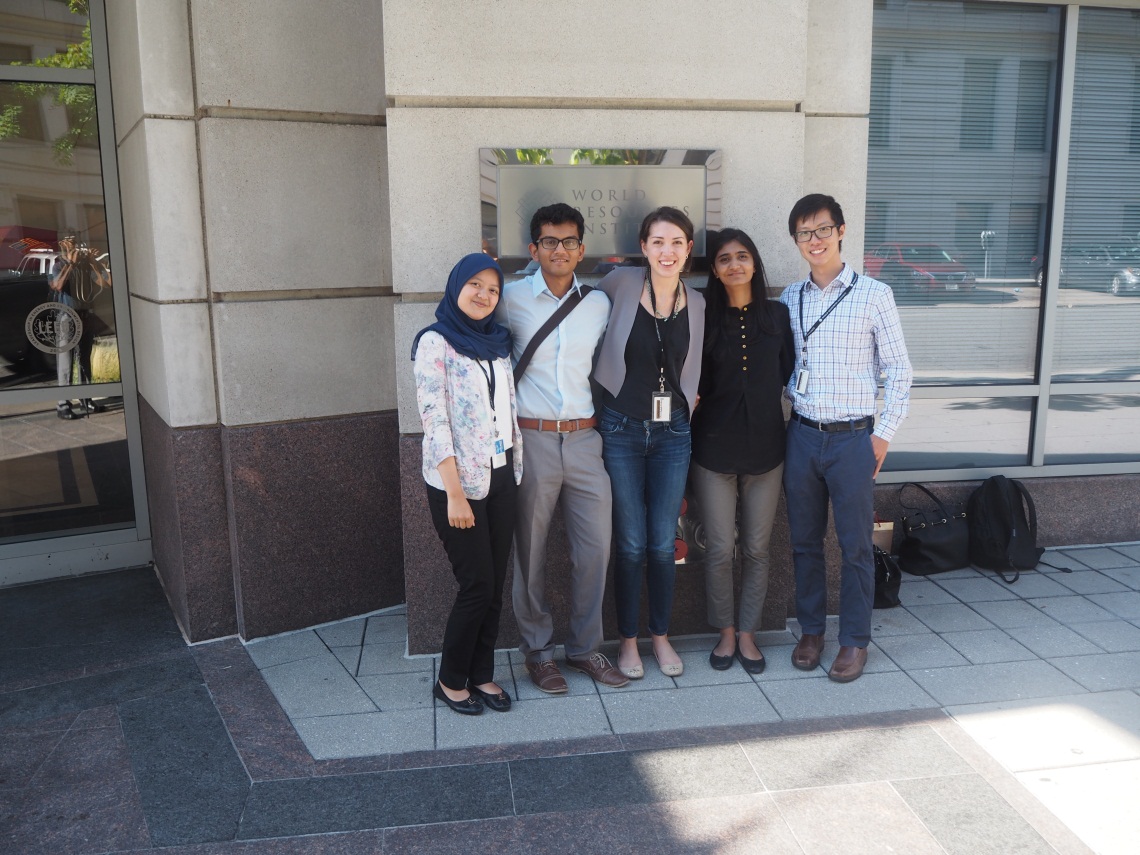 Since I did an internship in the summer, I got the chance to meet and make friends with all interns from various backgrounds. The summer internship program included various workshops on issues related to WRI’s programs such as Energy, Climate Change, Cities, and Forest. There was also a competition among the interns called Intern-a-Palooza, where 10 interns were chosen to present their work. WRI’s CEO, Andrew Steer, became one of the judges. We also often had “happy hours” where the interns hang out together after work.

I was often invited to various meetings at the office and I was astonished by how the interns are treated in this institution. WRI nurtures us to grow. The staff was really open to new aspirations and ideas. They listened to our ideas and valued our feedback. It made us feel truly appreciated. Perhaps it is because WRI was born and catalyzed by ideas. Ideas are the fuel to this institution. And the most important thing is, they turn them into actions!

Living the diverse life in the United States

Living here allows me to experience the ultimate diversity of the United States and be a part of this ‘melting pot’ of the world. I knew how diverse the United States (U.S.) is, but experiencing it myself felt different. Meeting people from many parts of the world and listening to their stories are among my favorite things during my time in the US. I realized that no matter who you are, where you came from, what your religion or race is, honestly, we're all just the same. We are human. Despite the differences that we have, we all still can share laugh and happiness together. And once we took this understanding to our deepest heart, we’d be able to tackle the racism, prejudice, and hatred, the roots of many problems in this world.

Having spent a month in the country has made me understand the attractiveness of living and working in the United States, but I could hardly wait to go home and start contributing to my country. Interning at WRI enabled me to see the world from a helicopter view, and I realized that every country is facing their own problems. And they all strive against it. Funny how it took me 10,166 miles away from home just to be reminded that there are still tons of things to be done in Indonesia.

Anindita Nur Annisa in front of The White House.

Just like the United States, every big nation was built by their people who believe in change and work relentlessly towards it. And now it’s our turn to believe and make that change. Because our home, Indonesia, is calling.