New satellite imagery reveals a rash of fires burning in what was once one of the world’s most biologically rich forests—Indonesia’s Tesso Nilo National Park.

The recent outbreak of fires began May 29, 2015, according to NASA fire alerts on the Global Forest Watch Fires (GFW Fires) platform, and alerts have have cropped up daily since then, with a total of 185 fires alerts. Of these, 47 of these have been high-confidence fire alerts, more likely to be associated with forest burning during land clearing for agriculture.

What’s more troubling is that these are just the latest fires to rip through the protected area, which is home to endangered Sumatran tigers and elephants, among other species. Despite legal designation as a protected area, the park actually has a lengthy history with agricultural encroachment and other threats.

Tesso Nilo was first established as a National Park in 2004. The boundaries were expanded in 2009, and the park is one of the last large areas of lowland tropical rainforest in Indonesia.

But encroachment into the park by thousands of settlers has been rampant. Since 2000, more than 47,000 hectares ( 116,000 acres) of tree cover has been cleared, making way for palm oil plantations and other development.

Fires are not a natural occurrence in Indonesian forests and rarely occur unless they are ignited by people. Although it is illegal to set fires, except for areas used for smallholder agriculture, burning is widely used across Riau Province in conjunction with the conversion of forests to palm oil or wood fiber plantations as a cheaper alternative to mechanical clearing. All fires within protected areas are illegal.

A major outbreak of fires in the park occurred during 2013. The illegal encroachment into the park and lack of enforcement of legal protection have been ongoing issues for years, and were even featured in the premiere of Showtime’s [Years of Living Dangerously series]http://yearsoflivingdangerously.com/), highlighting the role of deforestation in global climate change. Reports in the Indonesian press on July 3rd indicate that three individuals were arrested in connection with the recent fires in Tesso Nilo, yet active fires have continued burning through at least July 9th. 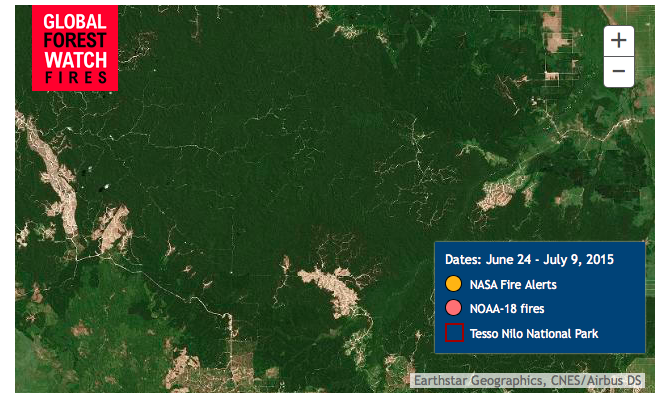 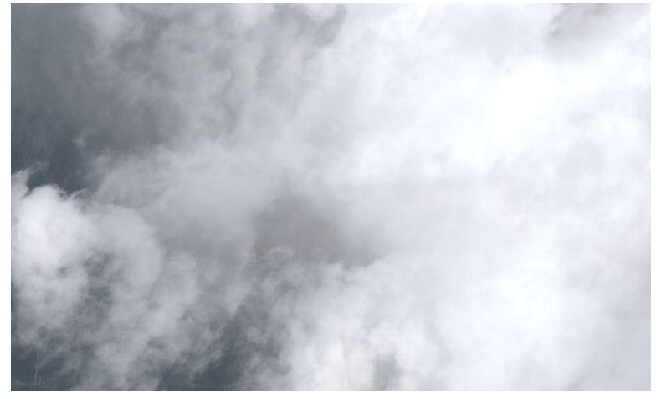 This July 5 image captures an active fire alongside extensive areas of cleared and converted forests within the boundaries of Tesso Nilo National Park, showing the wide extent of illegal encroachment of the protected area. Use the swipe tool to reveal the active burn beneath the smoke plume, made possible through the satellite’s short wave infrared (SWIR) sensor. On the SWIR image, healthy vegetation appears in red and burned areas in black; within the actively burning area, temperature is indicated in a range from cool blue to intense heat in bright red. (30cm resolution natural color image overlaid on false-color 7.5m SWIR image, both collected by Digital Globe’s Worldview-3 satellite on July 5, 2015)

Tesso Nilo is legally registered as a protected area, meaning that timber extraction and clearing of forest for agriculture are not allowed in the park. All national parks in Indonesia are doubly protected by the country’s recently renewed moratorium on new licenses to clear forest land. The fact that so much tree cover has been lost in recent years shows a lack of law enforcement.

What to Do Now?

The country also needs the relevant government agencies and law enforcement bodies to act in unison against illegal land burning. The UKP4 task force established in 2014, but later disbanded, played an important leadership role in curbing fires and bringing legal action against perpetrators. Creating a similar task force today would be an important step in demonstrating that combating fires and enforcing the forest moratorium is a priority for Indonesia’s new leadership.

The public too, can increasingly play a role. Visit the GFW Fires site to find out the latest on the fires in Tesso Nilo. Click on the “sign up for alerts” button in the upper right corner of the map to get automatic email or SMS notifications of fire alerts in specific areas.