Brazil and Indonesia, which have made significant efforts to reduce deforestation in recent years, both saw an uptick in tree cover loss in 2014, according to new data on Global Forest Watch from the University of Maryland and Google. Brazil’s rate of tree cover loss increased by more than 16 percent between 2013 and 2014, while Indonesia’s rose by 30 percent during the same time period, though the 3-year average changed less dramatically in both countries. Tree cover loss is the removal or death of trees, regardless of the cause and not accounting for regrowth and tree cover gain.

However, despite the uptick, new analysis shows that Brazil and Indonesia are accounting for less and less of the total proportion of tree cover loss in the tropics, as new hotspots emerge in Asia’s Mekong Basin, the Gran Chaco of South America, and West Africa and Madagascar. More than 62 percent of tropical tree cover loss in 2014 occurred in countries outside of Brazil and Indonesia, compared to 47 percent back in 2001 (read the full analysis here).

Still, Brazil and Indonesia remain important for their size and as major laboratories of forest policy. Below, we delve deeper into the data.

There is no shortage of studies and news stories focused on the historically high rates of deforestation in Indonesia and Brazil. These two countries accounted for more than a third of tropical tree cover in 2000, and represented nearly half of all tropical tree cover loss between 2001 and 2014.

Indonesia and Brazil are also the sixth- and seventh-highest greenhouse gas-emitting countries in the world. Land use change is the largest contributor to emissions in both countries, causing nearly 45 percent of total emissions in Brazil and 55 percent in Indonesia. Tackling global climate change will require a concerted effort to dramatically slow deforestation in these regions. 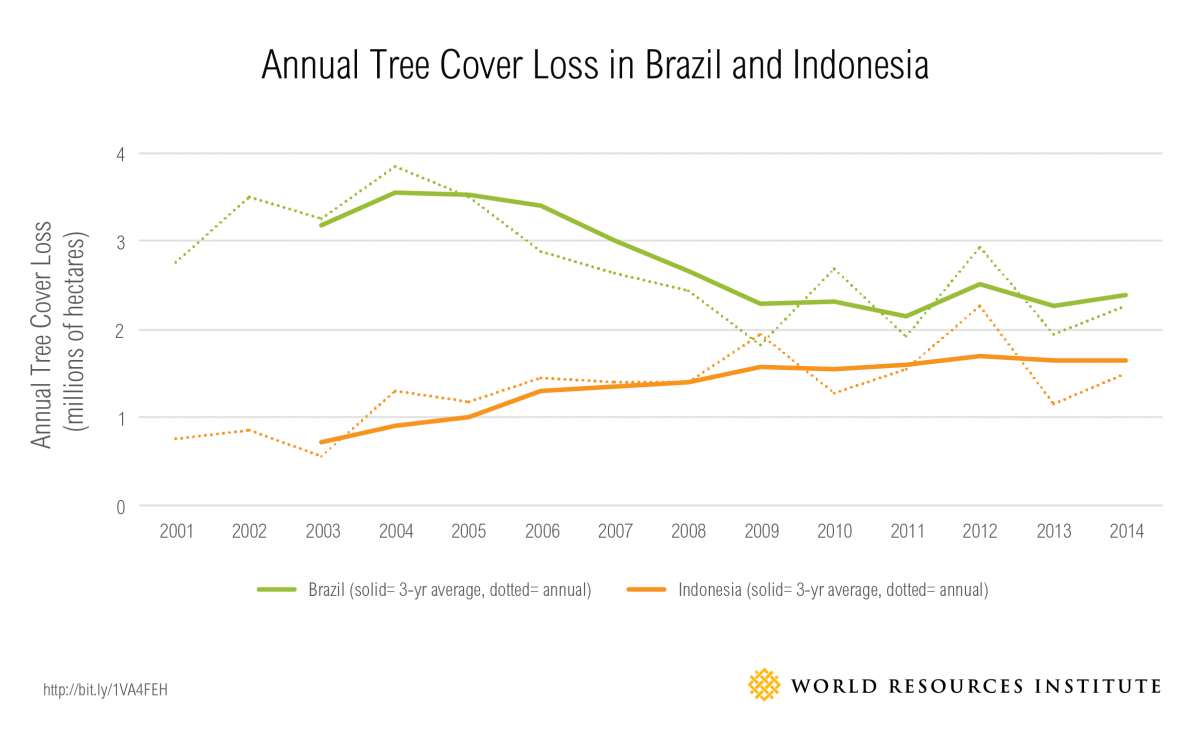 Note: We use a 3-year moving average in our charts to smooth out uncertainty in the year-to-year data. Read more here.

Zooming in on Brazil

Brazil has been applauded for the major decline in deforestation in the Brazilian Amazon since 2004, attributed to better environmental governance, including major efforts on law enforcement and monitoring, and supply chain interventions for beef and soy. According to the UMD / Google data, at its 2004 peak, Brazil’s rate of tree cover loss stood at 3.8 million hectares (9.4 million acres) per year, an area the size of the Netherlands. Since then, loss has slowed considerably, with the three-year average trend hovering around 2.3 million hectares (5.6 million acres) per year since 2009. The recent uptick in tree cover loss in this data set supports the findings of the DETER and SAD monitoring systems, run by the Brazilian government and the NGO Imazon, respectively, which also indicate that deforestation increased in the Amazon in 2014.

Interestingly, our data also indicates that tree cover loss outside the Brazilian Amazon is accounting for more and more of the country’s total loss (the Amazon is one of Brazil’s several forest biomes, and by far the largest). From 2001-2007, tree cover loss within the Caatinga, Pantanal, Atlantic Forest, Pampa and Cerrado biomes of Brazil averaged about 36 percent of Brazil’s loss. Between 2008 and 2014, these areas constituted 46 percent of national loss. It’s unclear if some of this trend may be due to increased harvesting in tree plantations within the Caatinga, Pantanal, Atlantic Forest, Pampa and Cerrado, where extensive areas of natural forests and grasslands have been historically replaced with tree plantations for wood and fiber production. Further investigation will be needed to determine how much tree cover loss in these areas is happening within natural forests.

Detecting tree cover change in the Amazon is also becoming more difficult. A recent study showed that forest clearings of 25 hectares (61 acres) or smaller are becoming more common, possibly as an attempt to avoid detection by satellite. All the same, data released by Imazon a few days ago showed that tree cover loss alerts are continuing to increase in 2015. 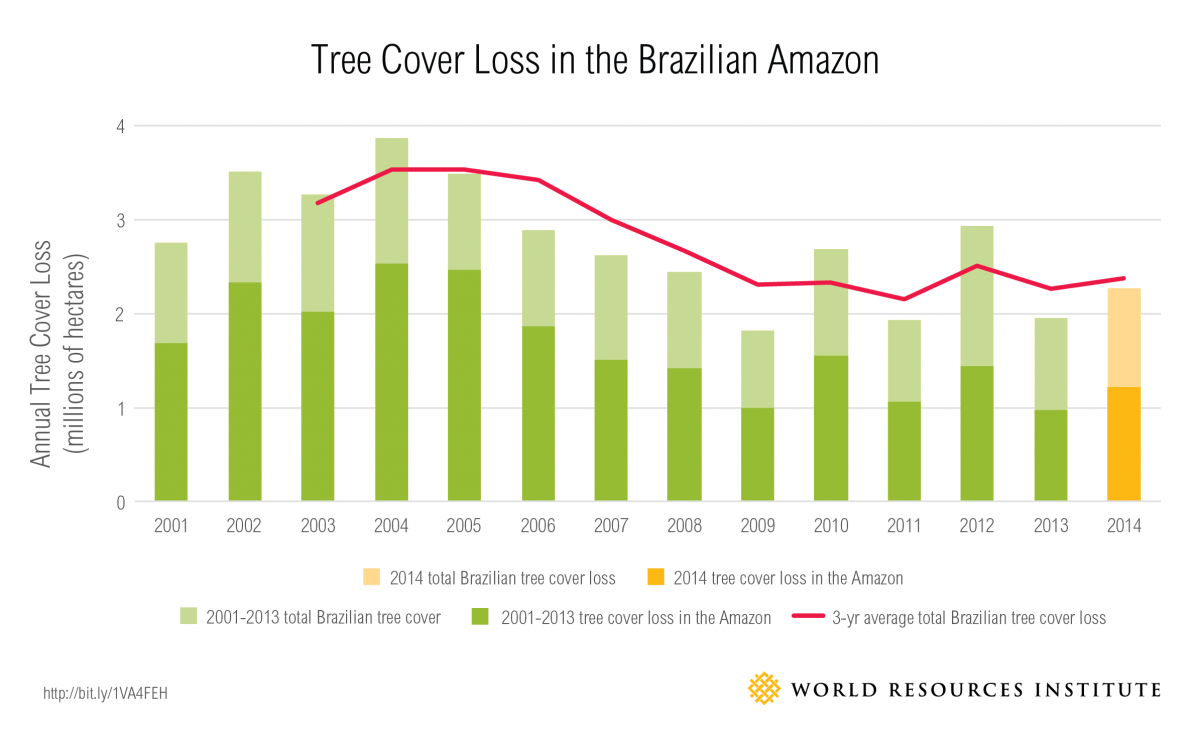 Zooming in on Indonesia

In contrast to the generally declining tree cover loss trend in Brazil, Indonesia’s tree cover loss trends steadily increased between 2001 and 2012. After we reported a drop in tree cover loss in 2013, conservationists and government officials alike were hopeful that efforts to reduce deforestation were paying off. The Indonesian government has been making strides to improve forest policy, recently renewing a moratorium that prohibits new licenses to clear forests in certain primary forests and peatlands. More corporations have committed not to clear primary forests, and new research suggests protecting forests is economically feasible. 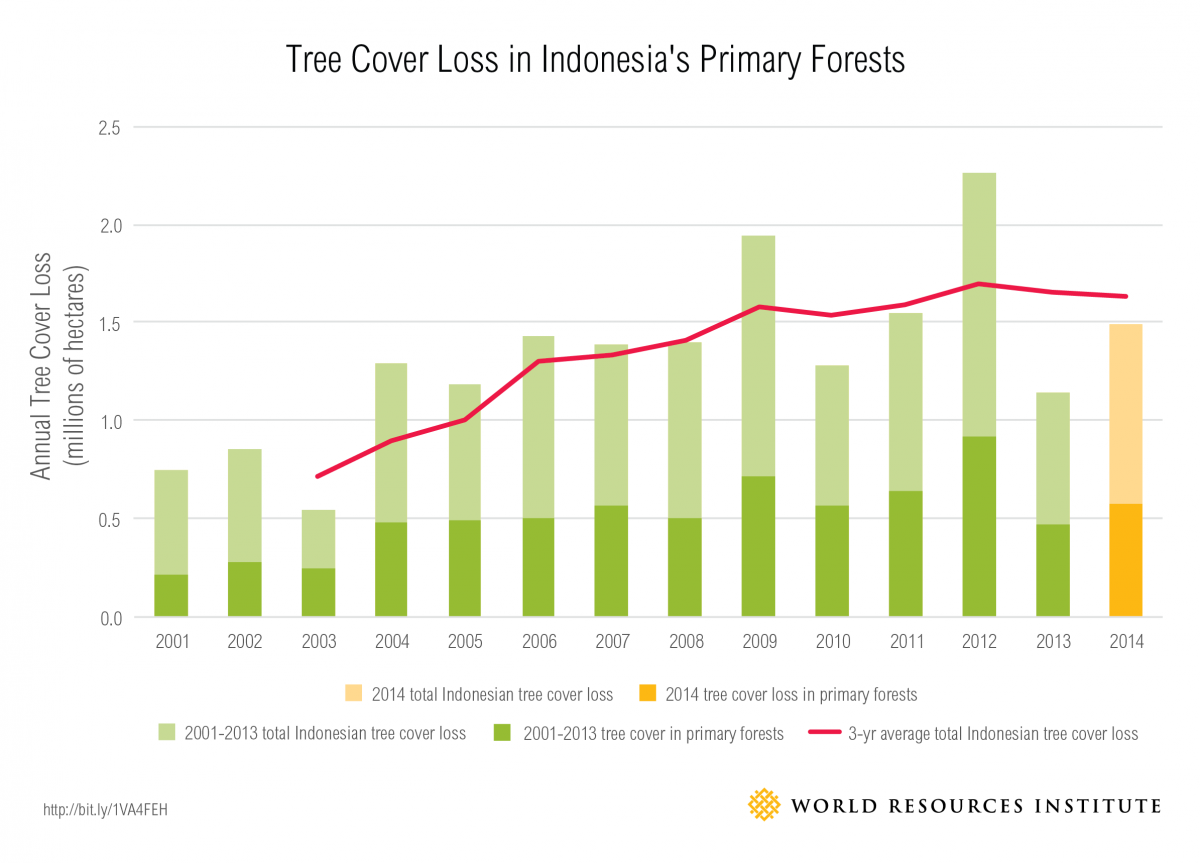 What Will the Future Hold?

While the new data for 2014 gives us important information about the dynamics of tree cover change around the world, it is important to remember that one year of data alone cannot define a trend. The new 2014 maps suggest that achieving consistent reductions in the rate of tree cover loss in Indonesia and Brazil remains elusive. Time will tell whether these countries can make up for lost time – and lost forests.