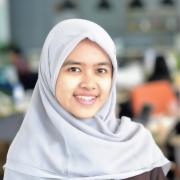 Anindita Prabawati (Anin) is a researcher of Wahana Riset Indonesia program at WRI Indonesia. She helps One Map Initiative Team in developing tools and modules in relation with Conflict Transformation.

Anin had conducted a research about paddy bacteria in 2015-2016. She had involved in Wukir Mahendra Expedition in 2015, took a part of Socio-cultural in it relation with Ethnobotany.

Before joining WRI, Anin studied about literature, humanity and journalism in Bilik Literasi. Her essays were published in a book titled “Suguhan (Hampir) Serius”.

Anin got her B.Sc. from Biology Department. She passionate in studying Biodiversity and Bioanthropology. She loves reading, writing and travelling. In her spare time, she enjoys drawing and coloring.