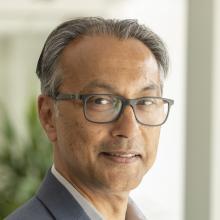 Aniruddha (Ani) Dasgupta is President and CEO of WRI, where he works to advance the institute’s global vision to improve the lives of all people and ensure that nature can thrive.

Dasgupta is a widely-recognized leader in the areas of sustainable cities, urban design and poverty alleviation. He developed his expertise in positions ranging from at nonprofits in India to the World Bank, where he developed the Bank’s first Knowledge strategy.

He took the helm at WRI after seven years as Global Director of WRI Ross Center for Sustainable Cities, which is dedicated to shaping a future where cities work better for all people. Under his leadership, the Cities program grew to 400 staff members working in 150 cities, with a reach to more than 400 cities in total. He has established large, multi-stakeholder partnerships with city, national and corporate leaders around the world. Ani has helped create and lead innovative initiatives, including the New Urban Mobility alliance (NUMO) and the Coalition for Urban Transitions, as well as a new line of work around urban air quality. He also brought an increased focus on people and equity to the program.

Prior to joining WRI in 2014, Dasgupta served as Director of Knowledge and Learning at the World Bank, where he provided leadership in the Bank’s knowledge services for development. He also worked extensively in the World Bank’s Jakarta office as head of infrastructure, where he was deeply engaged in post-2004 tsunami reconstruction in Aceh, as an advisor to the government on housing and infrastructure reconstruction and as the head of the Bank’s housing and infrastructure team. His work at the Bank took him throughout Asia and Eastern Europe as a technical expert centered on community-based development, urban environment, disaster management, solid waste management, water supply and sanitation.

Originally from Delhi, India, Dasgupta developed an interest early in life in buildings and design. He earned a bachelor’s degree in architecture, with an emphasis on low-income housing, at the School of Planning and Architecture in India. Later, he was accepted at a special program at Massachusetts Institute of Technology (MIT) focused on affordable housing. Dasgupta holds master's degrees from MIT in city planning and architecture.

He lives in Washington, DC with his wife and has two sons.