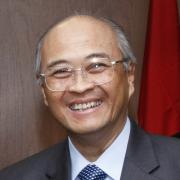 Dr. Ir. Kuntoro Mangkusubroto MSc. is the Head of President’s Delivery Unit for Development Monitoring and Oversight (UKP-PPP) from 2010 to 2014. Prior to this assignment, Dr. Mangkusubroto was the Head of Rehabilitation and Reconstruction Agency (BRR) Aceh-Nias from 2005 to 2009.

Dr. Mangkusubroto also played significant role in the Indonesian energy and natural resources sector, where he was the Minister for Mining and Energy (1998- 1999) and CEO of PLN (2000-2001), PTBA (state coal mining company, 1988- 1989), and Timah (state tin mining company, 1989-1993). His restructuring effort at Timah has managed to turnaround the ailing company to a point where it became the benchmark for global tin price.

Dr. Mangkusubroto graduated from Bandung Institute of Technology with a PhD degree and received his Master's degree in Engineering from Stanford University.

Dr. Mangkusubroto is also the Chairman of School Governing Council, School of Business and Management – Institut Teknologi Bandung (SBM-ITB), a business school he co-founded in 2003 and has since become its member of Decision Making and Strategic Negotiation expertise group. He also sits in various advisory boards, among others at the Center for Strategic Leadership, National Research Council (DRN) and Global Rescue Network.