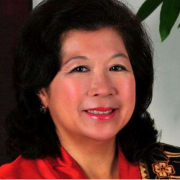 Dr. Mari Elka Pangestu, Distinguished Board Member of the World Resource Institute Indonesia, most recently served as Indonesia’s Minister of Tourism and Creative Economy (2011 – 2014). As Minister of Tourism and Creative Economy, apart from the tourism portfolio, she created a strategy and institutional structure to foster the continued growth of Indonesia’s large tourism industry, and support the creative economy in both its traditional and high-tech sectors. Before that, she was Minister of Trade of Indonesia (2004 -2011). As Minister of Trade she led all the international trade negotiations and cooperation for Indonesia. Before being appointed as Minister of Trade in 2004 she was a leading staff member of the Centre for Strategic and International Studies (CSIS) in Jakarta and active over a long period in various trade forums. She is regarded as one of the most well-known economic experts on trade issues in Indonesia. She has also served as a lecturer in the University of Indonesia and as co-coordinator of the Task Force on Poverty and Development for the United Nations Millennium Project. She currently serves on the Leadership Council of the UN Sustainable Development Solutions Network (SDSN), Equal Access Initiative, ANU and member of Women International Council on Women’s Business Leadership.

She obtained her Bachelor’s and Master’s degrees from the Australian National University, and her Doctorate in economics from the University of California at Davis (1986). She is currently a professor of international economics at University of Indonesia, is a board member of Astra International and Bank BTPN. She has acquired vast experience over 25 years in academia, second-track processes, international organizations and government, working in areas related to international trade and investment in the multilateral, regional, and domestic setting. She is widely respected both in Indonesia and overseas. She is known as an effective public speaker and minister. As a professional economist, her work is widely published in the Indonesian and international journals and media. She serves on the Board of the Bulletin of Indonesian Economic Studies (produced by the Indonesia Project at the Australian National University).

She worked with Jeffrey Sach on the UN Secretary General Millennium Development Goals (MDGs) Review (2003-2005), was the WTO Group-33 Chairperson (2005-2011), nominated as a candidate for the WTO Director General (2013), provided leadership (1987 - 2003) in regional cooperation for Asia Pacific Cooperation Council (APEC) and ASEAN. In 2013, President Susilo Bambang Yudhoyono awarded Dr. Pangestu with Bintang Mahaputera Adipradana (Adipradana Mahaputera Star Honor), a tribute to those who rendered great services to the nation and the country.