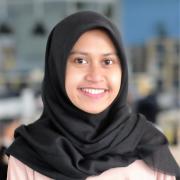 Indira (Indi) is a researcher of Wahana Riset Indonesia program at WRI Indonesia. She helps in the research about illegal logging and forest conservation. She holds B.Sc in Biology and really passionate in Zoology.

She loves exploring the beauty of Indonesia, writing blog, spending time with her cats, and running a social project named Buku Anak Indonesia to raise literacy interest of children in rural areas.