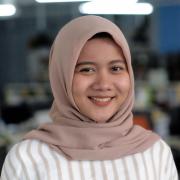 Nadia is a Researcher under ‘Wahana Riset Indonesia’ program in WRI Indonesia. She mainly works on research in Peatland Restoration, focusing in financial and economic analysis.

Prior to joining WRI Indonesia, she worked as a junior researcher in SurveyMETER Indonesia. She involved in several national scale socio-economics surveys as a data manager and analyst. She also supported field studies preparation and development as well as co-authored for working papers. Previously, Nadia has worked as a research assistant for various research projects on public finance and economic policy in Universitas Gadjah Mada (UGM).

Nadia holds a bachelor’s degree in Economics from UGM, Indonesia. She spent a semester to study economics and behavioral finance in University of Groningen, The Netherlands within Erasmus+ program. In her spare time, she enjoys travelling, reading, and painting.