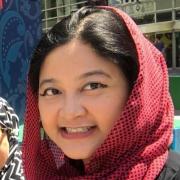 Stania Puspawardhani is the Partnership Lead at WRI, overseeing program to catalyze low-carbon development plan in rainforest areas. She has been an environmentalist since she was young, having represented Indonesia to UNEP Global Youth Forum in San Francisco during high school.

A former diplomat, she served as protocol officer to the Minister for Foreign Affairs and facilitated bilateral relations with US, Canada, Mexico, Cuba, Panama, Guatemala, Nicaragua, Costa Rica, El Salvador, Belize as Assistant Deputy Director for North and Central America.

She earned BSc in Biology from Bandung Institute of Technology and MSc in American Studies from University of Indonesia with grant research in Berkeley, California. She's a Presidential Speechwriting Fellow who received training at Georgetown University.