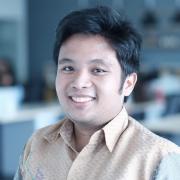 Surahman Putra is a GIS Analyst and Programmer in the WRI Indonesia office. He works on developing GIS and database systems for WRI Indonesia's researches and projects. One of the system he had made is Sustainable Energy One Map.

Prior to joining WRI, Putra worked as a GIS Researcher. He held researcher positions at Pusat Infrastruktur Data Spasial, a spatial research institution which affiliates with Institut Teknologi Bandung and Indonesia's Spatial Agencies. Most of the projects he has done were GIS system to support the Indonesian government.

Putra love travelling and have a dream to set a foot on every country in the world. He also enjoy the time with his cats.