This article is currently only available in English.

The newest report from the Intergovernmental Panel on Climate Change (IPCC) paints a troubling picture: Climate change is already impacting every corner of the world, and much more severe impacts are in store if we fail to halve greenhouse gas emissions this decade and immediately scale up adaptation.

Following on the first installment of the IPCC’s Sixth Assessment Report, Working Group II's contribution, released on February 28, 2022, draws from 34,000 studies and involved 270 authors from 67 countries. It provides one of the most comprehensive examinations of the intensifying impacts of climate change and future risks, particularly for resource-poor countries and marginalized communities. The 2022 IPCC report also details which climate adaptation approaches are most effective and feasible, as well as which groups of people and ecosystems are most vulnerable.

UN Secretary-General Antonio Guterres called the report "an atlas of human suffering and a damning indictment of failed climate leadership."

Here are six takeaways from the report:

1. Climate impacts are already more widespread and severe than expected.

Climate change is already causing widespread disruption in every region in the world with just 1.1 degrees C (2 degrees F) of warming.

Withering droughts, extreme heat and record floods already threaten food security and livelihoods for millions of people. Since 2008, devastating floods and storms have forced more than 20 million people from their homes each year. Since 1961, crop productivity growth in Africa shrunk by a third due to climate change.

Today, half the global population faces water insecurity at least one month per year. Wildfires are scorching larger areas than ever before in many regions, leading to irreversible changes to the landscape. Higher temperatures are also enabling the spread of vector-borne diseases, such as West Nile virus, Lyme disease and malaria, as well as water-borne diseases like cholera.

Climate change is also harming species and whole ecosystems. Animals such as the golden toad and Bramble Cays Melomys (a small rodent) are now extinct due to the warming world. Other animals, such as the flying fox, seabirds and corals, are experiencing mass die-offs, while thousands more have moved to higher latitudes and elevations. 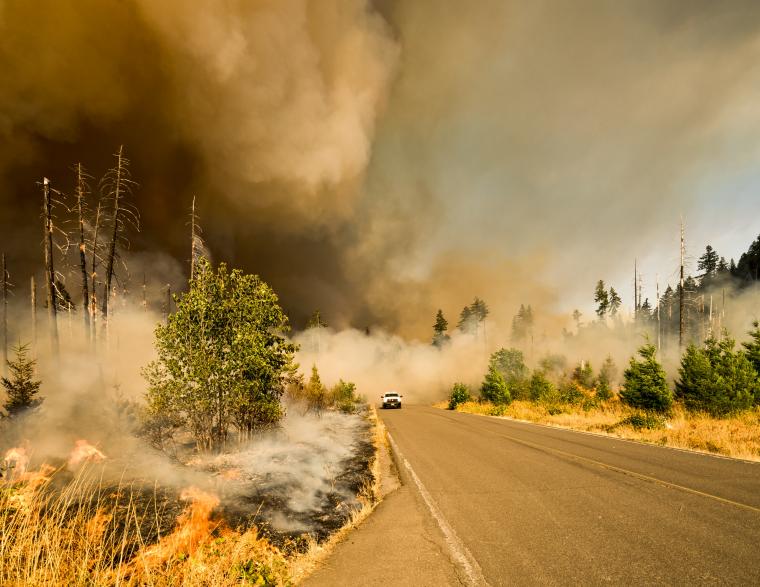 2. We are locked into even worse impacts from climate change in the near-term.

Even if the world rapidly decarbonizes, greenhouse gases already in the atmosphere and current emissions trends will make some very significant climate impacts unavoidable through 2040. The IPCC estimates that in the next decade alone, climate change will drive 32-132 million more people into extreme poverty. Global warming will jeopardize food security, as well as increase the incidence of heat-related mortality, heart disease and mental health challenges.

For example, under a high emissions scenario, increased flood risk could lead to an additional 48,000 deaths in children under 15 years old in 2030, due to diarrhea. Species and ecosystems will face dramatic changes as well, such as mangroves failing to counteract sea level rise, declines in sea-ice dependent species and large-scale tree death.

The report finds that every tenth of a degree of additional warming will escalate threats to people, species and ecosystems. Even limiting global warming to 1.5 degrees C (2.7 degrees F) — a global target in the Paris Climate Agreement — is not safe for all.

For instance, with just 1.5 degrees C of global warming, many glaciers around the world will either disappear completely or lose most of their mass; an additional 350 million people will experience water scarcity by 2030; and as much as 14% of terrestrial species will face high risks of extinction. 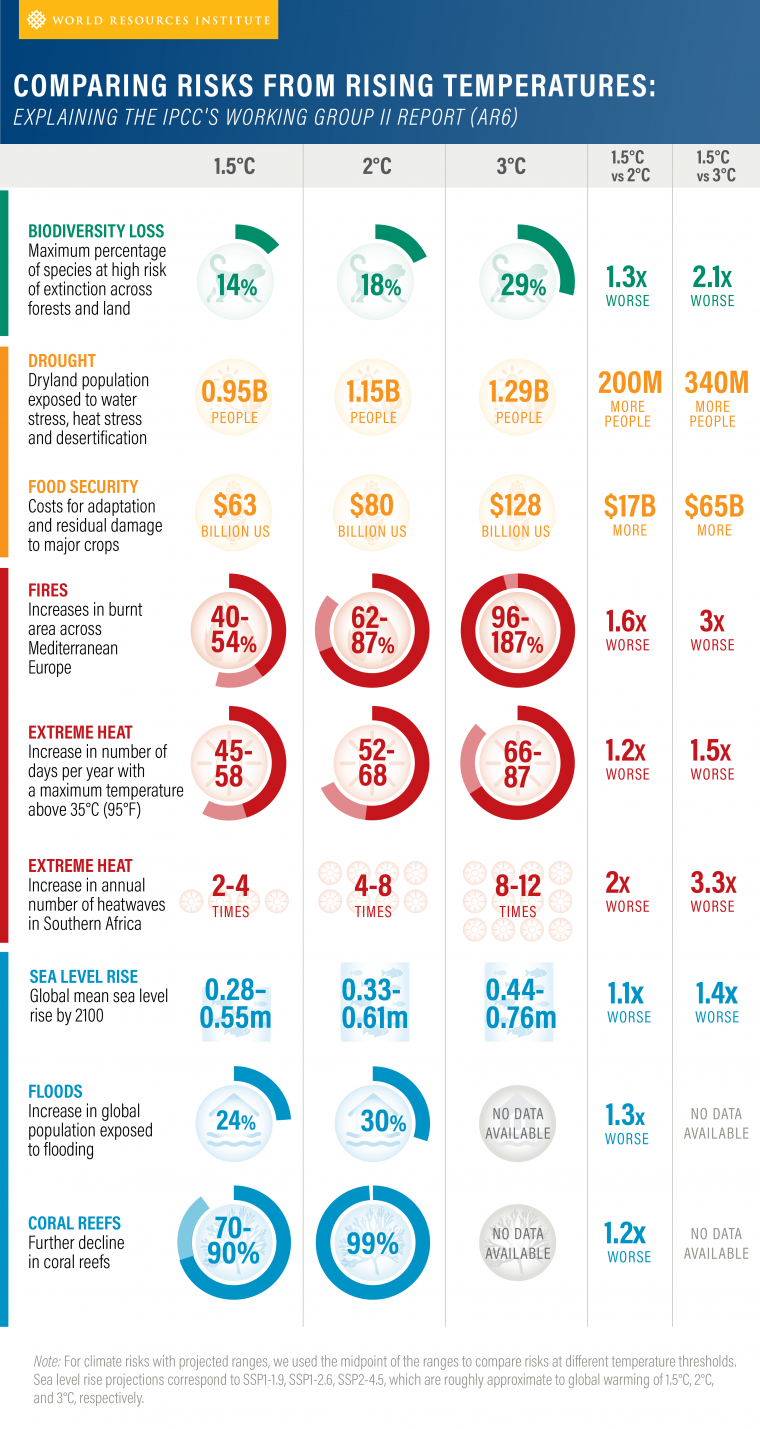 The IPCC projects that these risks will compound one another as multiple hazards occur at the same time and in the same regions. For example, in tropical regions, the combined effects of heat and drought may trigger sudden and significant losses in agricultural yields. At the same time, heat-related mortality will increase while labor productivity decreases, so people will not be able to work harder to overcome drought-related losses. Together, these impacts will lower families’ incomes while raising food prices — a devastating combination that jeopardizes food security and exacerbates health risks like malnutrition.

Inequity, conflict and development challenges such as poverty, weak governance, and limited access to basic services like healthcare not only heighten sensitivity to hazards, but also constrain communities’ ability to adapt to climatic changes. In highly vulnerable nations, for example, mortality from droughts, storms and floods in 2010-2020 was 15 times greater than in countries with very low vulnerability.

Exposure to climate impacts rose dramatically in cities since the publication of the IPCC’s Fifth Assessment Report in 2014. The fastest increases in urban vulnerability occurred across informal settlements, where precarious housing, inadequate access to basic services, and limited resources impede resilience efforts. This challenge is especially acute in sub-Saharan Africa, where 60% of the urban population lives in informal settlements, and in Asia, where 529 million people reside in these vulnerable areas.

Many rural communities also face increasing climate risks, particularly Indigenous Peoples and those whose livelihoods depend on sectors directly exposed to climate risks, such as agriculture, fishing and tourism. As climate impacts intensify, some households may have little choice but to move to urban centers. The IPCC projects that by 2030, extreme droughts across the Amazon will spur rural migration to cities, where Indigenous Peoples and traditional communities will likely be forced to live on the margins.

Not only do these urban and rural development patterns shape such unequal experiences of climate hazards, they also make ecosystems themselves more vulnerable to climate change. Land-use change, habitat fragmentation, pollution and species exploitation are weakening ecological resilience. And ecosystem loss, in turn, amplifies people’s vulnerability.

Cities expanding across coastal wetlands, for example, degrade ecosystems that otherwise would have helped protect shoreline neighborhoods from sea level rise, storm surges and coastal flooding. These climate hazards can have cascading and compounding effects on residents’ health, food security, access to clean water and livelihoods, which makes them even more vulnerable to future risks. 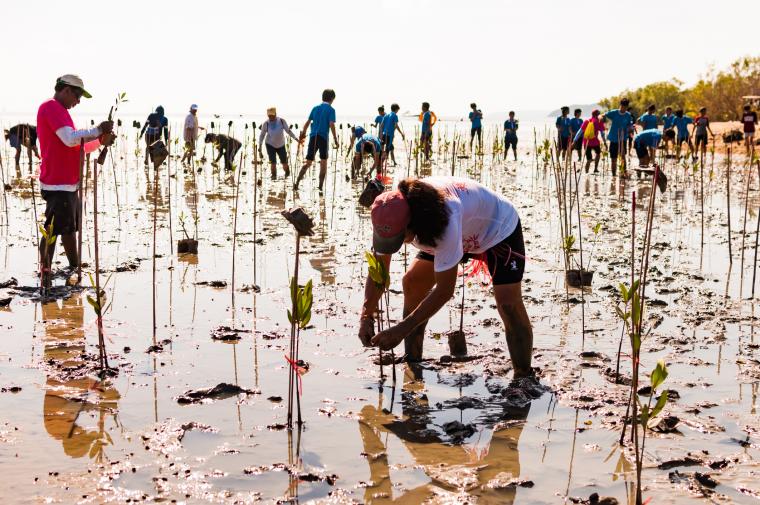 Restoring mangroves in Phuket, Thailand. Mangrove restoration is a form of ecosystem-based adaptation, which can reduce climate risks while delivering co-benefits for livelihoods, ecosystems, human health and more. Photo by normalfx/iStock

At least 170 countries’ climate policies now include adaptation, but many have yet to move beyond planning into implementation. The IPCC finds that efforts today are still largely incremental, reactive and small-scale, with most focusing only on current impacts or near-term risks. A gap between current adaptation levels and those needed persists, driven in large part by limited financial support. The IPCC estimates that adaptation needs will reach $127 billion and $295 billion per year for developing countries alone by 2030 and 2050, respectively. At the moment, adaptation accounts for just 4-8% of tracked climate finance, which totaled $579 billion in 2017-18.

6. But some impacts of climate change are already too severe to adapt to. The world needs urgent action now to address losses and damages.

With the 1.1 degrees C of global warming the world is already experiencing, some highly vulnerable people and ecosystems are beginning to reach the limits of what they can adapt to. In some regions, these limits are “soft” — effective adaptation measures exist, but political, economic and social challenges hinder implementation, such as limited access to finance. But in others, people and ecosystems already face or are fast approaching “hard” limits to adaptation, where climate impacts are so severe that no existing adaptation measures can effectively prevent losses and damages. For instance, some coastal communities in the tropics have lost entire coral reef ecosystems that once helped sustain their food security and livelihoods. Others have had to abandon low-lying neighborhoods and cultural sites as sea levels rise.

Whether facing soft or hard limits of climate adaptation, the result for communities is devastating and oftentimes irreversible. These losses and damages will only increase as global temperatures rise. For instance, if the world warms beyond 1.5 degrees C, communities that depend on glacial and snow melt will face water shortages to which they cannot adapt. At 2 degrees C (3.6 degrees F), the risk of simultaneous failures in maize production across key growing regions will increase significantly. And above 3 degrees C (5.4 degrees F), parts of southern Europe will experience dangerously high summertime heat.

A Rapidly Closing Window of Opportunity for Climate Action

The science is unequivocal: Climate change endangers the well-being of people and the planet. Delayed action risks triggering impacts of climate change so catastrophic our world will become unrecognizable.

The next few years offer a narrow window to realize a sustainable, livable future for all. Changing course will require immediate, ambitious and concerted efforts to slash emissions, build resilience, conserve ecosystems, and dramatically increase finance for adaptation and addressing loss and damage.

The COP27 summit, held in Egypt in November 2022, is a crucial opportunity for governments to make progress on all these fronts, and for developed countries to demonstrate their solidarity with vulnerable nations.

Coming to grips with the climate crisis will not be easy. Governments, civil society and the private sector must all step up. As the IPCC report makes clear, there is no alternative.