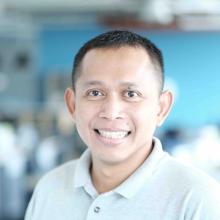 Prior to joining WRI, he worked at Thünen Institute of International Forestry and Forest Economics in Hamburg, Germany and focused on the analysis of drivers of deforestation/reforestation and spatial modeling of tropical landscape dynamics in the Philippines and Ecuador. Previously, he spent 4 years working at the Center for International Forestry Research (CIFOR) based in Indonesia and is responsible to integrate socio-economic and spatial data for analyzing drivers of deforestation and forest degradation in Indonesia, Vietnam, Peru, Brazil, Cameroon, and Zambia. He was also an observer of UN Climate negotiations, following the progress of REDD+ and climate change mitigation negotiations.

He holds a PhD in Geoinformatics from Technical University Bergakademie Freiberg, Germany and MSc in Natural Resources Management from the International Institute of Geo-Information Science and Earth Observation (ITC) The Netherlands.

Apart from the work, he loves cooking and enjoys Asian cuisine, listening to music, and watching movies.