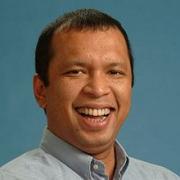 Handry Satriago is the CEO of General Electric Indonesia. He joined GE in 1997 as the Business Development Manager at GE International. He had several roles within GE businesses such as General Manager for Industrial Lighting, Asia Regional Black Belt Six Sigma Quality, and Director of Power Generation for Indonesia, Vietnam, Cambodia, and the Philippines.

Handry loves education and volunteerism activities. He spends his spare time to do sharing with the students and youth communities. Handry wrote two national best-selling books, #sharing and #sharing2. Handry received some awards from local and international institutions for his activities on developing future leaders and business management. He is also a member of Advisory Board for some volunteers organizations and universities. He married Dinar Sambodja and they have twin daughters. Handry enjoys reading, sports, and collecting traditional Balinese paintings.