Indonesia has one of the world’s highest rates of deforestation, as well as millions of people dependent on forests for their livelihoods. Many live in traditional (adat) communities, which until recently lacked legal rights to the lands they have used and protected for generations.

Last year’s Constitutional Court ruling could effectively return the management of “customary”—or historically held—forests back to adat communities. But in a place where maps are often hand-drawn or open to various interpretations, it’s been difficult to define customary lands on official maps.

For Hairul Sani, the Research and Database Officer for Jari Borneo Barat Indonesia, an NGO that supports community land rights in Indonesia’s West Kalimantan region, the ability to create digital maps has transformed his efforts to help communities advocate for their land rights. West Kalimantan suffers from one of the highest rates of deforestation in Indonesia, much of it coming from palm oil expansion.

We met Hairul in September, when WRI conducted the first of a series of Geographic Information System (GIS) workshops for more than 30 civil society organizations throughout Indonesia. GIS maps are one of the clearest and most accurate ways to share geographic data, and provide much more information and analysis than typical paper maps. For local communities, it can be an invaluable tool to stake out traditional boundaries and resolve land conflicts with government and developers.

As a result of the training, Hairul can now produce GIS maps that show conflicting land uses, redefine village boundaries, and pinpoint potential law violations. “The biggest difference before and after joining WRI’s GIS training”, Hairul explained, “is that now I can facilitate a far more effective public consultation with communities, as well as doing advocacy to government using maps.” 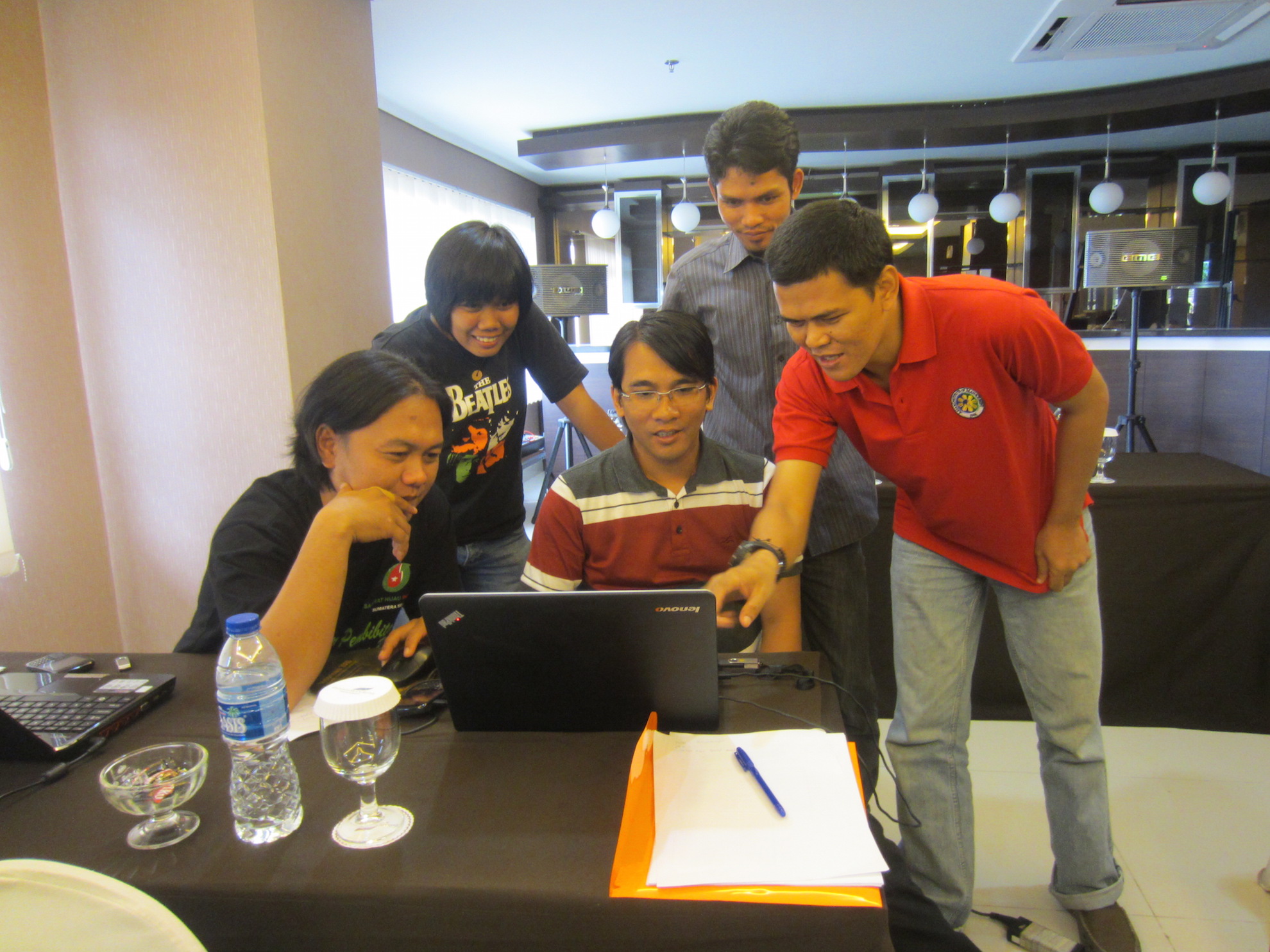 But it’s not just Hairul’s organization who can benefit from GIS mapping. While conducting the trainings in Indonesia, we saw four clear benefits of GIS mapping: 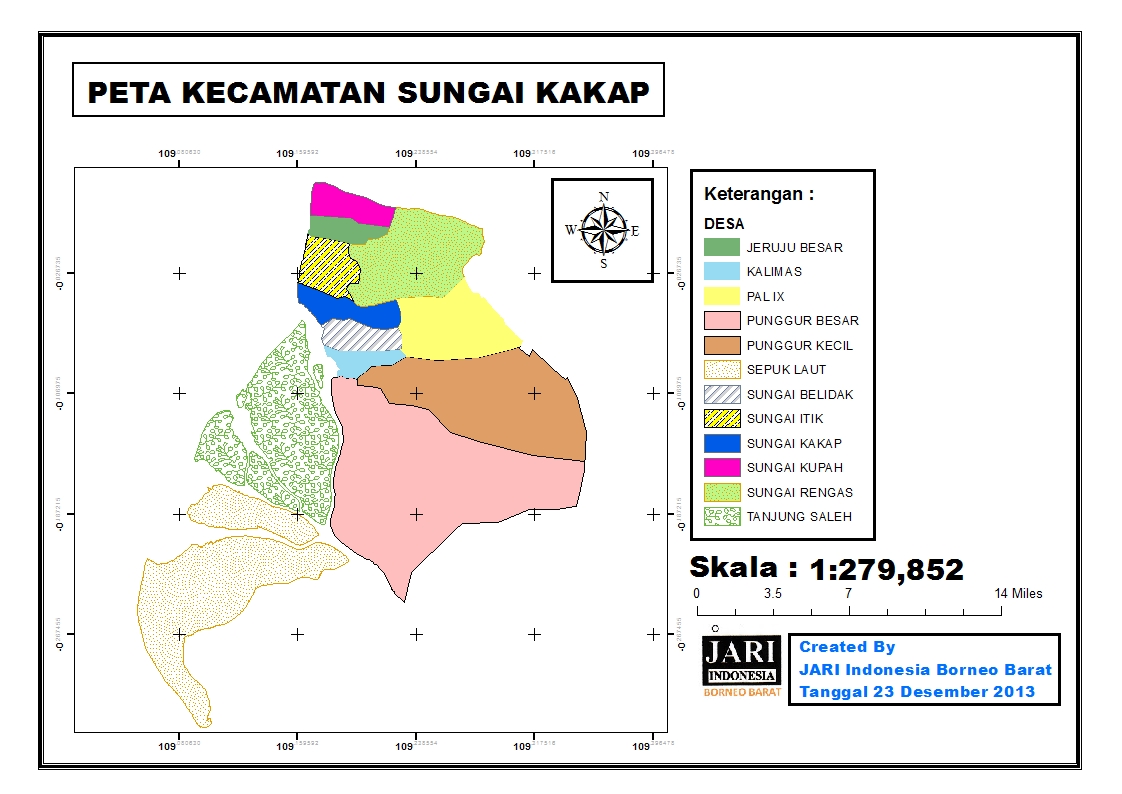 This map shows the boundaries of all villages in Sungai Kakap sub-district.

During the training, participants learned to digitize the data behind their customary land boundaries to produce a digital map. Displaying this information as a map is easier to understand than a list of GPS points, and looks more authoritative than a hand-drawn map. The communities can then use these maps in negotiations over land conflicts.

Hairul created this village boundary map (above) with communities throughout Sungai Kakap sub-district and by collecting GPS coordinates in the field. He then digitized the points to create this map, giving him a professional-looking baseline from which to work.

2. Local people can use GIS mapping to improve the accuracy of government maps.

Maps in Indonesia are often made by government agencies or research organizations that may be far removed from the realities on the ground. When people at the local level can produce their own data and GIS analysis, their results can help uncover discrepancies with maps and data produced by the government.

Community mapping efforts often result in hand-drawn maps that show the location of important landmarks, traditional land uses, and village boundaries. Digitizing these maps using GIS software improves the accuracy of hand-drawn map features by linking them to a geographic coordinate system. This data can then be combined with other data layers such as company concessions or legal land classifications to produce powerful analysis that can potentially help resolve land conflicts. 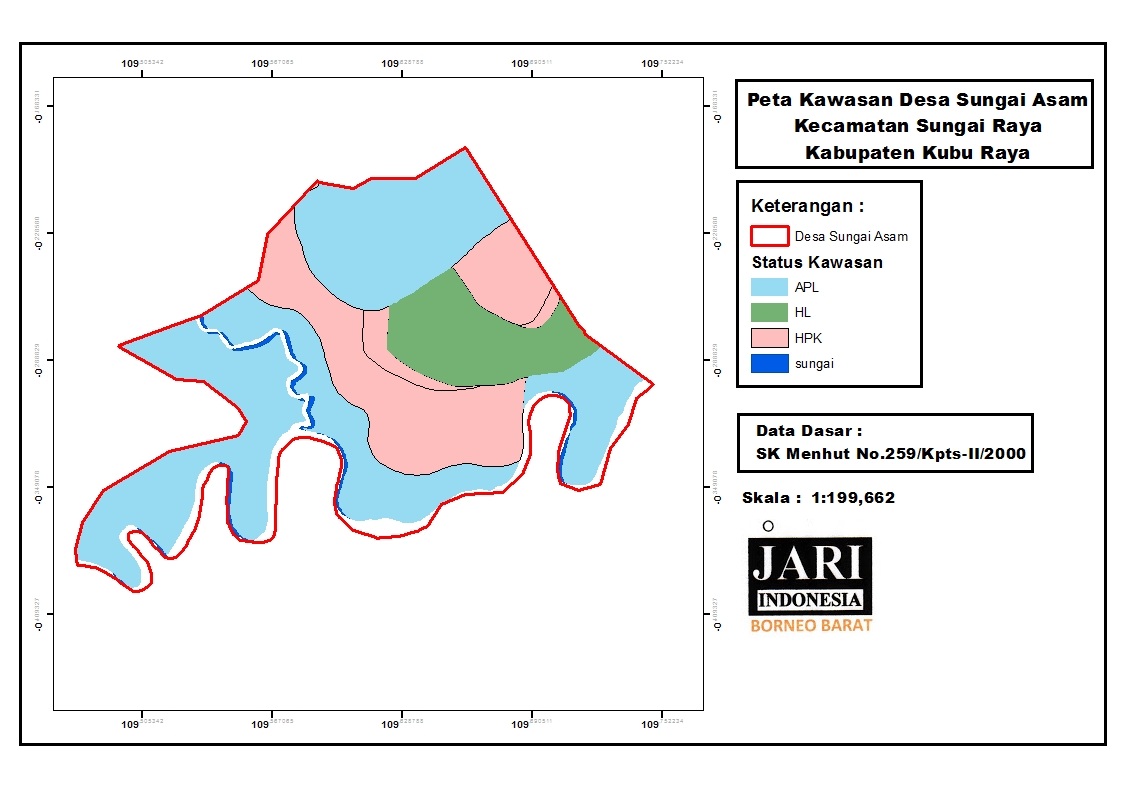 This map shows the legal land status within the boundary of Sungai Asam village, and helped Hairul pinpoint many inaccuracies with the official government maps.

In the map above, which shows the legal land status within the boundary of Sungai Asam village, Hairul found many inaccuracies with the official sub-district government map. Communities can submit digital maps like these to the government along with a request to revise the sub-district map.

In many of the public consultations that Hairul conducts, for example, he finds that communities are sometimes not aware of existing concessions or even the legal classification of their land. Hairul created a digital map of the legal classifications in Sungai Asam village so that villagers can clearly see the legal status of their land and use this information to enforce proper land use.

Hairul created the map below to show where the District Government’s rice estate, (blue) overlaps with existing company concessions (red) in Sungai Bemban Village, Kubu Raya District, and West Kalimantan. He overlaid this information on a map of the legal classification of the land to help pinpoint the source of potential land conflicts. Hairul aims to use this map to advocate for better spatial planning practices in the regional government. 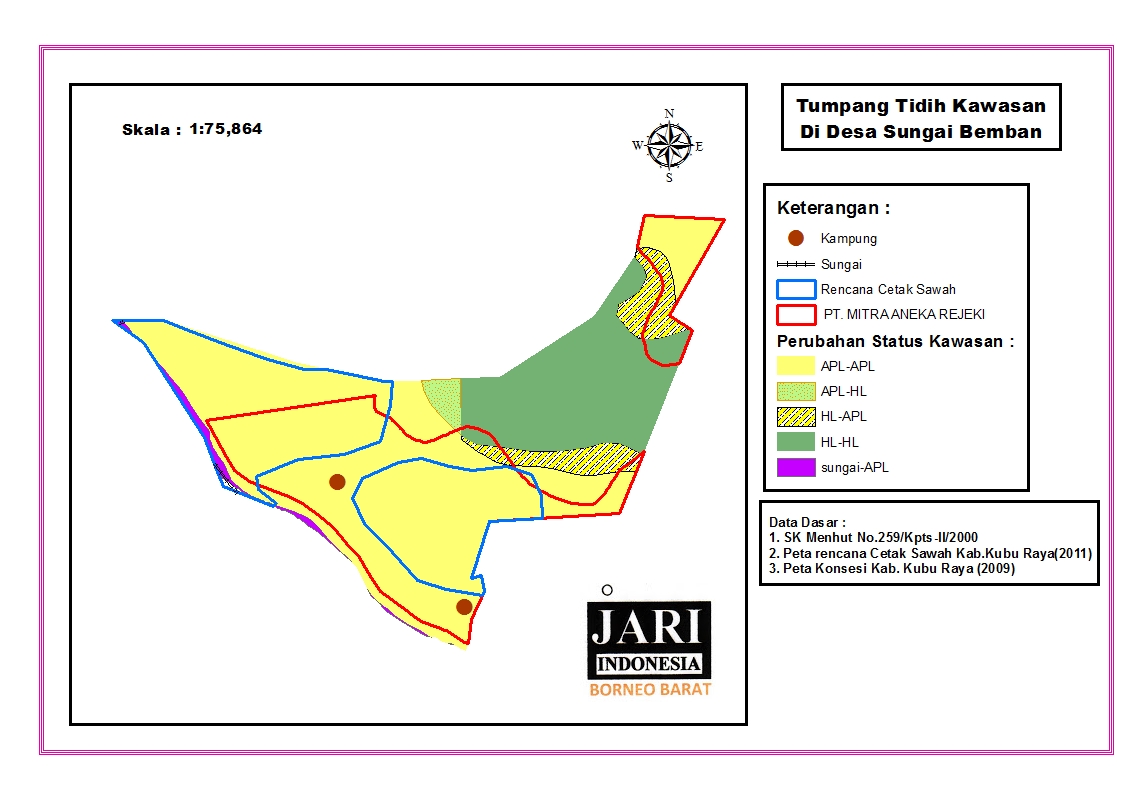 Digital maps are easy to share online with the media, governments, and the general public when good data management and sharing practices are in place. For example, ArcGIS Online provides an easy way for users to create and share online interactive maps without needing GIS skills or software.

As Hairul’s example shows, the spike in available data and the spread of GIS technology can empower people working at the local level to improve land rights and forest protection in their own communities. WRI’s GIS trainings are part of a larger movement, too: Indonesia’s largest NGO for local communities, the Indigenous Peoples Alliance of the Archipelago (AMAN), is working to compile digitized maps of customary lands throughout Indonesia.

We hope to continue providing trainings and technical support to local NGOs like Jari Borneo Barat, to spread GIS skills and empower communities throughout Indonesia. As for Hairul, he plans to work with more villages to create digital maps that they can use to influence local spatial planning policies. We are excited to hear about his progress and will continue to check in with him over the coming months.