Home > Blog > How A Local Indonesian Graduate Scored An Internship In DC And How You Can Too!

Working in DC has been a long-time dream of mine. While visiting the incredible Smithsonian museums would be a definite highlight, an avid TV series watcher such as yours truly (House of Cards, Veep, and Scandal among others), I wanted to experience DC’s atmosphere in real life: mingle with DC intellectuals, cross the Potomac River, look fly in pantsuits walking down Capitol Hill, or something even as simple as getting lunch from a food truck and buying groceries from Trader Joe’s (or Whole Foods when you’re feeling rich). Darn those popular American TV Series!

In achieving this aim, I must admit I did not succeed at my first try. Or second. Or even third. Suffice it to say, I lost count. This attempt all started in my last year of university in Indonesia, when I had intensively sought after internships in Washington DC. I found that, for a local Indonesian graduate such as myself, three main challenges arose: (1) work visa, (2) high living cost (DC has one of the highest), and (3) travel costs to get there. So even if I tried saving up for a plane ticket to America, finding an internship/job that could cover the living cost in DC would be incredibly hard to find (at least, ones that I qualify for). Even then, employers tend to seek persons who already have permits to work in America. Apparently, if an organization hires someone without a permit, the organization has to pay quite a large amount for the employee’s visa, and that would be too costly for an entry-level job.

Sometime during that search, I scrolled down my social media feed and stumbled upon the announcement of the Indonesian Young Thought Leadership Competition held by World Resources Institute Indonesia. “One month internship at the World Resources Institute, Washington DC” as I recall the poster said. But the topic itself, environment, was not something that I was familiar with. Though hesitant at first, as this was my first stint in writing about the topic, I decided to submit an essay anyway and offered a business law perspective (my focus in university at the time) on the issue. But after failing so many times, I did not expect much.

A few months later, I received an unexpected e-mail to present my essay in front of a panel of respected Indonesian environmentalists. Being new to the environmental field, my answer was probably a bit too pragmatic when it comes to conservation, but surprisingly that was what World Resources Institute was about: balancing economic growth and environmental conservation. Myself and two other finalists afterwards spent one month interning at World Resources Institute (WRI) Indonesia, in which WRI Indonesia then chose the one that got sent to DC. Even during my internship at WRI Indonesia, I already got a glimpse of a world that I would love to work in: think tanks. People were incredibly nice and welcoming, no dividing hierarchy was felt between the director, managers, and their assistants; and all ideas—even from a lowly intern—were heard and considered. Maybe it’s because the cause that we work for is good, it transforms the people in it to be good, too. When I worked as an intern at the Indonesian office, though I dreamed about being chosen to go to DC, I did not think I would stand a chance against the other finalists who were incredibly smart, qualified, and passionate about environmental work. I even applied to other jobs while waiting for the announcement. So when I received news that I had been chosen to spend another month at the organization’s DC office, I was of course over the moon. Transport and living cost covered as well!

It took me half a month to get all the administrative matters out of the way, and there I went! Living my dream! But wait. What if I can’t mingle well? I mean my knowledge of American working place had come solely from binge-watching American TV series! As my stomach churned for my first day of work at World Resources Institute’s office in DC, I sat in my very first meeting of the day: the management team meeting, where I sat between the Institute’s President, Andrew Steer and the Vice President for Communications, Lawrence MacDonald. Lawrence, who was also my host father, was kind enough to invite me to the meeting in the first place. “To get a good overview of what we do in the DC office,” he said. As I sat in the boardroom, I was pleasantly surprised of WRI’s scope of “environmental” work, which ranged from economics and business to cities and forests. The meeting had so much to cover but ran very effectively, addressing important updates from each division, and the President, who was an incredibly good listener, addressed the concerns with concrete actions as follow ups and solutions. After the meeting, Andrew started a conversation with me and was genuinely interested in what I had to say, he asked me which part of Indonesia I came from (as he had previously lived in Indonesia himself), what my essay was about, and the development of the projects I’ve helped with in Indonesia. That meeting and the encounter with Andrew had definitely set the tone for the rest of my internship in DC: effective work and genuine encounters.

During my one month internship, I got the chance to learn things outside my subject of expertise. I learned that there were so many elements to making a project work, besides good substantive research. The first couple of weeks, I was trained on monitoring and evaluation by Dow, an incredibly nice and smiley woman, who provided me with a comprehensive curriculum and set of learning materials. From this, I learned the importance of extracting relevant information from past and ongoing activities, because, without it, it would be hard to see whether the project is going in the right direction, how future projects might be improved, or even drive the impactful change the project aims to achieve. Like everyone else in the office, Dow was very open to any question I had and was glad to answer it without undermining it. Another subject I got to learn was the importance of Communications. I learned that no matter how useful a scientific research is if it does not get communicated properly, it is hard to create an impactful change. I got the chance to join the Communications retreat and learned the many ways to make scientific, environmental issues appealing to the public at large and targeted stakeholders. 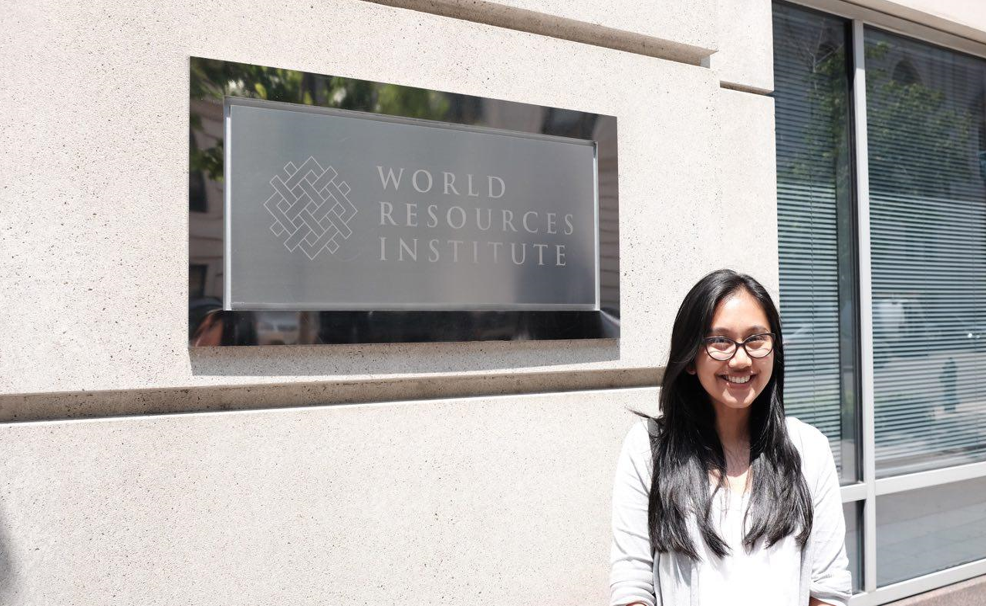 Posing in front of the WRI office.

The office environment at WRI amazed me, as it offered so much support to its employees. They had regular brown bag sessions (where you can bring your lunch to the boardroom and listen to interesting presentations on a variety of topics), its own library with lounge chairs as an alternative place to work, a comfy relaxation room to sleep in, and even a mother’s room where mothers can have a private closed office space to pump milk for their babies. No wonder it was awarded as one of the Top Workplaces by Washington Post! Interns alike were also encouraged to go to international events and conferences in town, even during work hours. I, of course, took the opportunity as DC is known to host many important international events. Among my highlights were watching Ban Ki-Moon speak at Climate Action 2016, attending an International Bar Association Meeting on Climate Change and Human Rights, speaking to lawyers who had represented several countries (Including Indonesia) in environmental cases, and taking a selfie with Bill Nye the Science Guy. 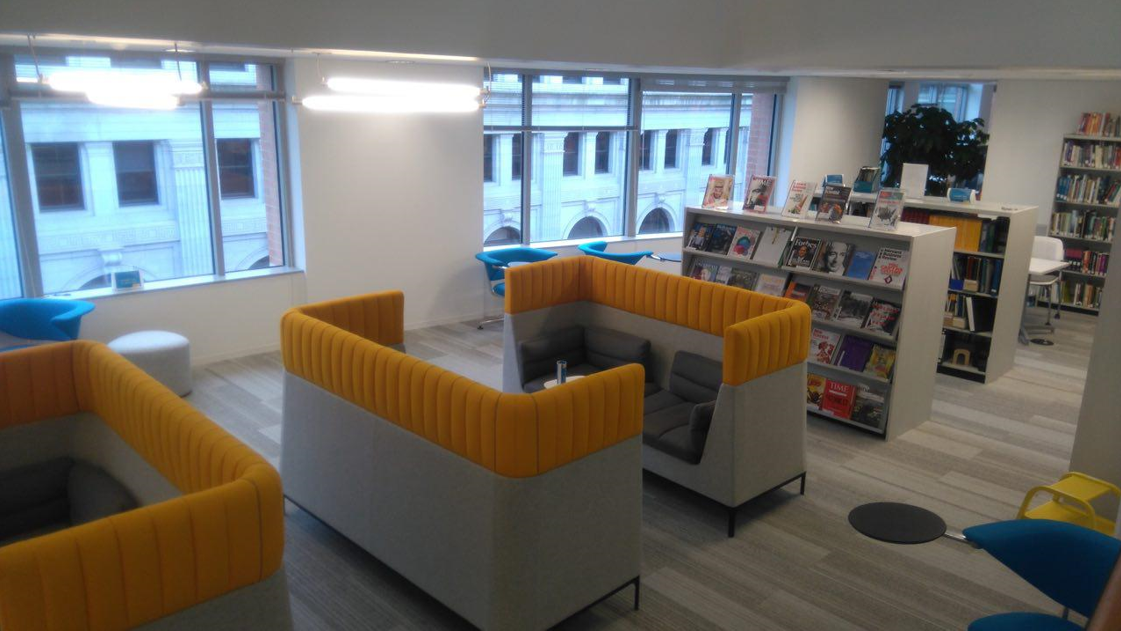 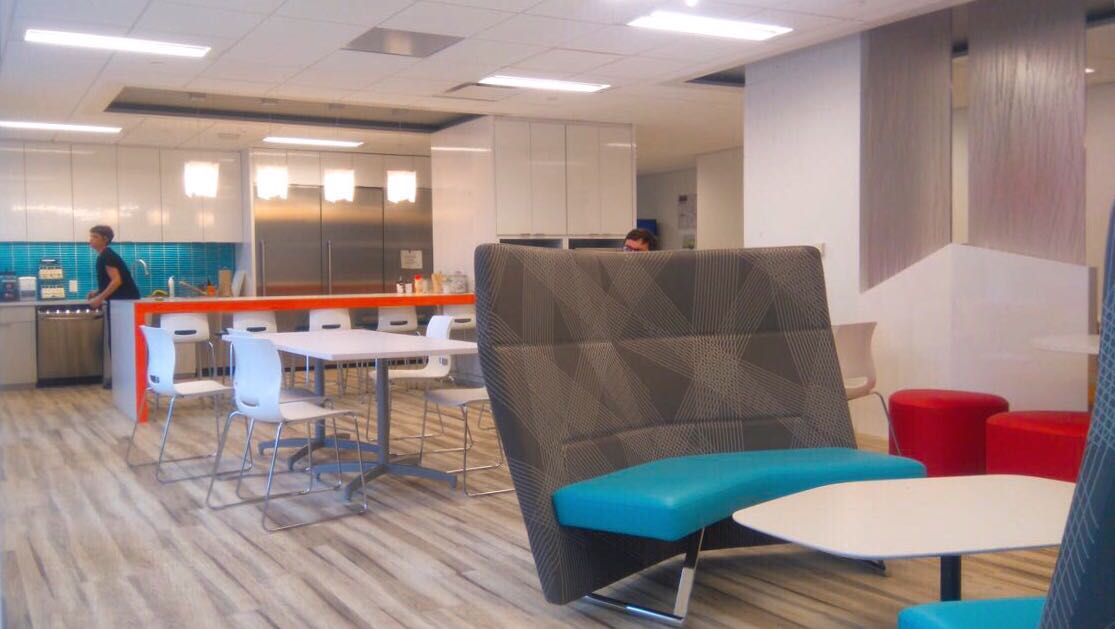 During my time in DC, I stayed with Lawrence MacDonald (WRI’s Vice President for Communications) and his wife, Hannah. Though I learned a lot of things from my time at WRI, I felt that I had learned more from living with them and trying to understand what it was like to be an American. Dinners with Lawrence and Hannah were always insightful and constantly filled my newfound perspective on America. Interestingly, the food we had for dinners had mostly been from other parts of the world (food I would have never tried/be able to find in Indonesia). But that’s what DC is all about. It is a melting pot of culture and appreciation for each. Lawrence and Hannah were nice enough to make the most out of my stay there: they took me on a Bikeshare around Capitol Hill, taught me about their religion, and had taken me to meet their friends who were equally highly-educated and progressive —the latter making DC an interesting place to stay. I could definitely write a whole other blog post (or two) about my experience staying with Lawrence and Hannah, but I would get a bit out of topic here, so maybe another time. 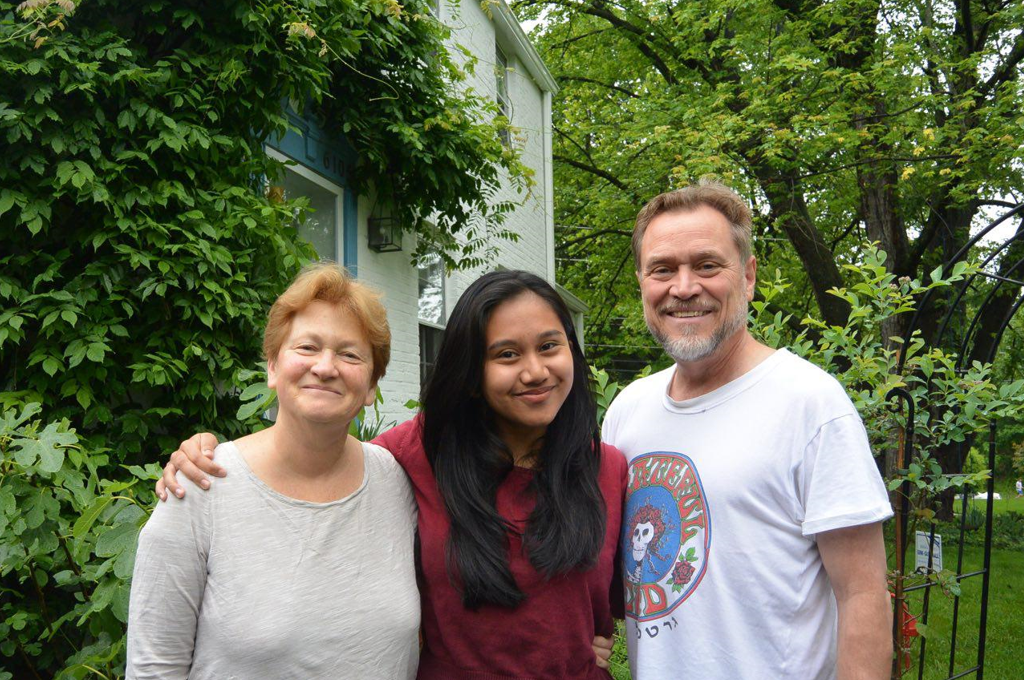 Pina with her host parents.

Overall, I am grateful for the chance to work in DC and for WRI, as it was much more than I hoped for. But I know now that I wouldn’t have gotten the experience if I had limited myself to my own field of study and comfort zone. So for those dreaming to work in DC, I implore you not to give up, to widen your interest, and to not be afraid to try new things! I learned that during my search for overseas internships and SKSD (sok kenal sok dekat) to people who have, is to focus on: international organizations based in Indonesia, Indonesian institutions that have cooperation with embassies or other overseas institutions (FPCI and WRI Indonesia, for example), or even nudge your professor who has a friend working at an international institution overseas. If you’re already in America, then great! Do use the opportunity to apply for internships while you’re there as you have your visa all sorted out already. You’ll find sites like idealist.org to be of particular help. If you have difficulties in finding a place to stay, I recommend you to reach out to fellow Indonesian students in the city, they would usually be more than happy to host you (but because of certain dorm restrictions you may have to move around a lot). If you have AFS friends, reach out to them, maybe they have a host parent that can help you out with your living situation. Remember that there’s more than one way to skin a cat, meaning that there are many ways to reach the goal.

So to end this article, I would like to part with the following message: dream, don’t give up, don’t limit yourself, and just give it a go!

(and maybe watch some TV series to get you motivated)

P.S. This year WRI Indonesia is making another competition for youths (max. 24 years old) with the same prize: one month internship at WRI’s office in DC. They’ve gone further for the prize this year, as there will be a training camp to brush up writing and researching skills for the Top 20 finalists. More information can be found in this link: www.bitly.com/IYTL2017. 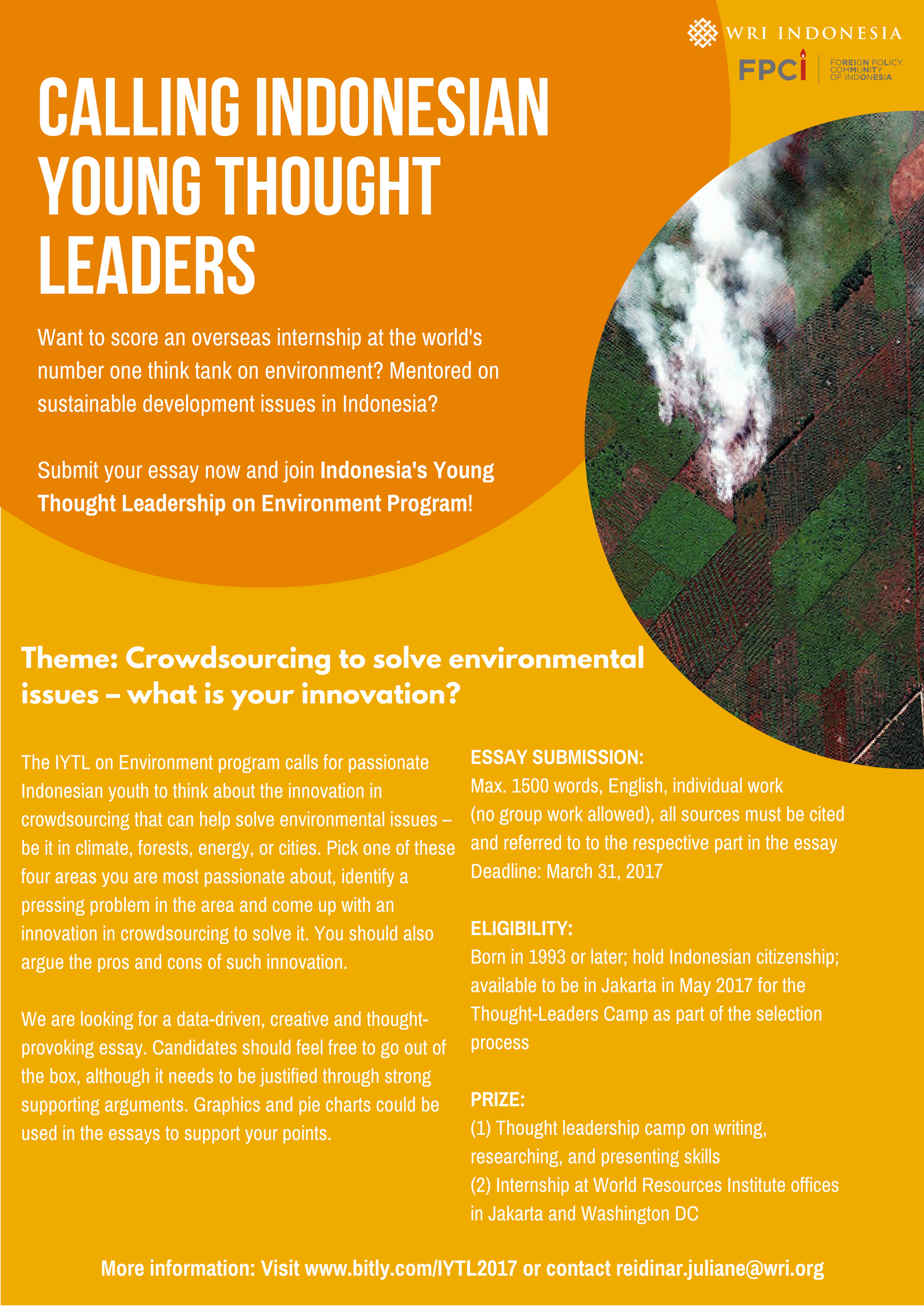