Our ocean is already full of plastic waste. The World Economic Forum foresees that the ocean will be populated by more plastic than fish (by weight) by 2050. The map photo of Riccardo Pravettoni below explains how human production and consumption from all sectors globally over the last 50 years have generated huge amount of debris, especially plastic. The production of plastic waste for every person has been growing substantially, polluting our land and ocean. The waste could form an island like the Great Pacific Garbage Patch, which is bigger in size than Texas or France. 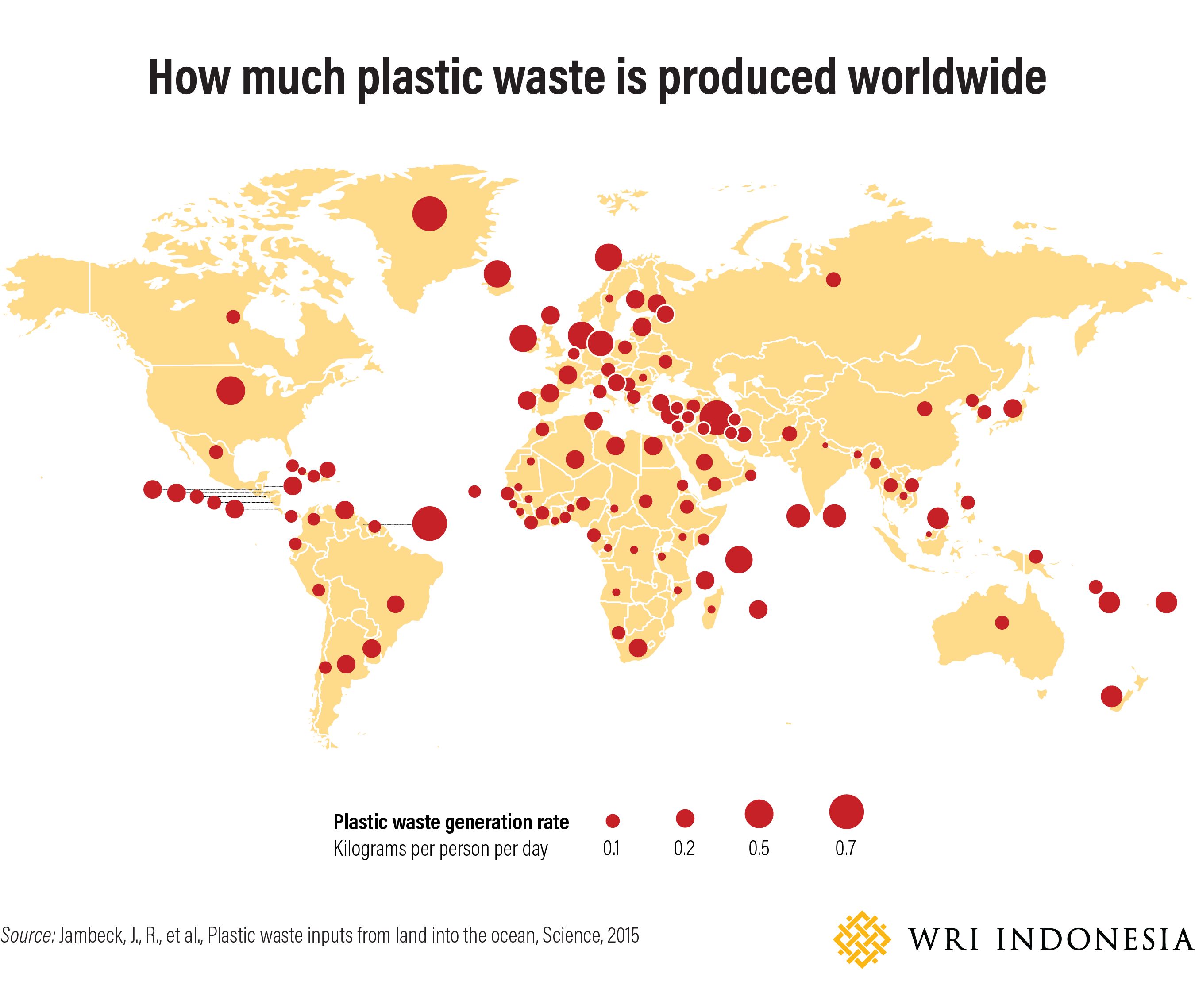 Plastic waste in the ocean is categorized as non-source pollution, meaning that the waste comes from many areas, and as such it is difficult to identify a single source. In 2010, World Bank Data shows that cities in Indonesia, especially coastal regions, contribute extensive waste to the ocean, amounting to approximately 3.22 million tons of waste, which includes 0.48 - 1.29 million metric tons of marine plastic debris every year. This equals to 178 - 480 million plastic waste per household per year.

Marine plastic pollution has an impact on both human and animals. For instance, plastic particles (micro-plastic) from marine plastic waste are identified inside fishes at Paotere, a small-scale fisherman port that is famous as a tourist destination in South Sulawesi. Microplastic can even be found in salt, which humans consume daily. Micro plastic in humans’ body can lead to inflammatory-related disease, insertion of chemical pollutants, and disruption in the digestive tract.

Strategies to combat plastic pollution in the ocean

The first strategy to combat plastic pollution in the ocean is to have an integrated platform that enables stakeholders to monitor and update the status and baseline data of waste both in mainland and in the ocean. Currently, the threat and risk of plastic waste in the ocean ecosystem cannot be properly identified due to the lack of data, including the amount and location of the plastic waste. Even when such data exist, they are in various degrees of quality, scattered in various hosting agencies and research institutions, and have not been systematically compiled. Therefore, it is often difficult for stakeholders such as the government and industrial companies to formulate an informed strategy and policy. Once we understand where and how much the waste is, we can deploy better waste management, both preventive and reactive.

Second strategy is to establish a circular economy solution to plastic waste which uses circular approach to reuse and resolve plastic litter in the most effective way. An instance of which is to compound plastic recycle materials with asphalt to build road, which has been implemented in Indonesia to improve public roads. Indonesia also teamed up with the Global Plastic Action Partnership (GPAP), an international public-private collaboration, to decrease plastic waste in the ocean by 70% by 2025 while considering the economy and people’s lives. The government of Indonesia and the GPAP deploy strategies such as collecting local waste management data and building a model that evaluates solutions such as reducing overpackaging, creating new recyclable plastics as well as increasing recycling and waste collection rates. Most importantly, the model will calculate the investment needed, timeline, environmental footprint and greenhouse gas emissions, as well as the impact on people's lives.

Finally, Indonesia needs to deploy a proper plastic waste management in the mainland, especially from residential houses and industries, as it will significantly reduce the amount of plastic waste in our ocean. One thing that can be applied is to establish zero-waste targets, meaning that 90% of waste (by weight) goes to recycling or composting and only 10 % or less goes to landfill or incineration. The Coordinating Ministry for Maritime Affairs has already implemented policies and approaches to control the amount of the waste in the mainland, including encouraging business to reuse, recycle, and reduce plastic. Main idea of 3R in waste management is how to handle the plastic waste from the early stages of waste treatment. Change in system as well as decisions in how we develop business framework will play a big role in developing waste management innovations.

All in all, collaboration and understanding among government, civil society organization, and community is required to apply and share integrated data, new business models, established public policies, and investment in technology and infrastructure to create a systemic solution to plastic pollution in the ocean. There are far too many plastic waste, we have no time to waste.