WRI Vice President for Communications Lawrence MacDonald recently visited Indonesia to learn about the interplay between land rights and deforestation. This is the second of three posts about the farmers, companies, officials and researchers working towards One Map.

One after another, the village heads, neatly groomed and dressed in fresh batik or polo shirts for the meeting at the sub-district chief’s office, rose to voice their grievances. The details differed, but the story was the same: A company had taken their land, converting it into a palm oil plantation. Requests for compensation had failed.

Seated beneath portraits of Indonesia’s president and vice president in the stuffy, worn assembly room in Musi Banyuasin, a rural district in South Sumatra, the sub-district chief listened with sympathy. His remarks suggested that he knew the issues all too well.

Last year, his boss, the district chief, established a local task force to resolve festering land disputes. Little had changed. Now a group of researchers from Jakarta had arrived offering to help.

“I’m not sure I can say the name of this organization very well because it’s English,” the sub-district chief said. “These people from the World Research Institute are going to solve this problem.” The team from WRI Indonesia smiled politely but inwardly squirmed—and not because of the malapropism.

“We need to be cautious about community expectations. We are not mandated to solve long-standing conflicts but we do want to help," Gita Syahrani, Sustainable Commodities & Business Manager for WRI Indonesia, said that evening at a team debrief. “We explained that we are here to learn and perhaps to offer suggestions.”

In truth, WRI researchers’ role is more complex and subtle than either the sub-district chief’s high hopes and Syahrani’s modest explanation would suggest. The team is helping to advance the Indonesian government’s One Map Policy, which aims to reduce conflict by compiling competing land claims on a single map and convening multi-stakeholder meetings to find solutions. 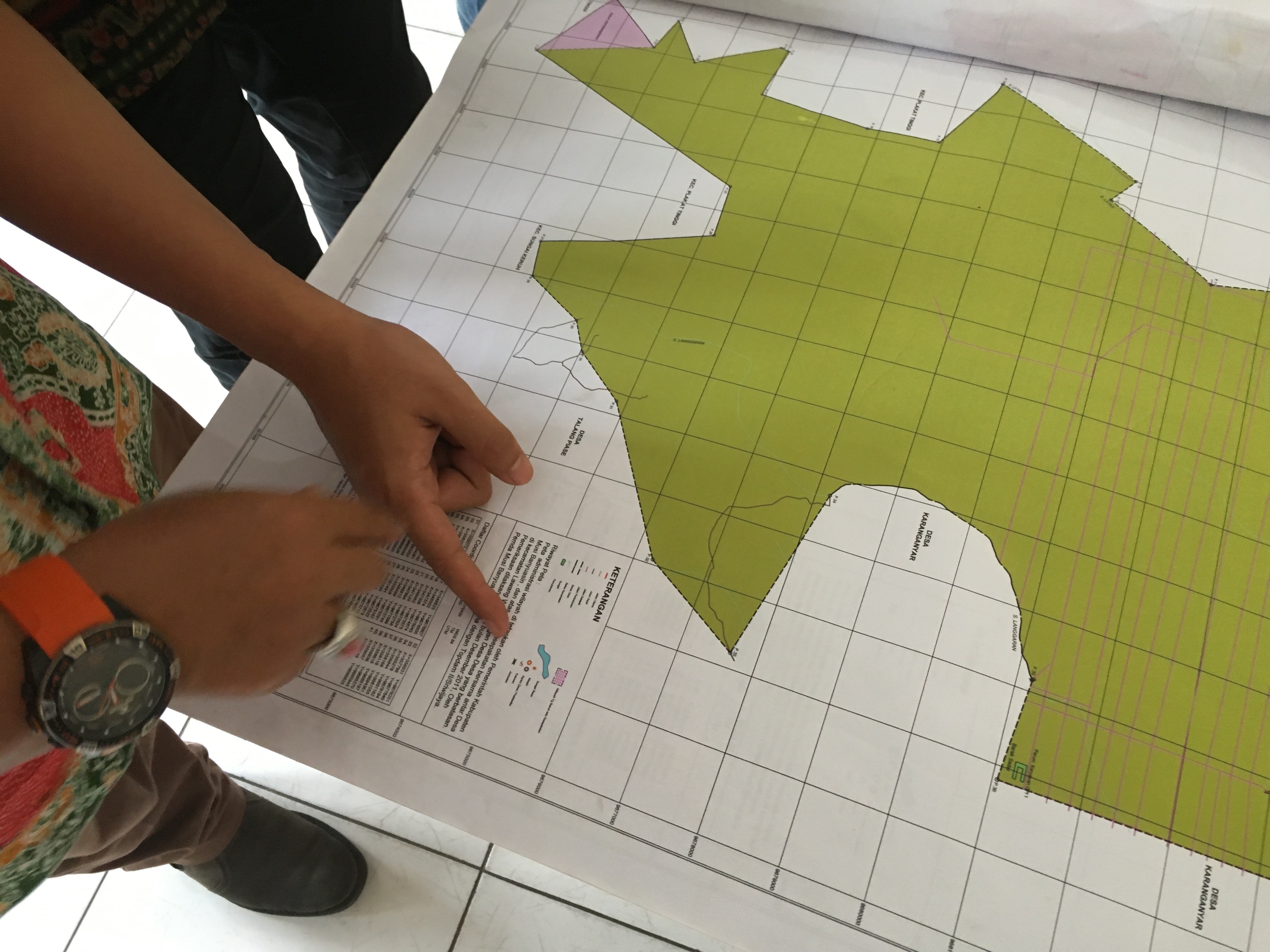 Maps are an expression of power. (WRI)

Land disputes are all-too-common in Indonesia, where records are often absent or incomplete and maps differ from one government agency to another. It’s a big reason why small farmers, communities that have traditionally held land in common, indigenous peoples and others often see their lands commandeered by larger operations, like palm oil production, logging or mining. Sometimes different government agencies grant competing companies rights to operate in overlapping jurisdictions.

“When the government first launched One Map, some people saw it largely as a technical issue,” said Leslie Dwyer, a U.S. anthropologist assisting with the initiative who has worked in Indonesia for more than two decades. “People hoped that coming up with a single map would solve the problems. But it turns out that the differing maps exist for a reason—they are an expression of an underlying power dynamic that some people benefit from greatly. Our work seeks to address that.”

Begun under the previous president, One Map got a boost in January 2016 when President Joko Widodo, also known as Jokowi, issued regulations to accelerate the initiative in line with Nawa Cita, or “Nine Hopes,” his national development strategy, which calls for increased access to land for ordinary people.

WRI Indonesia Director Nirata Samadhi, a.k.a. Pak Koni, says he hopes that WRI Indonesia’s research can support the government’s efforts to make One Map a success across the country.

In recent months, WRI Indonesia has assembled a team of GIS experts, lawyers, conflict specialists and researchers who will work with communities in four provinces: two on the island of Sumatra and two on the island of Papua. Papua, at the eastern end of the vast Indonesian archipelago, holds the country’s last great expanse of primary forest.

The team will draw upon WRI’s global experience in mapping, governance and data-driven decision-making to support local governments working with grassroots civil society organizations, village leaders, indigenous people and company representatives. In each community, the team will help the local government create a single, indicative map as the basis for solution-oriented discussions.

Whether that will work remains to be seen.

“We will be learning as we go along,” says Adi Pradana, WRI Indonesia’s One Map Initiative Governance Manager. “We plan to share what we learn in a series of research publications that can help the government to make One Map a reality.”