With greenhouse gas emissions climbing and climate impacts becoming increasingly severe, the urgency to address climate change has never been greater. Many of the solutions to date have focused on mitigation—ways to slash emissions as quickly as possible, such as by adopting renewable energy, promoting energy efficiency and stopping deforestation. These efforts remain critically important, and we need to accelerate them. Yet the science shows they will not be enough on their own to have a good chance of meeting the goals of the Paris Agreement on climate change.

Here, we take a look at the latest science on negative emissions and carbon-removal approaches:

Why do we need to achieve negative emissions?

The latest climate science shows that in addition to climate mitigation, the world will need to remove carbon from the air and store it if we are to have a good chance of achieving the global goals of limiting temperature rise to 1.5-2 degrees C (2.7-3.6 degrees F), the temperature limit countries agreed to as part of the international Paris Agreement on climate change. Most scientific estimates show that to keep those goals within reach, the global emissions trajectory needs to not only reach net-zero by the second half of this century, but continue downward into net-negative emissions. Negative emissions are necessary to offset the last remaining greenhouse gas-emitting activities that are too challenging or expensive to eliminate, and to compensate for any temporary overshoot of the temperature goals. 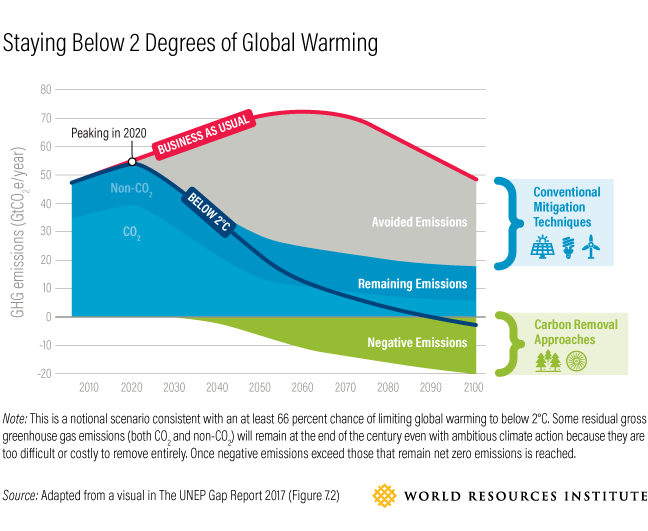 How can we achieve negative emissions?

Carbon-removal strategies, as the name implies, remove carbon dioxide from the atmosphere and store it through various means, such as in soils, trees, underground reservoirs, rocks, the ocean and even products like concrete and carbon fiber. The most obvious example of this is photosynthesis, where trees absorb carbon dioxide from the surrounding air and use it to grow.

No. While solar radiation management aims to reduce the severity of climate impacts, unlike carbon removal, it does not address the source of the problem: increasing concentrations of greenhouse gases in the atmosphere. Rather, solar radiation management seeks to reduce the amount of radiation that reaches Earth, such as by brightening clouds, injecting reflective particles into the atmosphere or even installing mirrors in space.

Carbon removal and solar radiation management come with very different risks, potential impacts, research needs and costs, but neither is exempt from controversy. Solar radiation management has sparked debate around potential unintended consequences for the hydrological cycle and plant life, among other issues. Some forms of carbon removal are also subject to significant debate, such as whether bioenergy with carbon capture and storage (BECCS)—which involves burning biomass like crop wastes for energy and capturing and storing the carbon emissions underground in geological formations—can be truly sustainable at a large scale given competing needs for land, among other concerns.

How much carbon removal do we need?

Is any of this actually possible?

Natural approaches for carbon removal can play a significant role in the near-term. Recent research found that natural solutions like improved management of forests, wetlands, grasslands and agricultural lands can remove about 5.6 GtCO2e of carbon per year by 2030—a figure equivalent to total global emissions from agriculture in 2014—at a cost of less than $100 per tonne of carbon. Natural approaches also carry numerous co-benefits, from improving soil and water quality to protecting biodiversity.

Yet they are not without risk. For example, carbon may not be removed permanently, eventually reverting to the atmosphere, such as when a major fire destroys restored forestland or when a farmer plows up a field previously restricted from tilling. Carbon-removal activities can also trigger emissions elsewhere, such as if planting trees on agricultural land leads to trees being cut down elsewhere to meet growing food demands.

Several technological approaches also offer promise, but most are not ready for deployment and others remain costly and risky. Most of the climate models rely significantly upon BECCS to achieve negative emissions, but this approach also poses challenges, such as displacing forests and crop lands to make way for bioenergy production.

Where is carbon removal already happening?

Efforts to manage soils and forests more effectively to store carbon—like through reforestation and restoring degraded landscapes into productivity—are ongoing, but have not occurred close to their estimated need or potential. For example, while countries around the world have set an ambitious goal to restore 350 million hectares of degraded lands by 2030, one study found carbon removal potential through restoration and several other measures across several billion hectares. But it is critical to note that whether and how the world can mobilize action at this scale is a subject of ongoing debate. Optimism needs to be tempered by what is realistic given competing demands for land and other resources.

Technological approaches are in their infancy, but gaining traction. For example, there are now a handful of commercial direct air capture and storage systems in Canada, Europe and the United States, as well as some academic research efforts. BECCS is also entering a demonstration phase, with half a dozen or so operational projects and more than a dozen planned.

A new power system called the Allam Cycle is also something to watch. The technology makes carbon capture part of the core electricity-generation process. NET Power is using the technology in the first-ever zero-emissions natural gas demonstration plant in La Porte, Texas, which is expected to begin supplying power to the grid in 2018. If it works, the Allam Cycle facility will capture all the carbon dioxide it produces, and is projected to be cost-competitive with conventional natural gas power systems once the technology matures. This demonstration plant could therefore have a transformative effect on the power system, and incentivize investments in critical infrastructure like geological storage, which will ultimately help bring down the cost of carbon removal.

It will need to pursue all efforts to reduce emissions. We can’t take our foot off the pedal for any mitigation efforts, and at the same time, we need to explore options for investing in carbon removal—in a way that complements and even supports mitigation efforts, to the extent possible. This means rapidly deploying natural carbon-removal approaches while continuing to research, develop and demonstrate technological approaches that have the potential to scale.

Encouragingly, pathways for many carbon-removal approaches can go hand-in-hand with mitigation. For example, direct air capture technology requires low-cost, carbon-neutral energy, underscoring the need to scale up wind, solar and other renewables. And natural carbon-removal approaches can help cut emissions while providing a suite of benefits like improved food yields and resilience.

WRI is pursuing a new body of research to explore the challenges and opportunities to scale carbon-removal strategies in combination with advancing efforts to curb emissions.