Why Indonesia needs to have an enhanced NDC? Policy Options to Strengthen National Climate Target

Indonesia is the eight largest GHG emitter globally, contributing to 4 percent of global GHG emissions, mainly sourced from forestry and land-use and energy sectors. The archipelago is among three countries that adopted more stringent target during the transition from INDC to NDC. Through the submitted NDC, the GHG target is translated to a lower level of absolute emissions in the target year, from 2,881 MtCO2e in the INDC to 2,869 MtCO2e in NDC. However, the overall target of reducing emissions remains the same at 29 percent unconditionally and 41 percent conditionally.

Despite the revision, latest science shows that the government has not been ambitious enough in developing its climate actions plan. This threatens Indonesia to significantly contribute to the global efforts in limiting temperature rise well below 2 degree, or not more than 1.5 degree Celsius above pre-industrial level if the latest IPCC report is used as the reference.

Over the past 5 years, the government has focused in achieving social and economy targets, through infrastructure development, strengthening local economy, improved law enforcement, and education. These priorities, of course, are critical for the life of people, but environmental priorities are unfortunately lacking from the nine priority programs of President Jokowi – so called Nawacita.

The government reported that they have achieved 10.7 percent and 24.4 percent of emissions reduction in 2016 and 2017, respectively, as part of 29 percent target. However, the verification process is somewhat missing from the report, and further study is required to have more transparent information.

How ambitious is Indonesia’s NDC?

To comply with 1.5 degree target, Indonesia has to reduce its carbon emissions starting from 2020 and to reach net zero emission by mid-century. The UN Secretary-General António Guterres has been calling world leaders to come with concrete, realistic plans to enhance their NDC’s by 2020 for reducing greenhouse gas emissions by 45 percent over the next decade, and to net zero emissions by 2050.

Only in 2017, the government launched low carbon development initiative and released the first ever LCDI report exploring policy options for Indonesia to achieve high economic development and to reduce GHG emissions up to 43 percent by 2030. This report highlights an opportunity to achieve ambitious emission reduction targets by focusing on land and energy sectors in the policy development. The most ambitious scenario named as LCDI-Plus, however, does not address the 1.5 degree target. The analysis shows that Indonesia will only peak its emission between 2025 – 2030 and will not achieve net zero emission by 2050.

Independent analysis from Climate Actions Tracker (CAT) assesses Indonesia’s NDC as highly insufficient, as CAT analysis mentioned that Indonesia may be able to achieve its NDC targets, but there are many obstacles needed to be tackled properly, including to peak the emission around 2020 and sharply declining until 2050. 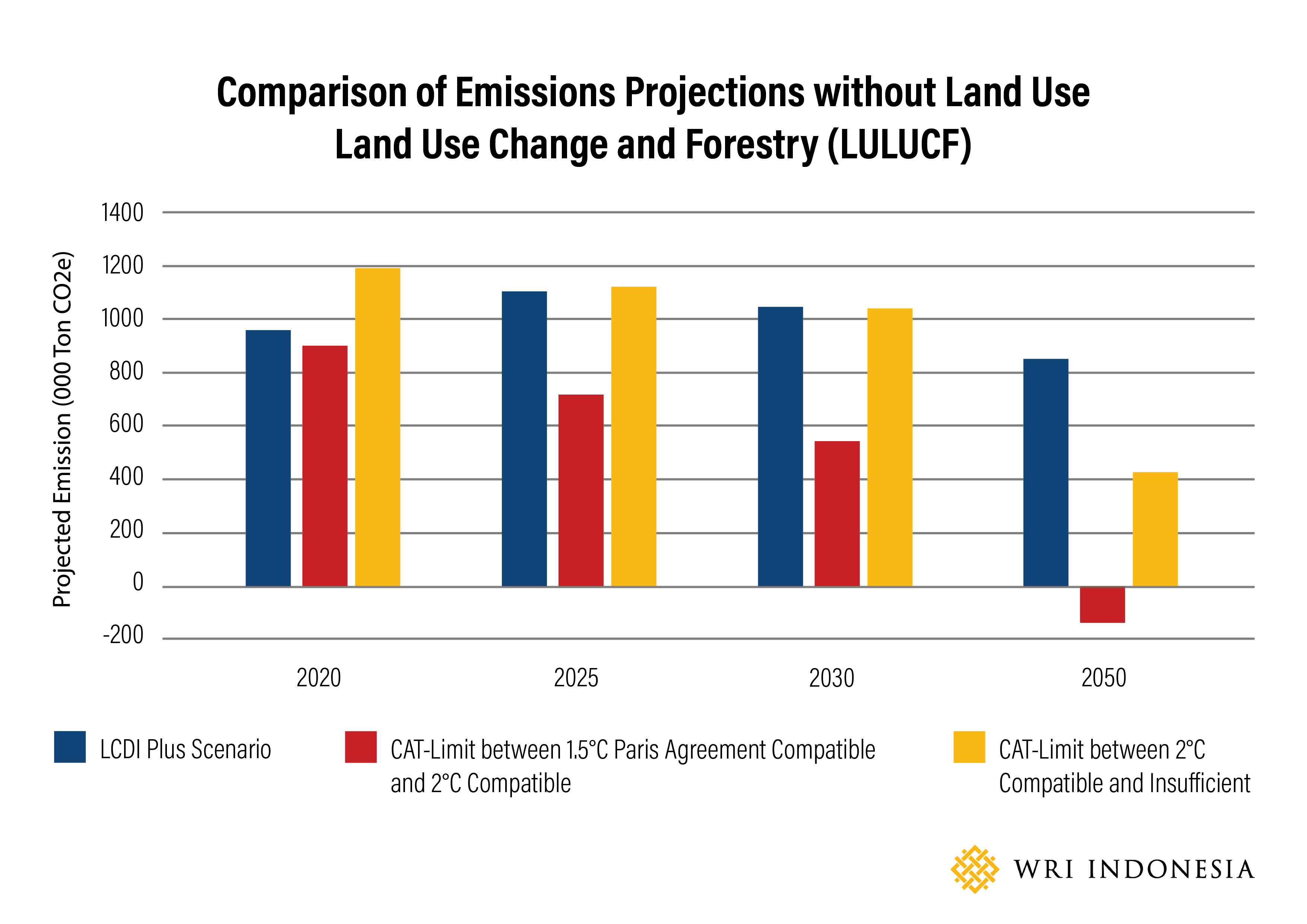 The comparison of these emission figures does not include forestry and land-use sectors, which potentially could spike in the future, in case severe fires incidence may happen again during the El Ninõ dry season.

Cross-sectoral policies involving both state and non-state actors must be aware of the dire of climate emergency, and they should commit to strengthen climate actions and ambitions. The policies should include the following.

1. To enforce the forest and land-use- and energy sector policies as laid out in the Indonesia’s LCDI report. The most ambitious LCDI scenario could achieve 43% of emissions reduction by 2030, or total emission is limited to 1.05 GTCO2e. To align with 1.5 degree objective, Indonesia has to limit its emissions half of that number by 2030. The extension of land-based policies should include the permanent banning of primary forest and peatlands conversion, extending moratorium policy to include secondary forest, enforcing better peatlands ecosystem management and fires mitigation policies. In the energy sector, moving away from fossil fuels energy coupled with energy efficiency, shifting to electric vehicle, and boosting green infrastructure, would significantly reduce energy sector’s emissions. The private sectors’ and states’ commitment to shift to 100 percent renewable energy must receive strong political support, and even going beyond that, which is to achieve zero-carbon energy would be more beneficial for our climate.

2. Provincial pledged to conserve big swath of natural intact forest. A public pledge such as Manokwari Declaration although this is a non-binding effort, but when it was declared publicly in front of national and global audience the pledge conveys a strong and ambitious drive to combat climate crisis. All concerned stakeholders who aspire to keep the temperature rise below 1.5 degree has been rallying behind such a pledge. Our analysis shows that conserving a minimum of 70% of Indonesian’s Papua forest will keep at least 14 GtCO2e on the ground. In current carbon market value, this is worth of around 70 billion USD which enable Papua Provinces to plan for a new low carbon economy aligning to the national LCDI.

3. Sub-national, cities government and businesses should have solid commitments to mitigate the impacts of climate crisis. Medium and short-term development planning at province or city level should consider climate mitigation and adaptation targets, and additional climate investment should tap potential sources from public and business sectors, also crowd-funding mechanism. Several key districts in Indonesia have been committed to implement jurisdictional approach to shift away from unsustainable commodities, like oil palm, to achieve economic, environmental and social targets at the same time. These initiatives should be a modality to aim for zero net emissions by mid-century.

4. Local regulations mitigating climate emergency aiming to improve individuals life quality. Climate crisis at local level may be linked directly to deteriorating public health. City of Jakarta has been experiencing severe air pollution over several months leading to a civil lawsuit to the government. The governor of Jakarta recently released a new regulation to reduce air pollution and to improve public health. The efforts include revitalizing public transportation, tightening emission and pollution regulation and monitoring, tree planting, and shifting to renewable energy technologies. If successful, this will significantly reduce carbon emission in Jakarta, in which over 70% of the emissions are associated with transport and manufacturing sectors.

Climate change should not merely be a narrative for discussions at global or national level, because it also effects our individual life. Tackling the climate crisis and to limit global temperature rise below 1.5 degree should be the responsibility of every one of us. This is not an easy task, rather we have to do the impossible almost every day. But this is the race that we can win, this is the race that we must win, as this Planet Earth is the only home for us.