Food and Land Use (FOLU) Manager 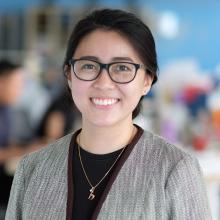 In this role, Gina is responsible to build trust and collaborative work between the stakeholders involved in the FOLU Indonesia coalition and position the coalition strategically with key counterparts in Indonesia. Working closely with national and global team and partners, we shape strategic partnership to assist the government of Indonesia in achieving the Low Carbon Development Initiative (LCDI) through accelerating the food and land use system transformation.

Prior to joining WRI, she spent six years at ICLEI – Local Governments for Sustainability assisting multiple cities/regencies in Indonesia to shape local climate actions and bridge it up to the national governments in ensuring its contribution to the national NDCs. Starting 2017, she served as the Country Manager/Chair of the Executive Board of ICLEI Indonesia. Before ICLEI, she briefly served the President’s Office (UKP4) as the National Support Officer for the Low Emission Capacity Building (LECB) project under the procurement of UNDP. Later, LECB became the founding initiative for Indonesia’s LCDI.

Gina holds a MSc in Environment and Development from the London School of Economics and Political Science (LSE) in UK as a Chevening awardee. She received her bachelor’s in International Relations from Universitas Pelita Harapan. She is a certified Urban Greenhouse Gas Inventory Specialist from City Climate Planner program. Throughout her time as youth activist until her professional career, she is humbled to get opportunities to observe several UN climate negotiations from various perspective, either as part of national youth delegation, Major Group of Children and Youth (MGCY), as well as Local Governments and Municipal Authorities (LGMA).

Gina loves spending her leisure time the most with her family and being a “freelance” tutor to her forever-young mom that is catching up her first bachelor’s degree at her late-50s.