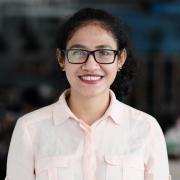 Martha is a research analyst for Papua and West Papua Office of WRI Indonesia.

She supports in research, analysis, project management, and stakeholder engagements in Papua and West Papua Provinces. She contributes to the development of research products that are designed to inform targeted audiences and facilitate program management and development. She is reporting to the Papua Regional Manager of WRI Indonesia, she coordinates with other key personnel of the projects. She also provides support in research analysis and necessary stakeholder engagement activities to achieve the intended targeted impact on some WRI Indonesia’s Projects in Papua and West Papua Provinces.

In her free time, she enjoys doing sports, such as jogging, going to the gym, and playing futsal.