Conservation practices are part of communities’ daily life in Kaimana, West Papua. For fishing activity, for instance, the coastal communities in Kaimana implement a local knowledge called Sasi laut, a closed practice fishing system aimed at maintaining an adequate fisheries stocks. Being passed down through generation, sasi laut is a local conservation practice that combines local management system, local classification system and local belief system to manage and protect specific marine resources. Sasi laut usually opens around two weeks to three months and closes for one to two years. The coverage expands across Kaimana waters without the exact coordinate – the boundaries are determined by local judgment.

Sasi laut and other conservation practices entail social-ecological complexity, in which different values are interlinked in cultural systems. Mental models framework offers an approach to understand interconnected meanings between dimensions within cultural systems. Using mental model that comprises of corpus, praxis and kosmos, we can understand how local wisdom in sasi laut is being implemented by the communities. A mental model is an explanation of someone’s thought process, influenced by the person’s own knowledge to interpret and understand the world and reasoning against events that occur in their lives. Corpus refers to the local cognitive and classification systems, praxis can be defined as local management systems, and kosmos is all the things related to local beliefs, symbols and rituals.

Praxis, corpus, and kosmos in sasi laut represent local knowledge that is used to manage and protect fishes and other marine resources. Praxis is applied in sasi laut through the petuanan system, ancestral ownership of a specific location by a family. The role of petuanan in sasi laut is to regulate the classification of marine biota for protection and to perform the rituals. Corpus is applied in sasi laut by focusing the protection on specific marine biota. In Kaimana, the focus is on lola (shellfish - Trochus sp.), sea cucumbers (Holothuroidea), and siput batulaga (clay slugs - Turbo marmoratus). Before conducting sasi laut, they perform a ritual called sinara, that represents the dimension of kosmos. This ritual is carried out by giving offerings of dishes (e.g., betel leaf, areca nut, lime betel, chicken, and eggs) followed by prayers, asking for blessing from the spirits of the ocean. These three dimensions are interconnected and mutually support each other in the mental models and form a traditional coastal management and protection system. 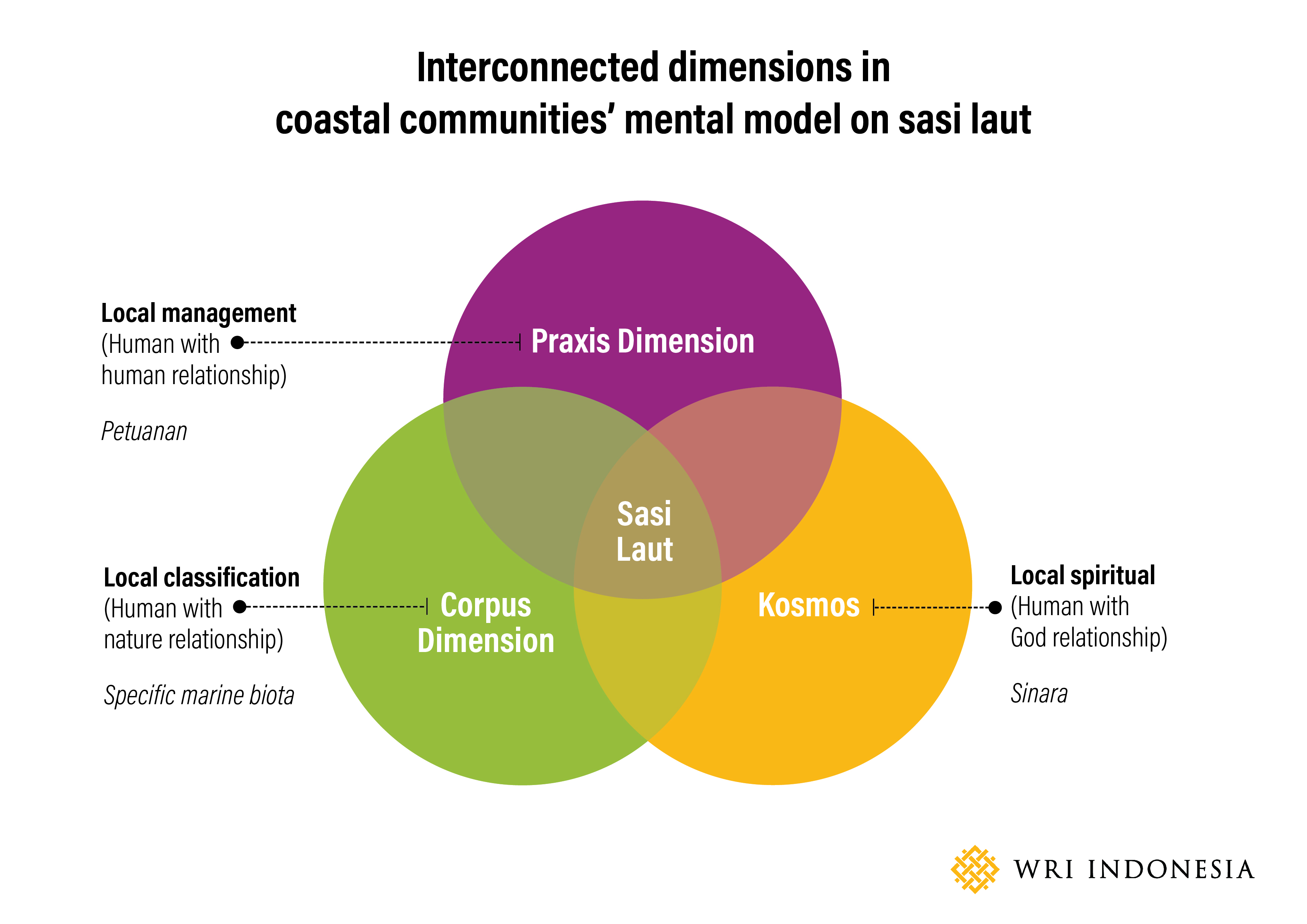 The Urgencies to Incorporate Local Knowledge into Conservation Program

Despite its importance to conserve marine resources, the practice of sasi laut has been facing some challenges, one of which is a violation by outsiders. Outsiders often did not go through the petuanan mechanism when they are fishing in a specific territory. In other cases, they fished the sasi biotas when the system was on closed season. When such things were conducted by the local, the violator received penalty and social punishment from the customary leaders. However, when an outsider performed such acts, it is difficult to punish the violator. In most cases, the violator did not get caught, or even if they did, the violator cannot be punished because the sasi laut arrangement does not exist in the legal system. The situation is exacerbated by the fact that sasi laut is only widely known verbally – never laid out in a written format.

Incorporating local knowledge into formal policy will be advantageous to ensure livelihood, natural resources protection, and achievement of government’s targets. Such targets include the West Papua declaration that aims to protect 70% of the province area to be conserved and the Convention of Biological Diversity (CBD) ratification, specifically the Aichi Target, that has an overarching target to maintain biodiversity for the welfare of the communities. In this case, the prevention of sasi biotas exploitation can safeguard the ecosystem balance, and ensure marine resources sustainability, which is central for communities’ livelihood.

First, making a written documentation of sasi laut system. Since it is important for sasi laut system to be explained well to the people interacting with the marine resources, such as the local government, private sectors within the area, NGOs, and among the coastal communities especially youth. Many practices based on local knowledge are starting to disappear in the eastern part of Indonesia as the result of unwritten arrangement. Hence, making a written documentation of the local wisdom is key. Dialogues between local community groups and the younger generation are also needed to pass the values of sasi laut through the generations.

Second, the coastal communities conducting the local wisdom need to be acknowledged, for instance through recognition by the government as customary communities. Once institutionalized, the coastal communities will be considered in coastal-and-small-island-zoning-plans and can even have their own designated area. This means the communities will have the authority to govern their customary areas and get allocated funding from the national government for management and operations.

Third, biodiversity conservation programs should include elements of human well-being (e.g., cultural identity, spiritual health, and sustainable livelihoods) in its formulation. To accomplish that, researchers should conduct more research on various dimensions of local knowledge within local communities’ mental models.

Incorporating mental models into conservation designs brings the opportunities to identify which approaches are appropriate to cater to the diverse needs of the communities while conserving our nature at the same time.