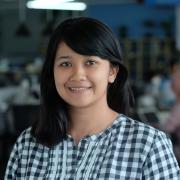 Carolina Astri is a Gender, Equality, and Social Inclusion Research Analyst at WRI Indonesia. Prior to serving her current position, she worked as a conflict transformation analyst and researcher for Wahana Riset Indonesia, specializing in anthropological studies of the One Map Initiative and customary forest communities.

She earned her master's degree in Faculty of Cultural Science, Gadjah Mada University (UGM). She also received a research scholarship from the University of Oslo to write a thesis about the REDD+ scheme in West Kalimantan. During her stay in Yogyakarta, Astri actively participated in Yayasan Kampung Halaman. She also worked as a researcher in Community Resilience and Economic Development (CaRED), a collaboration project between UGM and MFAT New Zealand in West Papua.

Astri holds a bachelor's degree in cultural anthropology from Universitas Gadjah Mada. In her spare time, she enjoys reading and traveling.