Versatile, inexpensive and extremely efficient to produce, palm oil is in demand across the planet. This high-yielding vegetable oil is used in thousands of everyday products, from processed food to cosmetics, as well as for biofuel. By 2045, Indonesia aspires to produce an estimated 60 million tonnes of Crude Palm Oil (CPO) annually. But without new approaches to cultivation, the thirst for this commodity could have devastating consequences.

In Indonesia, which currently supplies 61 percent (36 million tonnes) of the world’s palm oil, the rush to grow it poses grave dangers for the country’s forests and peat lands, which are being cleared for plantations. Between 1995 to 2015, the country lost 2.3 million hectares of forest for oil palm plantations. If Indonesia is to keep up with its national target, it will need to increase its palm oil production by 2045; under current practices, this would require approximately 8.2 million additional hectares for cultivation – an area the size of Papua Island. Clearly, a new approach is necessary.

Indonesian oil palm plantations are already being highly scrutinized by the global market and criticized for their unsustainable agricultural practices. In response, the government has pledged to shift the current business model and make 70 percent of palm oil sustainable by 2020. Policies will be soon enacted to achieve this target, including zero-deforestation and oil palm permit moratoria. Such actions, however, may have the effect of decreasing palm oil production.

To bridge the gap between production goals and environmental protection, Indonesia can pursue a new course for palm oil: optimizing production and productivity without opening more land for cultivation. Studies have shown that this approach, known as intensification, has a huge potential to increase Indonesian palm oil yields. It can prevent drastic production declines and maintain Indonesia’s competitiveness in the global palm oil market.

The Indonesian government has started by focusing on smallholder farmers, given their pivotal role in Indonesia’s oil palm sector. In 2015 alone, these smallholder farmers managed up to 40 percent of the total oil palm plantation area in Indonesia, contributing 34 percent of CPO production nation-wide. Their yield, however, is 50 percent lower than that of large-scale commercial companies. Lack of knowledge on Best Management Practices and limited access to high-quality agricultural inputs are the biggest barriers commonly identified in smallholder cultivation practices. Addressing these needs creates a huge opportunity to produce more palm oil through an intensification program.

The Directorate General of Estate Crops, Ministry of Agriculture, argues that palm oil companies and smallholder farmers have the potential to generate palm oil productivity by as much as 8.4 tonnes of CPO per hectare per year through yield intensification. This can be carried out by implementing Best Management Practices in underperforming mature oil palm stands. These include, but are not limited to, using high quality seedlings, applying sufficient quantities of fertilizer, controlling pests and diseases and managing the crops during the immature phase.

Of the total 4.7 million hectares of plantation area managed by smallholders in Indonesia, 1.7 million hectares are located in the forest area. Therefore, only around 3 million hectares of smallholder area outside the forest area can be prioritized by the government for intensification. Using the ideal productivity of 8.4 tonnes of CPO per hectare, we estimate that Indonesian smallholders can produce approximately 25.6 million tonnes of CPO annually through intensification undertaken outside forest areas. Smallholders could supply up to 71 percent of the current national palm oil production and 43 percent of projected production by 2045 if sustainable intensification techniques were implemented. Since this percentage is equal to the current proportion of smallholders’ plantation area, the rest of the target production (57 percent) could be fullfiled by companies, if they also implement the same techniques. 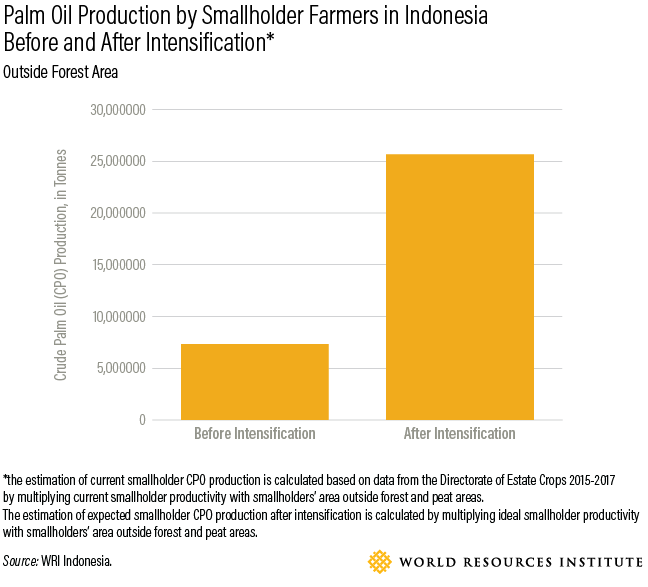 To ensure the smallholders can reach this ideal situation, an institutionalized and systemic transformation within the national governance system is strongly needed. These comprise regulatory framework improvement, multistakeholder collaboration along the palm oil supply chain and enhancement of smallholder capacity.

At the end of the day, a successful shift to sustainable intensification can help Indonesia achieve two victories: it can quadruple oil palm production by smallholder farmers, which can eventually improve smallholders’ income, and significantly prevent deforestation and peat degradation from palm oil expansion by 8.2 million hectares. Investing in intensification thus has the potential to protect the environment, bridge the gap between current production and future demand, and provide a secure future for smallholder farmers who rely on palm oil for their livelihoods.