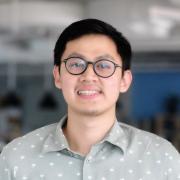 Prior to joining WRI Indonesia, he studied Master's Degree at the Faculty of Law, Universitas Gadjah Mada. He obtained a research scholarship called In-Search of Balance (ISB) to write a thesis about the legal aspect of peatlands. He also interned in a Jakarta-based corporate law firm after completed his bachelor degree. During his undergraduate study, Kenny was actively involved in a moot-court competition called International Maritime Law Arbitration Moot (IMLAM), in Brisbane and Southampton.